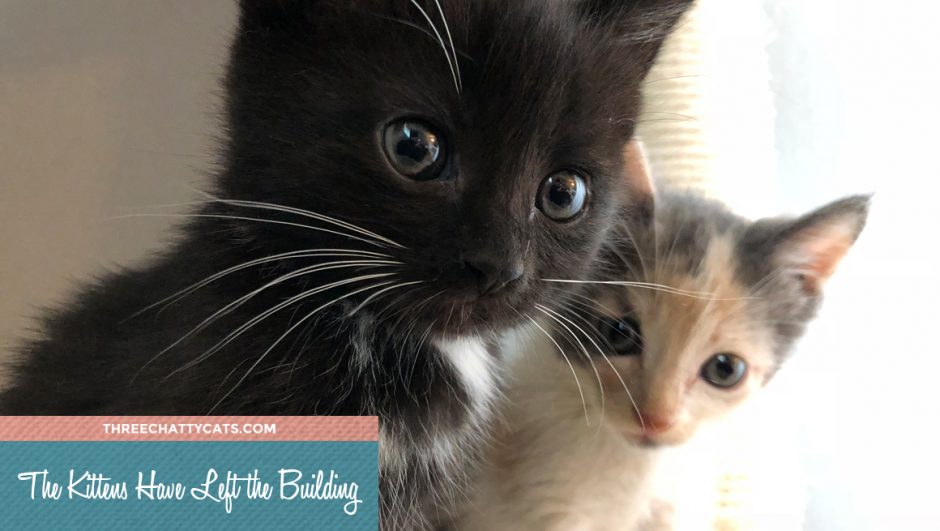 Well, I’m disappointed to let you know that we took the kittens back to Best Friends yesterday. They weren’t gaining weight and had little interest in food. And during this critical development time, it’s important that they are gaining each day. The kittens are six weeks old, but they are the weight of four-week-old kittens.

I thought at first that perhaps the decrease in weight was due to the fact that they now had an entire foster room to romp around in (and romp they did!) instead of being cooped up in a kennel at the shelter. So, it was suggested that we limit their out-of-pen playtime.

But they continued to lose weight and they just weren’t that interested in food. I tried both wet and dry, several brands, spoon feeding, syringe feeding, etc. But alas, I wasn’t successful. They did eat – just not enough to gain weight.

And to top it off, two of the kittens had diarrhea, so we thought it was best for them to go back to Best Friends before anything became an emergency. If I lived closer to the shelter, I would’ve tried to care for them longer. But because of what happened last time with our previous litter of foster kittens, I’m overly cautious. Last time, we were stuck in rush hour traffic for over two hours with a fading kitten.

This litter of kittens was playful and alert their entire stay with us. I just wish they had an appetite! I think Ross and I will stick with adult foster cats for now. We’ll be away for a short time next month, so we’ll get an adult foster when we return.

Cute As Can Be

I took a lot of photos and videos in the short time that the kittens were here with us. So, I’d like to end on a positive note and show off these cuties! I know they’ll be just fine and are in great hands at Best Friends. I’m sure they’ll go to another foster home as well. Perhaps one that’s closer to the shelter.

I’ll update you on the kittens when I hear more!

27 thoughts on “The Kittens Have Left the Building”