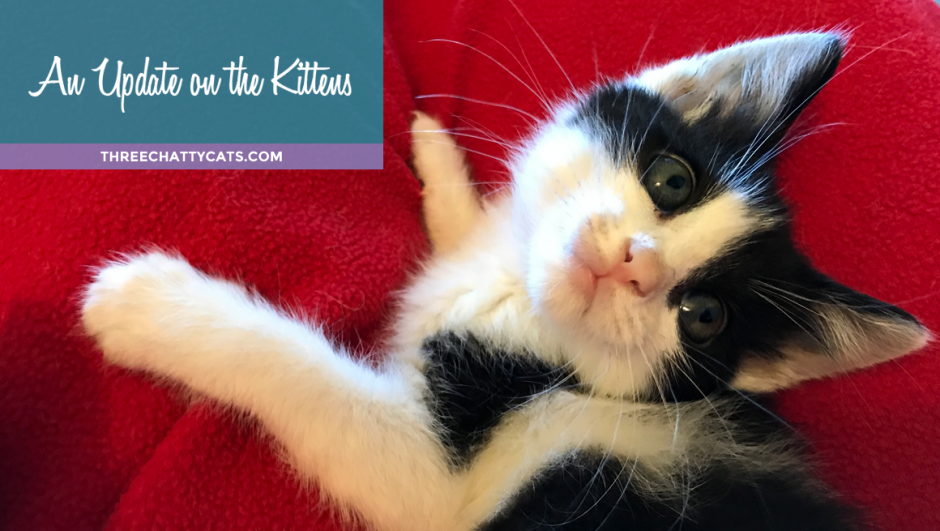 It’s with a heavy heart that I tell you that sweet little Ear Muffs, the male of the litter we were fostering, passed away on Tuesday this week at the shelter.

So sad to tell you that our little #fosterkitten Ear Muffs ran off to the rainbow bridge yesterday morning. It was completely unexpected. He appeared normal the day before, eating just fine. But yesterday morning at 4am when I got up, I noticed he was a bit lethargic. When I fed the kittens 30 minutes later, he had no interest in eating, which was quite odd for him. I called the #BestFriends emergency hotline and they advised to provide Karo syrup and bring him into the shelter. We dropped him off at the shelter to be cared for, and I received a call a few hours later that he didn't make it. There was no obvious cause. The foster team said that unfortunately sometimes this just happens with small kittens. Failure to thrive? Fading kitten syndrome? I don't know. Needless to say, I'm heartbroken. I sat with Eskimo and Evergreen later in the day, cried for Ear Muffs, and watched the other two play and groom and just be kittens. We will be taking Eskimo and Evergreen back into the shelter today so they can be observed closely and ensure they are healthy. They seem fine, are very playful, wrestle with each other and eat with gusto. But to be safe, the vet would like to see them. Since we live a decent distance away, they will stay at the shelter for the time-being. They may go back into foster, or they may stay under supervision at the shelter. We will miss the sweet babies. #Fostering definitely has its ups and downs. But overall, it is worth it. I'm sad to have experienced this extreme low so early on (if ever). But I know that's just a reality of fostering tiny kittens. We will foster again, as it is so important to do. But until then, we will hug our resident cats and find comfort in their purrs and kitty kisses. RIP, Ear Muffs.

Tuesday afternoon after we had returned home, the foster coordinator advised that the vet would like to examine the other two kittens in the litter as well, just to be safe. Since Ross and I wouldn’t be able to continue to drive up to the shelter during the week or if another emergency did arise (depending on traffic, it takes us anywhere from one to two hours to drive up, one way), we decided it would be best to return them to the shelter. So, we trekked up again Wednesday to drop them off.

Please rest assured that Eskimo and Evergreen were doing well, but of course we thought the same about Ear Muffs. I imagine that Eskimo and Evergreen will return to foster with someone who lives closer. We will likely stick to fostering adult cats or older kittens. This was our first litter of kittens, and they were estimated to be three to four weeks when we picked them up earlier in the month.

It’s been a very hard week, and we’ve learned just how hard fostering can be. Some people say they can’t foster because they wouldn’t be able to give the cats or kittens back. It never really crossed my mind that one might pass away, though. Of course I know it happens (I’ve seen it on other cat blogs), but I just didn’t realize how often it happens and for no obvious reason sometimes. And when it happens to you, it’s just devastating.

I will update you as I hear updates on Eskimo and Evergreen. Thank you for all the kind words everyone has left this week on social media.

If you haven’t already, don’t forget to enter our CatCon giveaway. It closes on Monday, August 28, 2017 at noon Pacific.

25 thoughts on “An Update on the Kittens #FosterFriday”