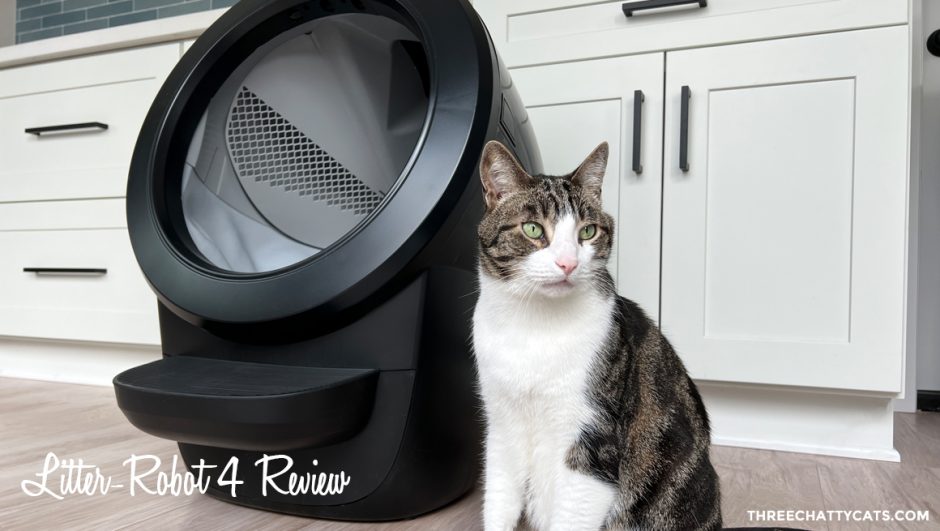 Longtime readers may know that we purchased two Litter-Robots over three years ago for our multi-cat household. And today, we’re excited to share that we were selected as beta testers for the brand new Litter-Robot 4 by Whisker, which has now been announced to the public.

In this review, we’ll go over:

Disclosure: We purchased two Litter-Robot 3 units in January 2019 and later posted a review here on the blog. In November 2020, due to the popularity of our review, Litter-Robot provided us with a discount code for readers via an affiliate link. As an affiliate, we received the Litter-Robot 4 for free from Whisker as part of a beta program to test and give our feedback. Whisker is not responsible for the contents of this review. This post contains affiliate links.

If you haven’t heard of Litter-Robot before, it’s an automatic, self-cleaning litter box that has been around for 20+ years in various forms. Litter-Robot 4 by Whisker is the latest model.

Setting up the Litter-Robot 4 is as easy as taking it out of the box and plugging it in. It comes fully assembled! The only thing you need to do regarding assembly (besides adding litter) is to put in the carbon filter. The unit comes all nicely wrapped up like a gift basket!

Woodrow and Harley were on hand to supervise the unboxing, of course.

The Litter-Robot 4 has many of the same features as the previous model.

Now, onto the exciting changes with the reimagined Litter-Robot 4!

I was most excited to learn that the Litter-Robot 4 has weight sensors. So, if you have a multi-cat household as we do, you’ll be able to keep track of which cat used the litter via the app. Fortunately, our cats each weigh a different enough amount for us to know who used the litter.

Another new feature is that the rotating globe that sifts the litter is now enclosed in the unit, making it safer for your cat. The new model has what Whisker refers to as the SafeCat™ System, which includes  OmniSense™ cat detection, with optical and weight sensors.

The various sensors do the following:

While the Litter-Robot 4 comes with a few waste drawer liners, you can also use traditional garage bags as well. Here’s a photo showing a 13-gallon trash bag instead of their provided liner.

If you have a smartphone, you can download the Whisker App and remotely control the Litter-Robot 4. You can also choose to receive notifications. The app shows how full the waste drawer is and if the litter level is sufficient. You can also review usage history. I personally don’t check the app often, but I do keep notifications on.

One area where the Whisker App may come in handy is monitoring the health of your cat since you’ll be able to check when and how often your cat uses the litter. And the weight sensors will also be able to track your cat’s weight over time, letting you know if your cat has gained or lost weight.

The below photos show that the models are fairly similar in size. A noticeable difference is the entryway to the litter – it’s much larger in the Litter-Robot 4.

Fully assembled, here are the dimensions. 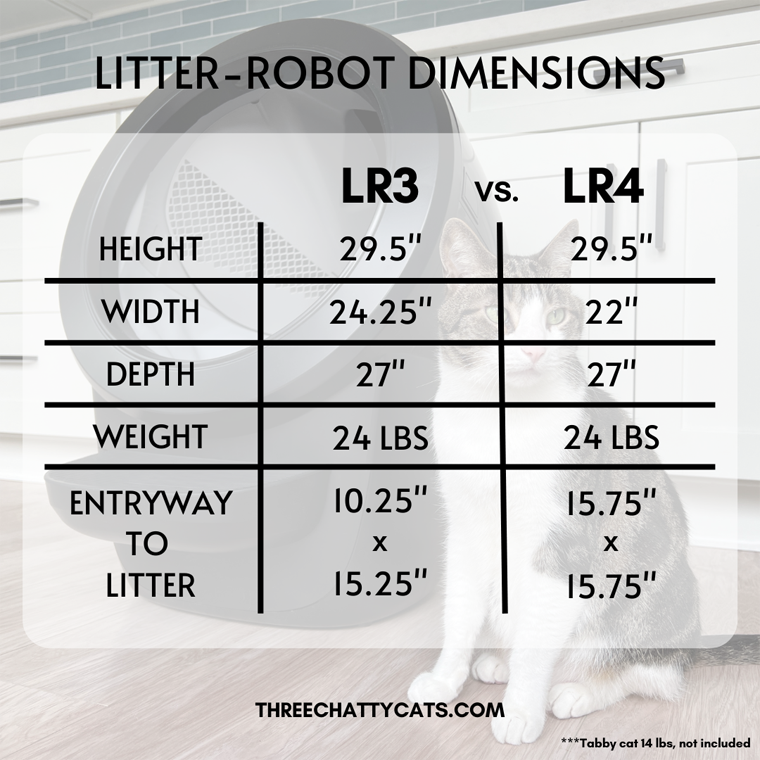 Another noticeable difference is the waste drawer. And while it may initially look smaller, the new drawer (on the right) is a tad deeper and actually holds more waste.

The Litter-Robot 4 has one big light bar that can change colors and/or flash indicators. And being higher up, it’s easier to access and read. The only downside is there are no words, so you will have to familiarize yourself with the button icons. But they’re pretty easy to understand – Power, Cycle, Reset, Empty, and WiFi Connect.

Should You Upgrade to Litter-Robot 4?

If you currently own a Litter-Robot 3, are the changes enough to upgrade to a Litter-Robot 4? The answer, of course, is that it depends. I personally love that they’ve incorporated weight sensors so I know which cat used the litter. And in a future release later in 2022, Whisker will also be adding a PetID Tag feature, further enabling it to recognize individual cats and track them with real-time insights on the app. That’s pretty neat!

But if you’re a single-cat household, there might not be enough reason to rush right out and upgrade. The main feature of both Litter-Robot models is that it’s an automatic, self-cleaning litter box. And Litter-Robot 3 gets the job done just fine.

As mentioned a few times, we’ve been using the Litter-Robot 3 model for over three years now. And in those three years, I haven’t had any issues with either unit. I’ve never had to contact customer service, and they’re both still operating without issue.

New to Litter-Robot? Which Model Should You Buy?

Whisker has advised that they will still be selling Litter-Robot 3 models as usual. So if you’re buying one for the first time, is the price difference worth it to go with the Litter-Robot 4? I’d say yes. (See below for pricing.)

I feel that Whisker has really upped the game with Litter-Robot 4 by adding the weight sensors, the larger waste drawer, moving the control panel higher, and the unit being so much quieter. It’s also nice to have a bigger entryway into the globe for the cats.

At the time of this writing, the base price of each unit is:

Both of these base prices are for non-bundled units, but they do include:

Due to the success of our previous Litter-Robot review, Whisker invited us to join their affiliate program, which allows us to offer readers a discount of $25.00 off. This discount is good on new models only, not reconditioned units.

Any questions? Ask in the comments and I’ll respond!

20 thoughts on “We tried the new Litter-Robot 4. Here’s what we thought.”