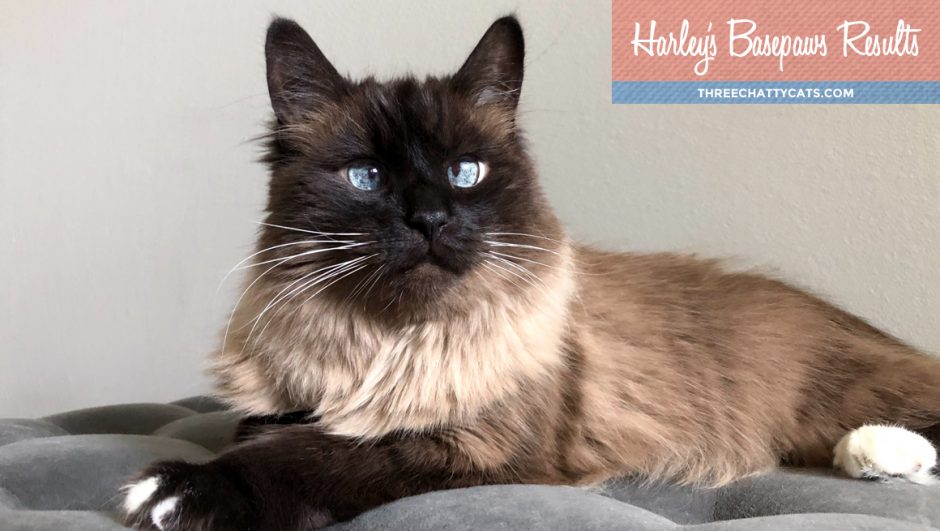 Last August, we submitted Harley’s hair samples for the Basepaws Catkit DNA test. And today, we will be sharing Harley’s results – and hosting another giveaway!

Any guesses as to Harley’s closest matching breed?

You can read our original Basepaws post to learn about how we collected the sample.

We received the CatKit free of charge from Basepaws last August in exchange for an honest review. Today, we’re sharing the results of that test. All opinions stated here are our own. Three Chatty Cats only shares information we feel would be relevant to our readers.

Last August you say? Yes, that’s seven months ago that we sent in Harley’s sample. We actually received the preliminary test results in December. However, we were told that a newer and easier to read report would be coming soon. So, we decided to hold off on hosting another giveaway until readers could see what the new and improved report would look like.

The eight-page report is nicely laid out and includes:

You can read more about the new report on the Basepaws blog. Harley’s full report is at the bottom of this post.

Before giving the results, here’s what the report said about Harley:

“We sequenced Harley’s DNA, which we extracted from the sample you’ve submitted to us. This resulted in 3,209,786 DNA fragments sequenced, which represents 403,809,857 DNA bases that were sequenced. Using this data along with the latest cat genome (felis_catus_9.0), we analyzed genetic variants across 18 chromosomes to generate this report.

If you’re like me, then you don’t know how to read a chromosome map or really what it means. But the idea behind the Basepaws chromosome map is to show you – through what the company calls chromosome painting – which pedigreed breeds are represented in your cat’s DNA through color. It’s a visual representation of the entirety of the genetic code. 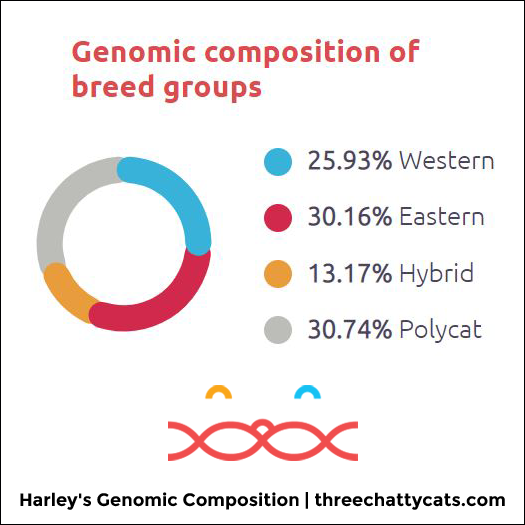 You may be asking what Polycat refers to. You can read about how Basepaws defines Polycat on their blog (think domestic mix). 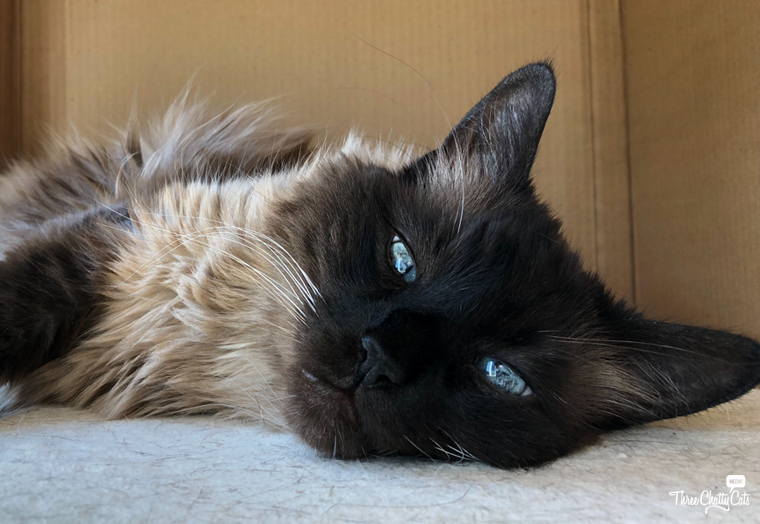 Here are some of the snippets I took away about Harley and the Siamese breed. In the genetic predisposition section of the report, it mentions:

“The pointed pattern observed in Siamese cats is a form of partial albinism caused by a mutation in tyrosinase (an enzyme involved in the production of melanin). This mutation is also linked to causing abnormal neurological connections between the eyes and the brain. As a result, many early Siamese cats had crossed-eyes.”

And yes, Harley is a bit crossed-eyed. And at times, his left eye is severely crossed. 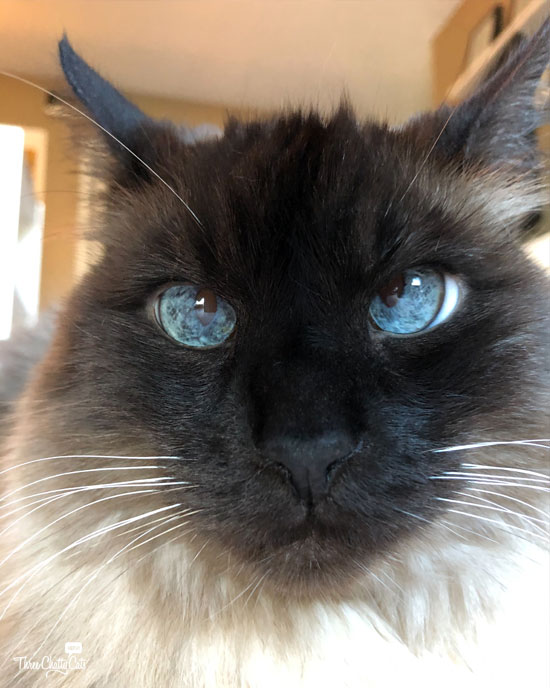 The genetic predisposition section also talks about the Siamese breed’s higher mortality and morbidity rates than other breeds – and that they’re prone to lung infections, feline OCD, vestibular disease and Feline Hyperesthesia Syndrome. All things that I won’t worry about, but I’ll keep in the back of my mind.

In the personality section, the report notes:

“Siamese are very affectionate and intelligent cats, with a distinct outgoing nature. They seek and enjoy the company of humans as well as other cats. They will often strongly bond with one person in the family. These kitties are very vocal and will often demand your attention with a loud, low-pitched persistent voice nicknamed as ‘Meezer’.”

Harley seems to adhere to the “strongly bond with one person” point – and he is also pretty vocal when he wants something (remember that yowl I shared the other day?).

Overall Thoughts and Looking Ahead

When I wrote about Basepaws last year, readers seemed interested to know about Harley’s breed – and what details the test results might hold for their own cats. However, the long wait times for the results were brought up as a concern, which I feel is a valid point.

Currently, the company states that the turnaround time is 8-12 weeks from the time the sample is received in their lab.

Regarding our results… When we adopted Harley, our vet assumed he was closest to Siamese. The Basepaws results match that assumption. So while I’m not surprised at his results, I still think it was fun to go through the process and know for sure. 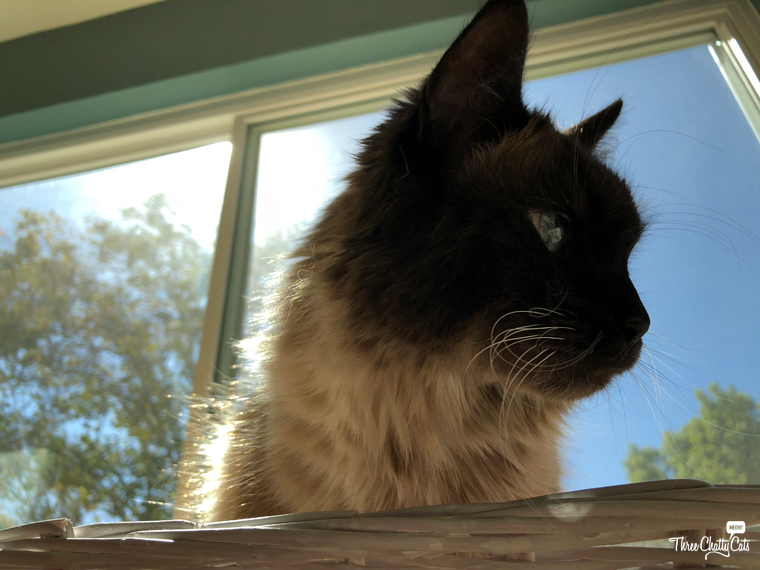 And while Basepaws does not market itself as a breed test, but rather a genetic test, I do think the Catkit will appeal mostly to those simply curious about the breed of their cat. And in knowing that, they’ll be able to research any genetic predispositions as well.

What I like about Basepaws as a company is that they’re furthering the science and study of cats. Anything that aims to better understand cats and their health gets a good mark in my book. In fact, if you’re interested to see if your cat qualifies to participate in their research study (and receive a free Catkit), you can visit basepaws.com/science. In order for their company to grow and provide additional health results to customers, they need to expand their database of DNA.

Which brings me to my last point. Basepaws is not a one and done result. Customers will continue to receive updates to their cat’s report as the Basepaws database grows and they make new discoveries.

If you already submitted your cat’s DNA sample to Basepaws and you’re waiting for your results, I was advised that the new report has already been sent to their customers, and takes 8-12 weeks from the time the lab team receives the sample (as noted above). And if you have yet to receive the updated report, that means Basepaws is re-sequencing your cat’s DNA sample for more accurate results (which is what they did with Harley’s sample and why I chose to wait until now to share his results).

Basepaws has been kind enough to offer our readers a discount code. Regularly $95.00 (USD), our discount code is good for $10 off.

Basepaws is allowing us to give away one CatKit to two lucky readers! That’s right, two winners will each receive one Basepaws Catkit. Simply enter a blog comment below and then enter the giveaway. The giveaway is open to residents in the U.S. and Canada!

The giveaway is open to residents who reside in the United States and Canada, 18+ years of age, except where prohibited by law. Two winners will be selected randomly by Rafflecopter and contacted via email. Each winner will have 48 hours to claim their prize. Failure to do so will result in forfeiture of the prize, and a new winner will be randomly selected by Rafflecopter. The giveaway closes on Sunday, March 31, 2019 at 5pm Pacific.
a Rafflecopter giveaway

A quick note on the Birman breed match for Harley. Birmans have white paws that almost look like gloves. Harley doesn’t have full gloves on all four paws, but you can see how he might match the Birman breed with some of his paws. His back paws are all white, and his front paws have white “fingers” on them.