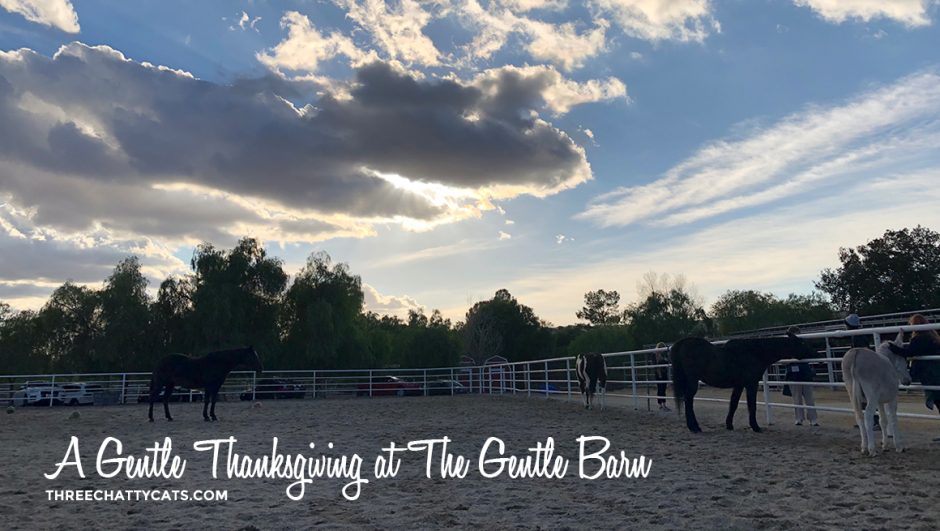 For Thanksgiving this year, I attended an annual event called A Gentle Thanksgiving that is hosted by The Gentle Barn, a sanctuary that rescues animals from severe abuse and neglect. While it’s mostly farm animals, they have also rescued and cats and dogs.

The Gentle Barn, which opened its first sanctuary in California in 1999, now has a total of three locations: Santa Clarita, California (where we visited); Knoxville, Tennessee; and St. Louis, Missouri. They consider themselves more than just an animal rescue and sanctuary. Founder Ellie Laks promotes protecting the planet, connecting people with nature, and helping both animals and children alike – ultimately moving toward peace on earth.

“Teaching People Kindness and Compassion to Animals, Each Other and our Planet.” gentlebarn.org

Each location hosts A Gentle Thanksgiving event, which allows sanctuary visitors to visit with and feed the animals before sitting down to a vegan dinner. The evening also includes live musical entertainment and a silent auction.

My mom suggested we attend the special event, which Ross and I were more than happy to do. While none of us are vegans, we are all vegetarians and thought it would be an interesting and meaningful way to spend Thanksgiving.

By far the best part of the day was meeting the animals. We met horses, donkeys, cows, turkeys and chickens. The goats weren’t part of the meet and greet, but I saw them from afar. My mom also met a pig, which I somehow missed.

You’ll see in the video below that there’s a horse struggling a bit to stand back up. He had just finished plopping down, rolling over and letting out a few toots. 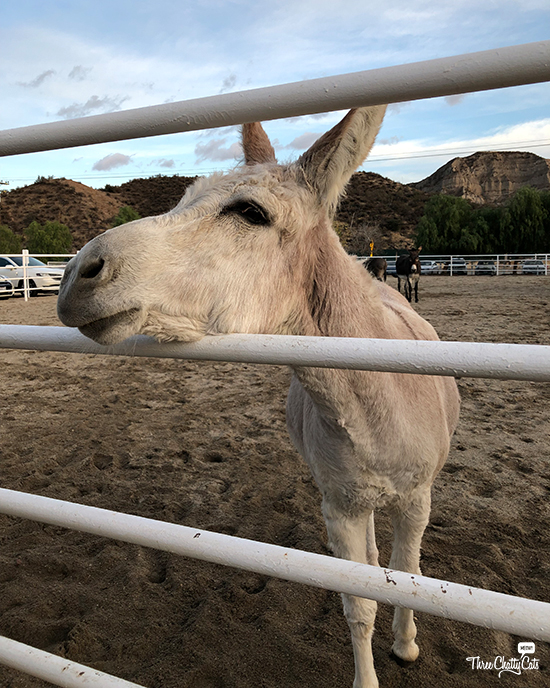 And handsome Magic the horse. 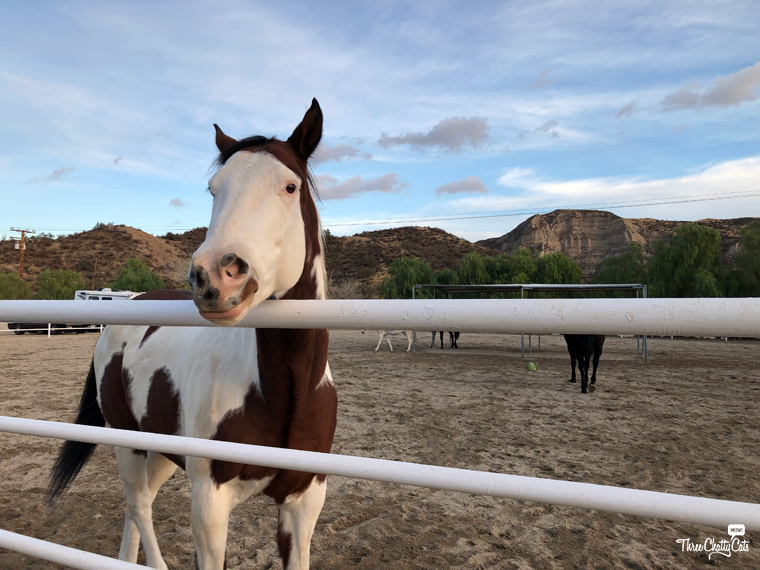 The donkeys and horses playing and chasing each other. 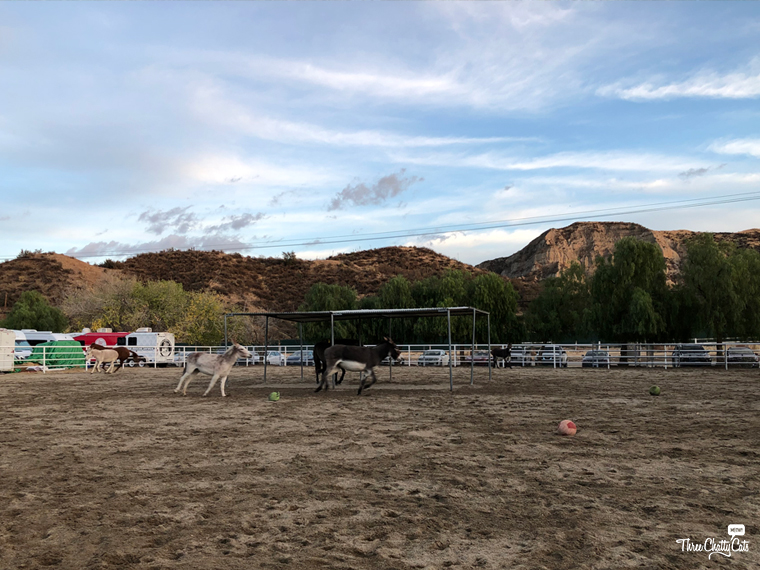 And here’s Ferdinand the bull. He has a sad rescue story, as most all of them do. Ferdinand was rescued from a slaughterhouse as a baby, but his mom didn’t make it out with him. Upon arriving at The Gentle Barn alone and terrified, he cried nonstop for his mom for three days. After his quarantine period was over, he was placed with Lucy, an older cow. She loved him immediately and the two took to each other as if real mother and son. And amazingly, Lucy produced milk for Ferdinand so he could nurse! She still nurses him and grooms him every day.

The property was decorated nicely. Here’s the pathway before and after dinner.

Since I’m a better photographer of cats, not food, I don’t have anything to show from the dinner, which took place inside of a large event tent. I estimated there to be about 150 guests. The field roast, which was in place of turkey, was pretty good! And then, of course, there were all the other traditional sides – just vegan versions. They also sent us home with goodie bags full of vegan items from the night’s sponsors. 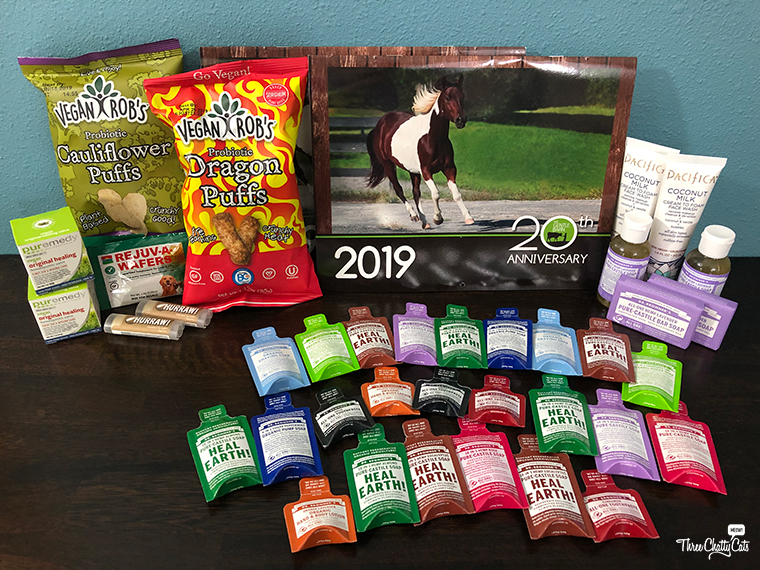 So, that’s how I spent my Thanksgiving. You can follow The Gentle Barn on Facebook and Instagram. And of course, you can visit The Gentle Barn website to learn more about their three sanctuaries and rescue missions. 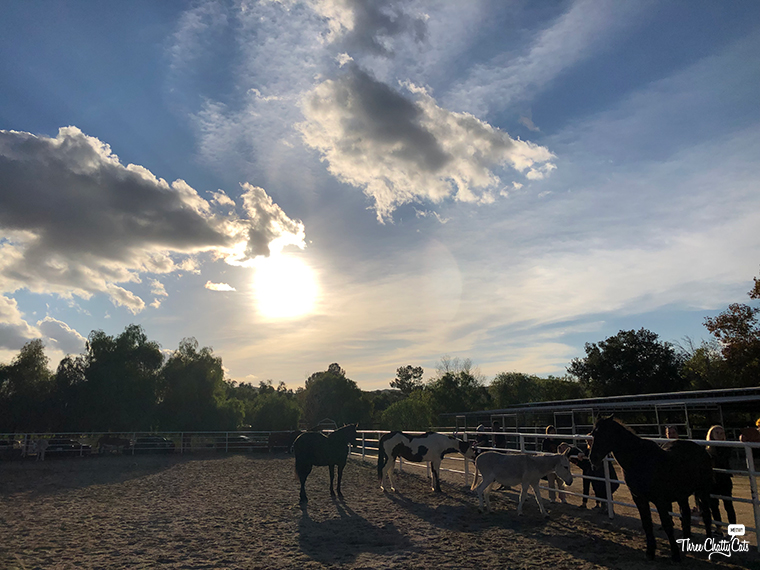 17 thoughts on “A Gentle Thanksgiving at The Gentle Barn”