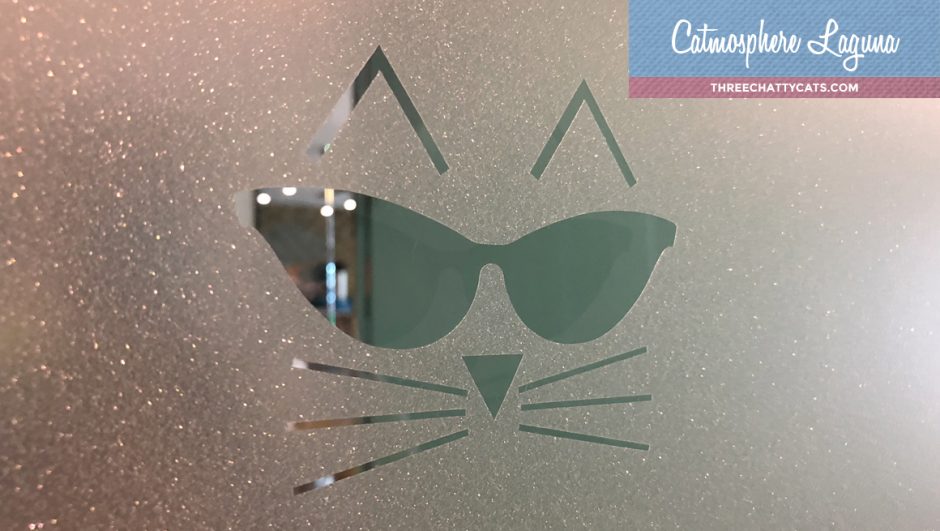 Living in Southern California, I’ve been fortunate enough to visit a few cat cafes in the area. But imagine my delight when I learned about Catmosphere Laguna – Orange County’s first cat cafe – located in Laguna Beach, California, and right here in my neck of the woods. 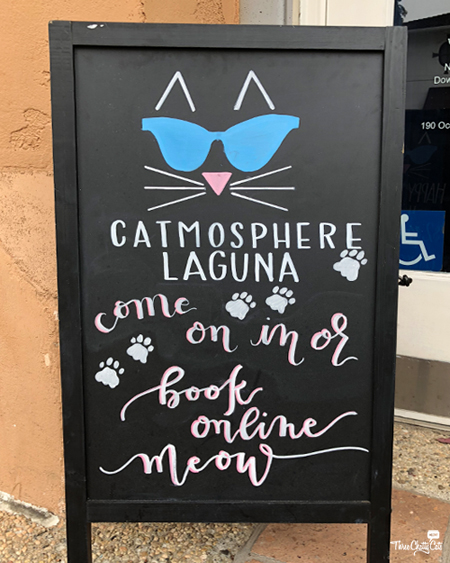 I had the pleasure of visiting Catmosphere Laguna this past weekend with my husband and a cat-loving friend. As soon as you enter, it’s clear that founder Gail Landau created a wonderful space in what’s known as the kitty lounge, which acts as a temporary foster home for the cats and kittens that are up for adoption.

Having opened about one month ago on August 13, 2018, six cats have already been adopted, with a seventh adoption pending. Catmosphere Laguna is a non-profit cat cafe and adoptions are done directly through Catmosphere.

The kitty lounge usually has 10 to 12 cats and kittens, and visitors pay by the hour, with a maximum of two hours allowed per visit. If you’re interested in visiting, reservations are recommended, but walk-ins are welcome if space allows.

Although we did not partake in the food or beverage offerings (we were there mid-morning), the selection looked delicious. What I like about Catmosphere is that there’s actually a cafe included. Some of the other cat cafes I’ve visited don’t have a true cafe at their location (due to zoning/permit issues), and they bring you food from offsite. But not here!

Catmosphere’s cafe is completely separate from the lounge (with a separate entrance for both sections), and diners can watch the cats through a floor-to-ceiling glass wall if they don’t want to enter the lounge with their food.

There are even some regulars who stop by the cafe in the mornings just to eat or drink and not visit the cats. That’s the sign of a good cafe! These photos are just some examples from their cafe menu.

While we were visiting the cafe, the owner of Catmosphere Laguna, Gail Landau, happened to be there greeting all of the guests. A warm and welcoming, cat-loving lady, Gail happily spoke with me about her experience opening Catmosphere Laguna.

Gail first visited a cat cafe in Charleston, South Carolina, and realized she wanted to open Orange County’s first cat cafe in her town of Laguna Beach, California. She says, “In Laguna Beach, we love all things nature and unique, creative ideas.” Sounds like a perfect place for a cat cafe!

In speaking with Gail, I was surprised at how quickly she was able to open the cafe. Her first meeting with the City of Laguna Beach was on June 7, 2017 – and Catmosphere opened their doors just over a year later on August 13, 2018. Gail credits the smooth process to the fact that she is an attorney, saying, “I was able to navigate the licensing and permit processes of the City, County, and State more effectively.”

Gail has volunteered in the rescue world for many years and has a good sense of what rescue work requires. Also, growing up in Northwest Illinois, surrounded by land and animals, Gail was no doubt inspired by her own mother who was a “rescue lady” herself.

While Gail has the cats at the cafe to keep her company, at home she also has a 24-pound rescue Snowshoe, Mr. Misaki, and a tiny, fluffy black cat, Shlomo, who was found hiding under a dumpster and rescued by Gail’s daughter Sasha. (Yes, apparently rescue runs in the entire family!)

The Cats of Catmosphere Laguna

Now, let’s meet some of the cats that Gail and her team have rescued and who reside in the lounge until they find their forever homes.

During our visit, there were four black “teenage” kittens romping around the lounge. What’s nice is that all of the cats wear collars, so you can easily identify which cat you’re playing with and later inquire about adoption (if interested).

Check out JP on the left and Ozzy on the right. Note Arthur peeking out from behind the cat tree on the right as well.

About Arthur…he is available for adoption as a bonded pair with Tostito (who is making sure guests take note of the rules below).

At about a year old, Arthur was found outside protecting three kittens – one of them was Tostito. Two of the kittens were adopted, but Arthur continued to care for Tostito and they went to a foster home together. Now at Catmosphere Laguna, Tostito has grown into a handsome mancat, and he and Arthur will need to be adopted together.

Arthur is a curious and friendly lap cat who loves ear rubs. While we were at the cafe, he also enjoyed this brushing session courtesy of my friend.

Here’s Arthur relaxing after his brushing. 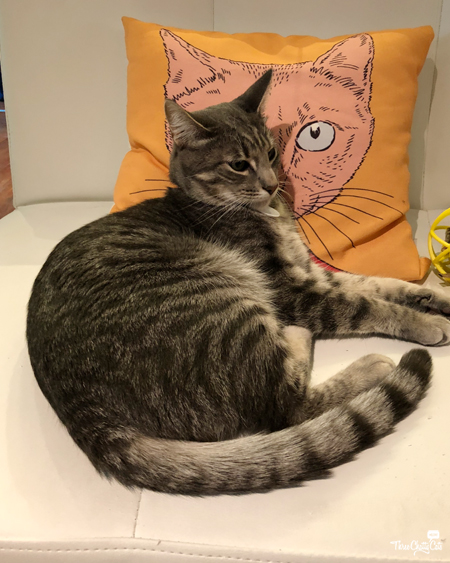 Catmosphere’s decor is super cute, too! Look at this door that leads to the cats’ private area for when they need a rest.

Kit Kat, the shyest of the group, made the rounds and then decided to hang out in this adorable cat bed. She is the one who watched us through the window before we entered, likely sizing us up.

Here’s a video of Joey (tabby) and Ozzy (black) during their morning wrestling session.

Joey is deciding if he’s had enough playtime after his wrestling match. 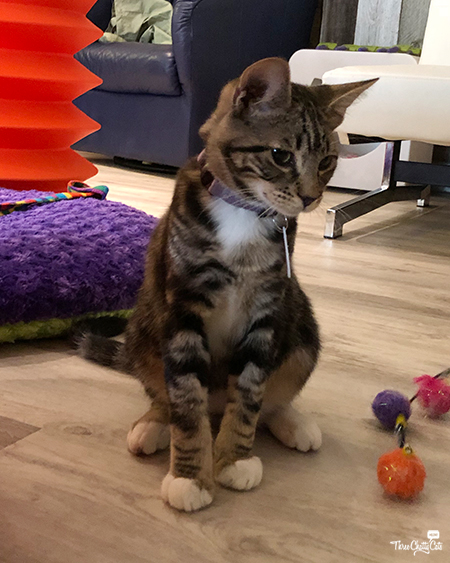 This black kitten (couldn’t see his collar) took a snooze break toward the end of our visit – the only one I saw that actually slept while we were there. 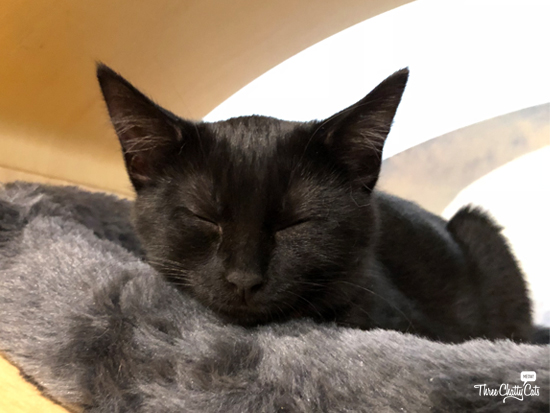 Tostito (of the bonded pair with Arthur) smiled down on us during most of the visit. Looks like he’s happy at Catmosphere until his forever human arrives. 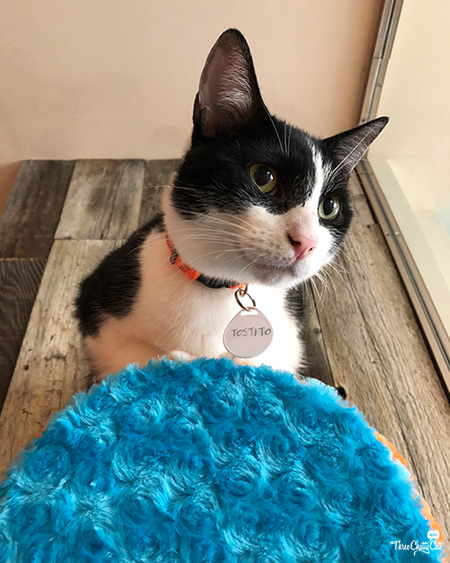 If you’re in the Southern California area, you should definitely visit Catmosphere Laguna! You can connect with the cat cafe on Facebook and Instagram.

***Photos of Gail and the cafe food items provided courtesy of Catmosphere Laguna.