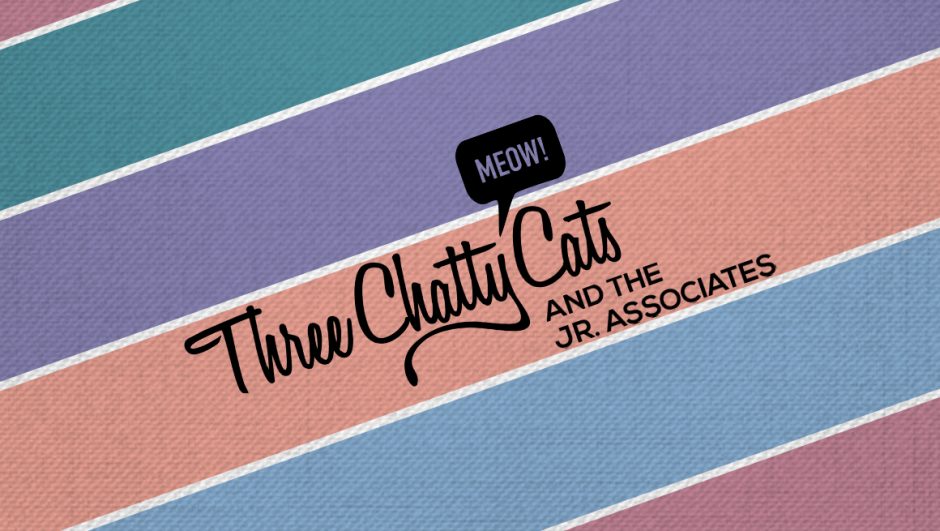 Well, it’s that time! What time is that, you ask? Time to give the ol’ blog a refresh! As readers know, I had three cats when I first started this blog – hence Three Chatty Cats.

However, we’ve since adopted two cats, so we now have five cats in the house. I decided it was finally time to give Woodrow and Harley their due on the blog.

With the recent addition of the cats’ weekly chats on the blog, I wanted something fun and whimsical for the blog header – and the old black and white version just didn’t fit anymore. While it served its purpose for a while, it only showed the three original cats, and I was also getting tired of the B&W since it didn’t really match anything else on the blog.

So, I turned to my awesome-town husband to create something new. We wanted to play on the cats’ individual personalities and keep it light and fun. Here’s what we came up with…

I’d like to introduce you to Three Chatty Cats and the Jr. Associates!

More playful, right? I thought it would be fun to introduce the new look with this little one-minute video I made. Volume up to enjoy it!

Dexter is our shyest cat by far. He’s the first to run and hide (and stay hidden for longer than necessary), but he also loves exploring anything new in the house. Just very, very slowly. Recently, he’s shown his passion for sci-fi and space adventures. At heart, Dexter is a dreamer. Just a shy one.

As any good tortie should be, Olive is the lady of the house and lets everyone know it. She’s our smallest cat, but don’t let her size fool you. She has the loudest roar in the house. You don’t mess with Olive. You just don’t do it. Olive is also quite the loner, often found lounging by herself in a sunpuddle. The only one she’ll let near her is Dexter. But at the end of the day, Olive is a sweetheart and loves belly rubs. On her terms, of course.

Sophie is a beautiful cat. But more often than not, she has a goofy look on her face. And not only that, she’s actually doing something goofy. Whether it’s getting her head stuck in a Kleenex box or getting stuck between the sliding glass door and screen door, Sophie is our resident goofball. But she’s also quite mischievous. It’s easy to blame something on Sophie because most of the time, that would be accurate. She steals straws and hair ties, stalks and pounces on Olive, and just generally seeks out trouble.

Oh, Woodrow. What can we say about Woodrow (our first foster fail)? He’s just so sweet and lovable, but he’s kind of a dum-dum. A lot of that has to do with his expression. He has a dazed look on his face much of the time. He looks lost or confused sometimes. Woodrow has the sweetest little meow that he chirps when Ross comes home from work. He loves sitting on our laps and being pet. Definitely lovable. Just a tad dim.

Harley, our second foster fail, is the oldest cat in the house. And he fills that role well. He doesn’t meow – he grumbles. Like, seriously, he grumbles. He’ll be walking down the hall grumbling to himself. He comes into the bedroom in the morning and grumbles. He uses the litter box, then grumbles. The other thing about Harley – he comes running at mealtime, pounding down the stairs (he’s not light on his feet). He whaps anyone in his way and goes to the front of the line. Harley definitely subscribes to age before beauty.

And there you have it!

A ginormous thank you to my hubby Ross for creating the new header. Not only that, thank you to Ross for being an idea generator when I’m running on empty and for always proofing posts and making suggestions. As Olive would say, you’re #fab.

65 thoughts on “Three Chatty Cats and the Jr. Associates”