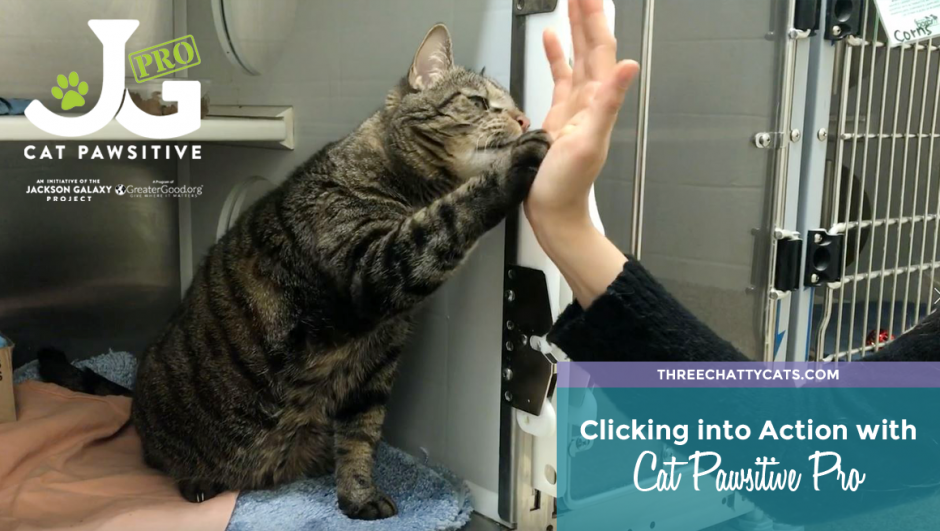 You may recall that I’ve written about Cat Pawsitive before, the clicker training initiative for shelter cats. Well, some exciting things have taken place since the 2017 program wrapped up last year. And the current 2018 Spring semester is already well underway!

What does the merger mean for the Cat Pawsitive program? Well, for starters, The Jackson Galaxy Project (JGP) was able to expand on the already established program and it has now become Cat Pawsitive Pro (CPP). That means that more shelters across the United States can participate in the clicker training program, which means more shelter cats will benefit! 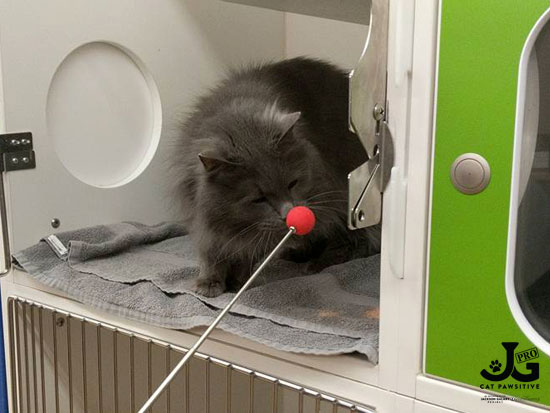 Program Manager for Cat Pawsitive, Christie Rogero says, “This year’s Cat Pawsitive Pro Spring semester has been especially exciting for me. We’ve worked hard over the past couple of years not only to teach positive reinforcement techniques to our participating shelters, but also to learn from the shelters. Because of this, each new class has an even greater pool of resources available. The cats, of course, benefit immensely from this, and we’re already seeing an amazing number of inspiring, heartwarming, happy-tears stories coming out of the Spring 2018 class.”

Regarding the merger, Christie goes on to say, “This is also the first CPP class with The Jackson Galaxy Project as a part of GreaterGood.org, and it marks the start of an exponential expansion of the program. In the coming weeks, we will be officially announcing details about this expansion, and I am overjoyed at the prospect of bringing this lifesaving program to more organizations.”

According to founder Jackson Galaxy, CPP “is about awareness, enrichment, innovation, and increased adoption placement on a grassroots level. I know that the work done during this program will have a ripple effect, helping so many cats in need and the humans who care for them.” 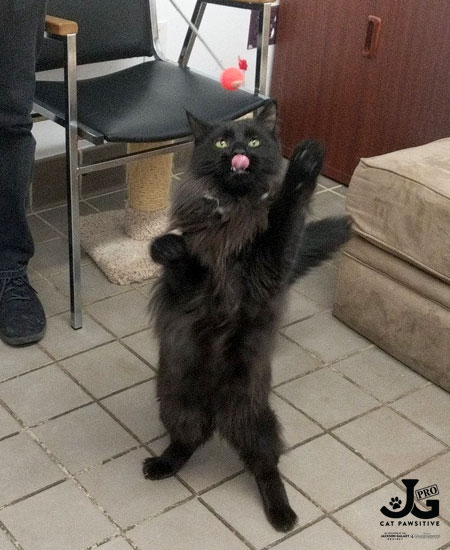 The ten participating shelters are listed below, and each shelter has staff and volunteers currently working with their cats. And what do you know – several of the CPP cats have already been adopted!

Jasper at PAWS. First some training, then some loving!

I’m happy to have returned this year as a volunteer writer for the program. Two of my three shelter articles have already been published and you can read them on the JGP website. I will also be responsible for checking in with each shelter for mid-program updates and once again after the program has completed. Stay tuned for more to come from Cat Pawsitive Pro!

You can read about all of the shelters at thejacksongalaxyproject.org – not just mine!

Want to see how last year’s program went? Check out this wonderful video created by Susan Gaskey. The inspiring video touches on initial thoughts on the program and features many staff and volunteers from the shelters. And best of all, you get to see the cats in action and see their success stories – as well as some that were adopted!

GreaterGood.org is an independent 501(c)(3) charitable organization devoted to improving the health and well-being of people, pets, and the planet. Source

The Jackson Galaxy Project, founded in 2014, is a Signature Program of GreaterGood.org, a public 501c3 nonprofit organization. The Project is the realization of Jackson’s long-standing dream of bettering the lives of animals at risk and helping the people who care for them. Source

***All photos and videos used with permission from The Jackson Galaxy Project.

What do you think about Cat Pawsitive Pro? Do you think your local shelter cats would benefit from clicker training?

36 thoughts on “Clicking into Action with Cat Pawsitive Pro”