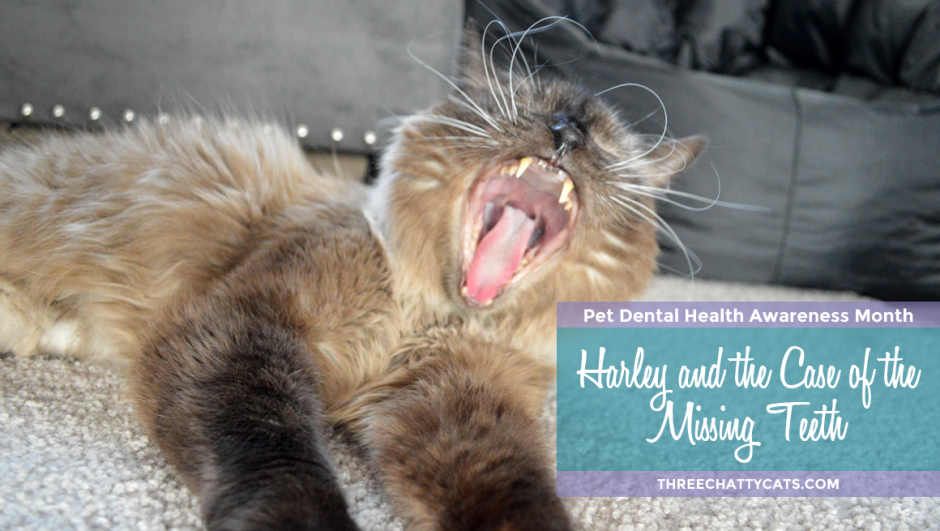 Hey Harley, you’ve officially been adopted for less than a month and guess what? 10 of your teeth have been stolen! Welcome to your new home, buddy.

That’s right, folks…poor Harley had a dental cleaning this month, which actually is very timely since February is Pet Dental Health Awareness Month.

Since Harley is an older cat – not old, but older – at nine years and some change, we thought it would be a good idea to take him to the vet once we adopted him to get his baseline with blood work and weight, etc. So in January, we did a full workup on him and everything came back glowing! Except for his teeth.

They could tell he needed some extractions and a really good cleaning. Since we’d already paid for the blood work and I didn’t want that to expire and need another set before his dental, we scheduled it quickly.

Fast forward to the big day on February 5th. I dropped him off at seven in the morning so they could do his pre-dental exam. After doing the x-rays, they determined that 10 teeth needed to come out. Ten! 10! ¡Diez!

The 10 teeth? They included all of his upper premolars and molars due to root exposure and cavities, his upper right canine which had a large amount of pocketing (a large hole between the gums and tooth), and his lower left third premolar which had a cavity of the crown. And to top it off, Harley had his lower right canine filed down a bit to prevent it from striking his upper lip. Poor guy!

Harley did well under anesthesia, and they monitored him most of the day after the procedure. I was allowed to pick him up in the afternoon. When we got home, he ran right out of his carrier and was pretty much himself. At dinnertime, I added water to his wet food and he chowed down like normal, or I guess I should say he lapped it up since it was soupier than normal. But he showed no discomfort. I withheld anything with a crunch for six days.

One week later at his checkup, the vet said he was healing up nicely. I reported that he did well at home and throughout the week. The only noticeable difference was that I saw him drool a bit. Our vet said that’s not uncommon after a dental and especially because he had (dissolvable) stitches, and that the drooling should stop over time (and it has).

Since February is Pet Dental Health Awareness Month, here are some things to look for regarding periodontal disease in cats (this month and every month, of course).

Even if you can’t tell by simply looking in your cat’s mouth, they could have damaged or infected teeth, causing them pain or discomfort. If you take your cat to the vet regularly, your vet should be able to identify signs of periodontal disease. Your vet will examine your cat’s mouth and overall oral health at each routine vet visit. They will also advise if your cat needs a dental cleaning.

Some cats will require more frequent dental cleanings than other cats. But to help keep your cat’s mouth in tip-top shape, you can ask your vet about dental treats, oral rinses and dental wipes. You can also ask them to show you how to properly brush your cat’s teeth at home if your cat will allow it. Harley says he prefers dental treats. Always treats.

Disclaimer: I am not a veterinarian, nor do I have any medical background. If you think your cat has signs of periodontal disease or needs a dental cleaning, you should consult your veterinarian. 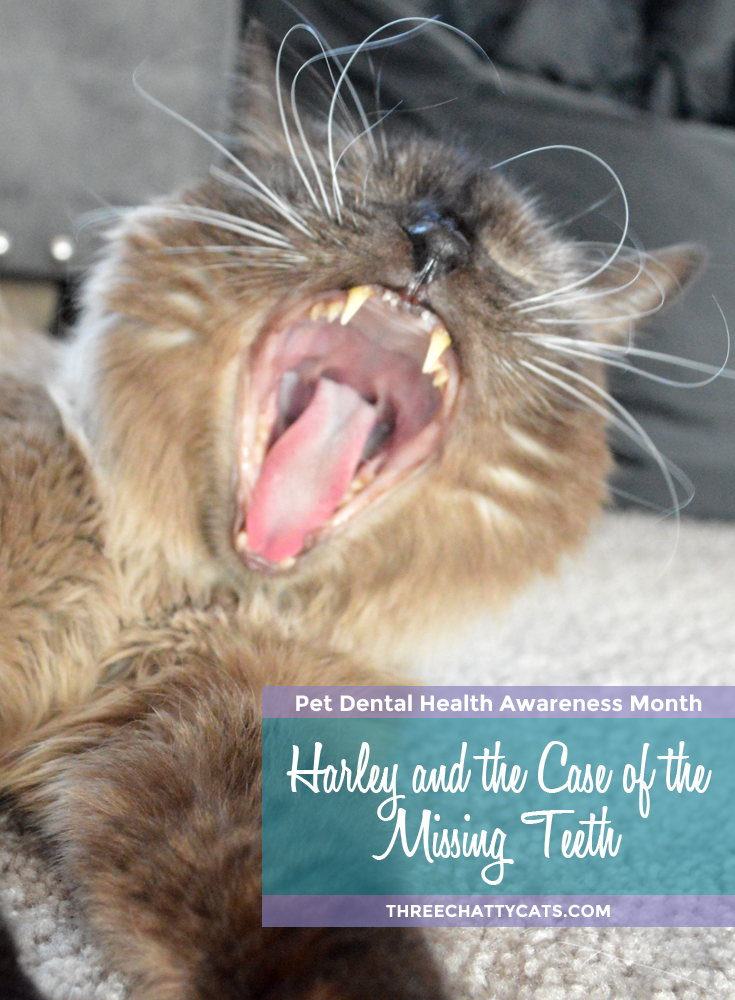 Has your cat ever needed a dental cleaning?

49 thoughts on “Harley and the Case of the Missing Teeth”