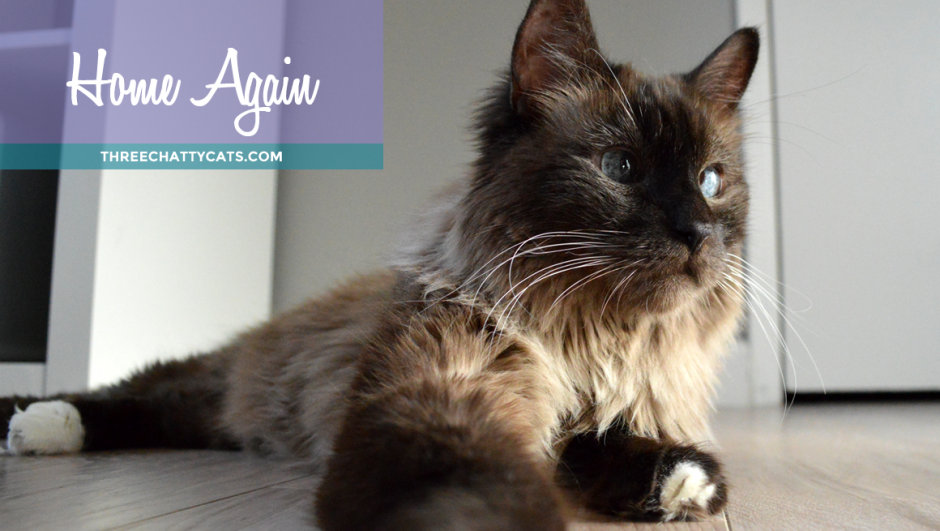 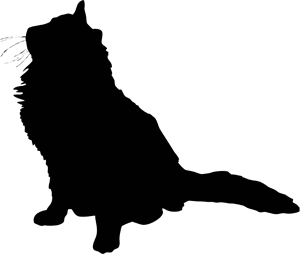 Hi, it’s me, Harley. I’m happy to tell you that I’m finally home. It’s a different home…but it is a home. I know you’ve been worrying about me this past year. I’ve been worried, too. But I found a nice home to live in and I like the new humans very much.

It was a bit dicey there for a while, wasn’t it? Can you believe that I was adopted twice last year and returned both times? Living in those temporary homes was nothing like living with you and Pa. You two were the bestest that I could’ve ever asked for. I only wish we’d had more time together…eight years just wasn’t enough. After Pa died, I didn’t think I could be any sadder. But you warned me, Mama. You said you were getting up there in age and you might have to go keep Pa company. I really thought we’d be together forever. But sometimes forever doesn’t last.

Did you know that I stayed by your side after you left? I tried to keep you warm for as long as I could. That big guy from animal control had to tear me away from you. His hands were just too strong for me. I cried and screamed for him to put me back with you, but he just wouldn’t listen. I’ve come to learn that a lot of humans don’t listen very well.

The shelter was a scary place, terrifying really. I was confused; I didn’t have any of my toys or blankets. It smelled awful…and worst of all, you weren’t there. 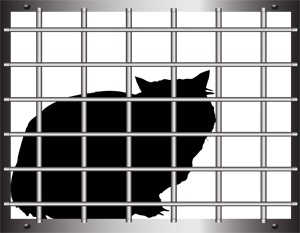 There were so many dogs barking and cats crying. Everyone was pretty much saying the same thing. “Get me outta here!” I stayed hunched up in the back of my cage, missing you and Pa like crazy.

After a few weeks, someone came and took me to a new place. I got scared again because I didn’t know where I was going. When I finally peeked my eyes open, I found myself in another kennel. But this place was much calmer, and I ended up in a room full of other cats in their own kennels, too. They weren’t crying like at that other loud place. And I could only hear a bark or two when the big door to the room opened.

But even in this quieter place, I struggled because I missed you and Pa so much. I got pretty sick, Mama, and the doctors poked and prodded me. I just wanted to give up. I even stopped eating. But the good people at the shelter nursed me back to health so I could find a new forever home. 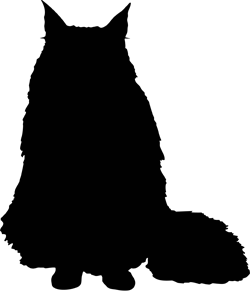 Mama, I’m not going to dwell too long on what happened next. It wasn’t a very fun time for me. I thought I was going to a new forever home – twice – but both times I got returned to the shelter. I don’t know what happened or why they didn’t want me. But they didn’t…and I went back to that shelter with the nice doctors and friendly caregivers. It made me pretty sad to go back, and I still wasn’t doing well.

Eight months after first arriving at that nicer shelter and bouncing back and forth between supposed forever homes, something happened. One of the nice ladies there introduced me to two humans who seemed okay enough. She asked me if I wanted to go into foster care with them. I didn’t know what that meant, so I got scared again and made a mess in my carrier.

It was a long car ride to the foster home and I hid as soon as they let me out of the carrier. But little by little, I came to realize that these new humans were pretty nice. They gave me a whole, big room to myself! It was quiet and warm. I had all I could ever need in that room – food, litter, sunpuddles, beds, blankets, toys…well, except for you and Pa of course. You both were still gone.

After a few days in this new home, I decided to put on my big cat pants and venture outside of the room. And boy, what an experience! There were other cats in this house! Four to be exact. A big, goofy guy named Woodrow. A timid fella named Dexter. A spunky gal named Sophie. And one I have yet to figure out named Olive (she’s so mysterious, Mama!). They were all kind of cautious around me, and we mostly just ignored each other.

And guess what, Mama! They also have a doggie in the house! He kinda startled me at first and I gave him a good whappy paw. You better believe that he leaves me alone now.

But the bestest day, the very bestest day in the house was the day they put up the big green tree! Just like you and Pa used to do every year! I recognized it immediately and made it known that I owned the space under the tree. No one else was allowed. Except for all the presents of course. Only me and the presents were allowed under the tree.

Time went on and I really grew to like these new humans. And Woodrow and I became friends. I would chase him around in the mornings while we waited for the lady human to wake up and feed us. I really started to enjoy myself.

But I still wasn’t sure what this “foster” thing was all about. Was I here to stay or not? Should I get comfy with these humans or were they going to return me like the other ones did?

Guess what, Mama? The other day the lady human was talking on the phone and I heard her say, “foster fail.” Do you know what that means? I’m here to stay! She sat me down and told me they were adopting me! I would never have to see that shelter again! She promised me. We shook on it.

I was so happy that I ran zoomies up and down the hallway. Woodrow joined me. He told me he was a foster fail, too. I guess these humans don’t know that it’s actually a foster win.

You’ll be happy to know that my name is still Harley. I’ve kept it with me through this whole journey. I know that some kitties get new names when they get new homes. But I am Harley and no one will ever call me different. The cat guy here wanted to call me Harvey. Can you believe it? I looked him straight in the eyes (which is hard for me to do with my crossed-eyes), and I said, “My name is Harley! My Mama named me after some motorcycle she’d found me hiding under as a kitten!” The cat guy nodded and there’s been no more talk of changing my name. We fist-bumped on it.

So, here I am in a new home. I still miss you and Pa dearly. I would’ve loved to spend my whole life with you, Mama (all nine of ‘em!). But I know I’ll be just fine here, so you don’t need to worry about me anymore. I’m not worried. In fact, I’m quite happy here.

I still miss you every day, Mama, and I’ll never forget you. But the pain is a little less now that I have a new place to call home. It’s the forever kind, I just know it. And, if you’ll let me, I’d like to call this new lady “Mama” as well. I think she’d really like that. And maybe one day, I’ll climb into her lap. But I’m not ready for that just yet…I still miss yours a little too much.

Goodbye for now. Please keep your lap ready for me when we meet again. But until then, I will be just fine here…because I’m home again. 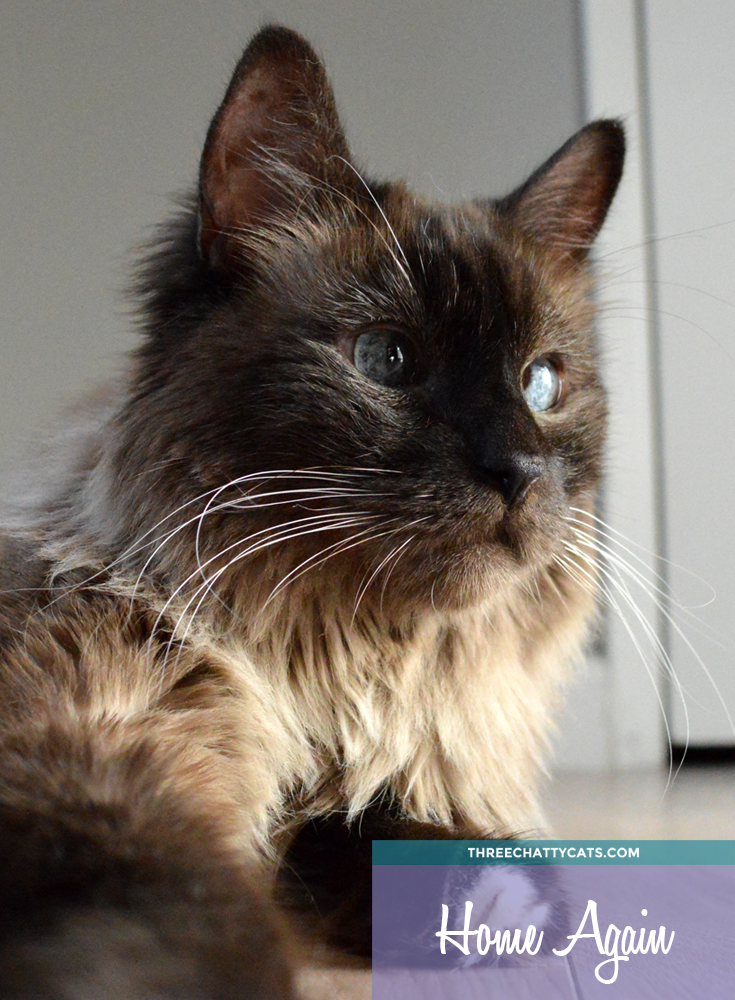 As you may have guessed, Ross and I have adopted Harley. With all my cats, and as I’m sure many of you have done as well, you wonder about the life they had before finding their way to you. So, I imagined that Harley had a loving home with an older lady who passed away. And often when that happens, the beloved pet ends up in a shelter. The middle part of the story – getting sick, not eating, being adopted and returned twice last year – is unfortunately a true part of Harley’s journey to us. But now he is home. And he is here to stay.