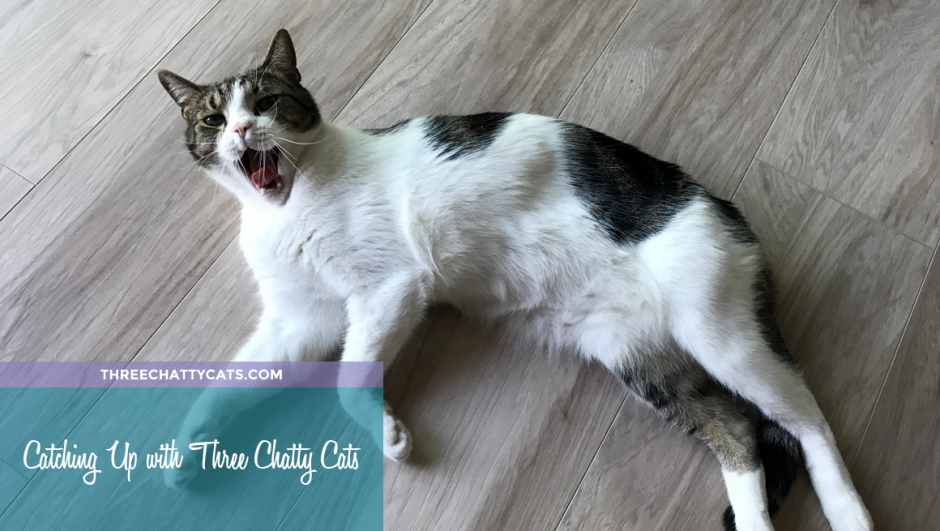 Dexter, Olive, Sophie and I are over the moon. We learned yesterday that Three Chatty Cats won Best Cause Blog at the BlogPaws Nose-to-Nose Awards in Myrtle Beach, South Carolina.

Blogging is a hobby for me – I do it because I enjoy it. And when I first started Three Chatty Cats in January 2016, I had no idea what I was doing. I sort of fell into the rescue niche with one post I’d done…and as they say, the rest is history. Since that first post, I’ve profiled rescue groups, individual rescuers, foster parents, and even shelter photographers. Anyone who does their part to help cats deserves recognition.

And now to be honored as Best Cause Blog for doing something I love…well, that feels wonderful.

What We’ve Been Up To Lately

I’ve been a bit quiet on the blogging scene this month. I’m in the middle of a month-long construction project at the house. The cats have been restricted to our upstairs for the past month. And while contractors are in the house working (which is basically every day lately), the cats are locked up in my home office. I’m paranoid that they will get out, and I was even worried for about two hours one day that Dexter had escaped outside! Turns out he was inside the upholstery of one of our chairs. Gah!

So anyway, I’ve been distracted, not posting or visiting much lately. But as the project finally comes to an end later this week, I hope to change that.

Needless to say, I wasn’t at BlogPaws last night. Instead, I was sitting in 95-degree weather (no air conditioning because of the construction project!), tuning into the live stream to watch the event. And Best Cause Blog was up first!

BlogPaws recommended having someone available to accept your award if you couldn’t make it. I immediately thought of my first blogging buddy, someone I’d met on social media even before I’d started Three Chatty Cats. Yas behind Chirpy Cats (a Nose-to-Nose nominee this year for two categories as well!) said she’d be willing to accept the award if I won. And she did an awesome job – perhaps the most exciting part being that she said my last name right! Loehner = lerner, not loner. :-) Thank you, Yas!

Here’s a video of the awards ceremony. Best Cause Blog starts at about 27:20.

The flood of emotions that went through me upon hearing Three Chatty Cats called was overwhelming. I immediately texted Ross (who works at a university and was at commencement ceremonies), and then I informed the cats. I’m pretty sure they were happy about that, as they had a group meeting later in the evening to chat about it. 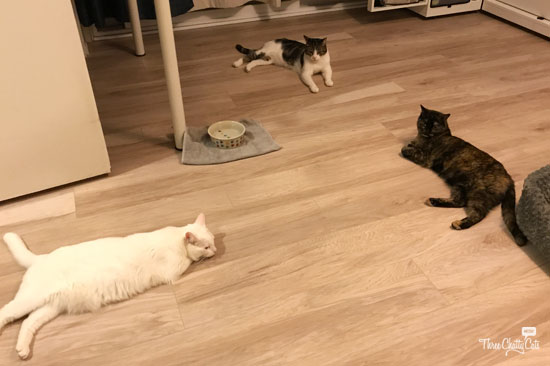 Dexter, Olive, Sophie and I would like to say a big thank you to all of our readers and for all of the support from fellow bloggers. We’re excited to continue on our blogging journey with you!

And congrats to all of the Nose-to-Nose nominees and winners!

Did you see that Dexter, Olive and Sophie were interviewed over at Adventures in Cheeseland? Check out what the Three Chatty Cats had to say about each other! Thank you to Snoops and Kommando Kitty for the interview.

33 thoughts on “Catching Up with Three Chatty Cats”