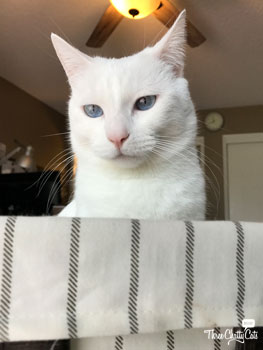 Sophie here – coming at you from my interview basket! You know that when I take over the blog there’s something extra special in store for readers. And today, that something special is an interview conducted by the totally pawesome me with the totally swoon-worthy Bodie Jones from Pittsburgh, Pennsylvania.

The Mama told me about this rescue cat named Bodie Jones that she came across on Instagram. She and Bodie’s mom, Christy, bonded over…what else…cats. The more the Mama talked about the seven-year-old Bodie, I thought it would be fun to interview him. So, that’s what I did! 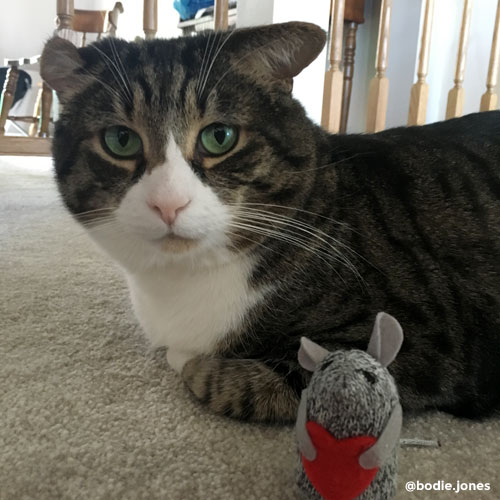 Sophie: Hi there, Bodie. I hear your full name is Bodie Jones. Can I call you Bode-man?

Bodie: No. Only my mom can call me that.

Sophie: What about Bo-

Bodie: How about just Bodie.

Sophie: Okay. Just Bodie it is! Where were you adopted from?

Bodie: From a place called Animal Friends in Pittsburgh.

Sophie: Hey, Bodie’s mom. How did Bodie end up at that shelter?

Christy: Hi, Sophie! Well, during the shelter’s annual New Year’s Eve rescue event, Bodie was brought in by the dog warden – a rare occasion, as the dog warden usually only handles, well, dogs! He had found Bodie roaming the property of a farm house when he journeyed to pick up a stray dog. Someway, somehow, he ended up with both the dog and Bodie!

Once Bodie arrived at Animal Friends, it was clear that he was a street cat. His ears – already very damaged from either frostbite or bad infections – were full of mites, his fur full of fleas, and his belly full of worms. He was quickly swept away by the medical staff to be treated, neutered, and microchipped.

“I saw a photo of Bodie on the Animal Friends Facebook page and was instantly smitten.” ~Christy 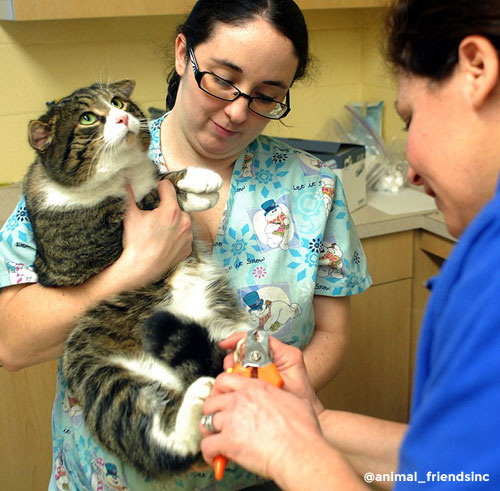 Bodie: I’m not so smitten that my mom is sharing that picture right now.

Sophie: I see you were getting a pedicure.

Bodie: If that’s what you call it.

Sophie: Christy, how did you come to adopt Bodie?

Christy: At the time, I had been working at Animal Friends for two years and had managed to make it that long without adopting each animal I fell in love with. Trust me…there were many of them. But something was different about Bodie.

While he recovered and prepared for his spot on the adoption floor, I would find myself huddled in the back kennel, searching for treats and toys to bring to him. I decided to foster him. This actually makes me laugh now – I absolutely knew I was going to adopt him, but I wanted to be sure it was the right fit.

Sophie: And was it?

Christy: Yes! He felt right at home. Here he is moments after he climbed out of his carrier.

At first, it took Bodie time to get adjusted. It was clear he had been inside a house before, but he had never seen or been on a bed or a couch, was terrified of the toilet, and thought I left him behind whenever I closed the shower curtain to bathe. I slowly let him adapt to his surroundings, and it wasn’t long before he was fully settled and cozy in his home.

On February 26, 2013, Bodie was officially adopted and we’ve been inseparable ever since.

Bodie: Can we get back to me now?

Sophie: Sure thing, Bodester. I mean, Just Bodie. Your mom has described you as brawny, hilarious, loyal and charming. Do you agree with this assessment?

Bodie: Brawny? Well, I am 17 pounds of pure muscle. I’m an indoor cat, but one time I couldn’t help myself and I ran right through the screen door to catch a chipmunk. I’d say that’s pretty brawny-like, wouldn’t you? And oh, don’t worry, the chipmunk survived. I was just saying hi.

Bodie: As for loyal, I love my mom so much. I follow her everywhere. I wait for her by the door when she comes home from work every day. I actually like to greet all visitors at the door with a chirp – and rub up against them to say hello.

Sophie: You’re so brave. I usually run and hide when someone comes to the door.

Bodie: Tsk tsk. Visitors are friends, little one. I’ll climb up onto a lap, even if I’ve just met the person. I like to put my paw on their face, mostly so they know I’m there. You know…I must remain the center of attention at all times. 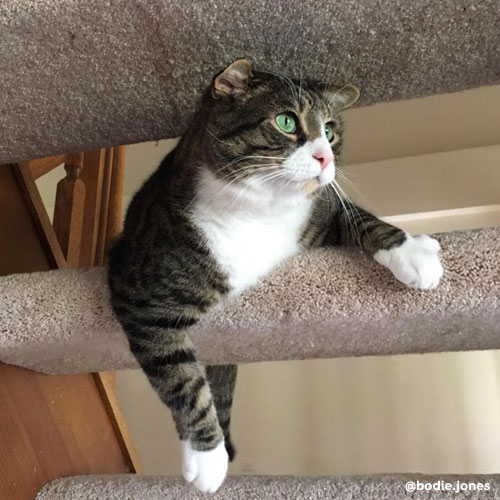 Sophie: Bodie, you sound like one of a kind. I bet your mom is so happy that you chose her.

Bodie: She is, Sophie, she is.

Sophie: Hey mom Christy, what’s a fun fact about yourself?

Christy: I am a die-hard Harry Potter fan! Next month, I’ll be traveling back to London for a second Harry Potter trip. This time, friends and I will be seeing the new play, The Cursed Child, and also exploring some unseen areas and shops, like the House of MinaLima.

Sophie: My mom is also a Harry Potter fan! And me, too!

Bodie: I’m not because it takes my mom away from me. Last time she went to London, I feigned like I was dying because she was gone too long. She left me with a sitter (who I admit…I do like). But I missed my mom so much! I started gagging after three days of her being gone. I really hammed it up and Lauren, the sitter, rushed me to the emergency vet. I heard my mom was panicked overseas and started looking for flights home. I felt bad about that, so I eased up. Turns out I just had a bit of kitty gas.

Sophie: MOL! I know what that’s like. Thanks for taking the time to talk with me today, Bodie. I hope you enjoyed our chat! And readers, be sure to follow @bodie.jones on Instagram. Bodie was lucky enough to have a professional photo shoot and you won’t want to miss those pictures – his mom Christy will be sharing them soon!

Isn’t Bodie Jones a fine specimen of a mancat? 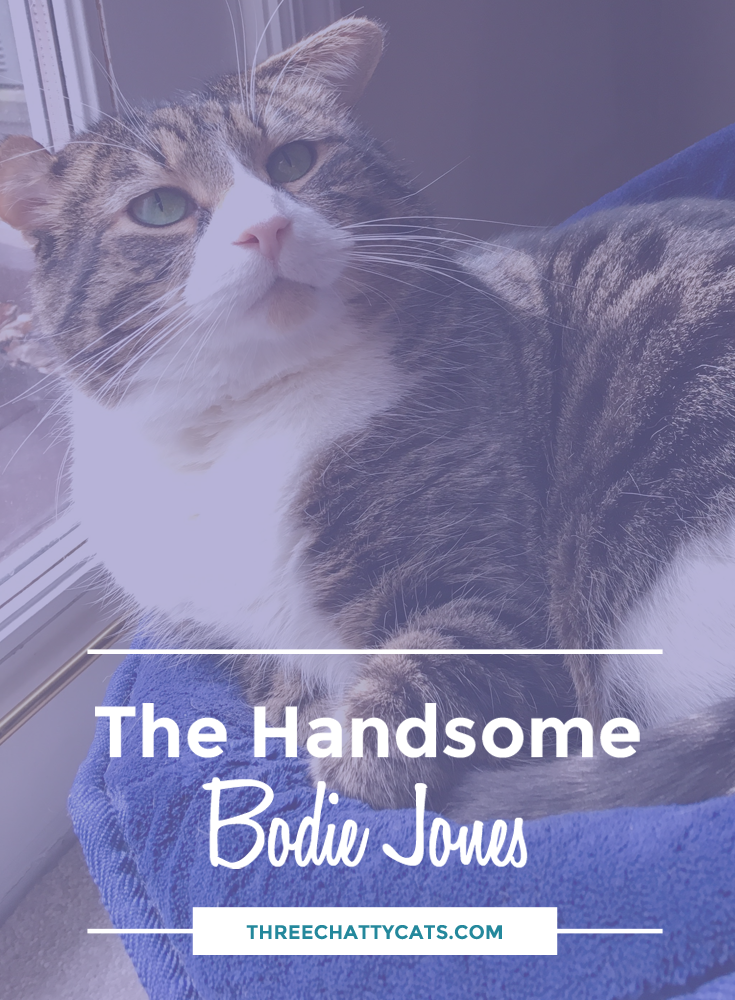 29 thoughts on “The Handsome Bodie Jones”