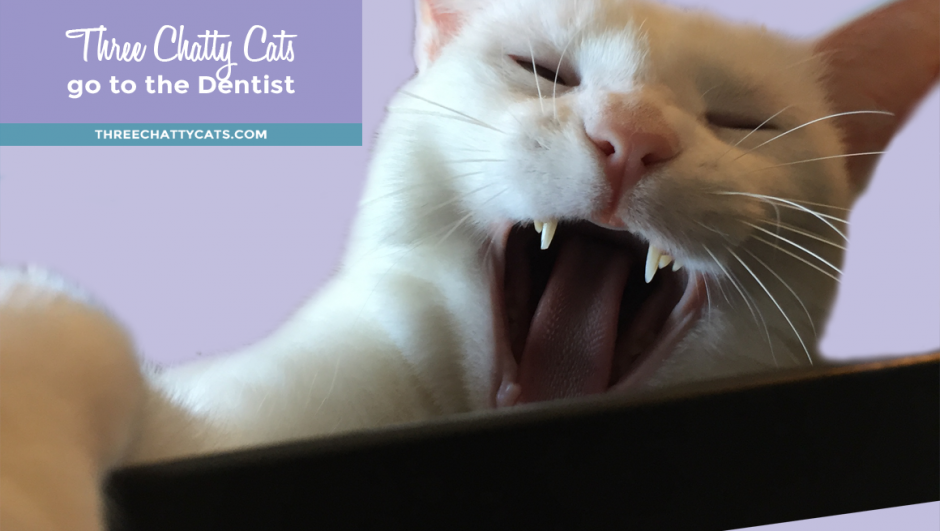 Oh, February. You’re a short month, but you offer up so much. Like Groundhog Day. Valentine’s Day. And President’s Day. And sometimes you give us an extra day – that elusive February 29th – for which we say thank you. But you also provide us with Pet Dental Health Awareness Month! 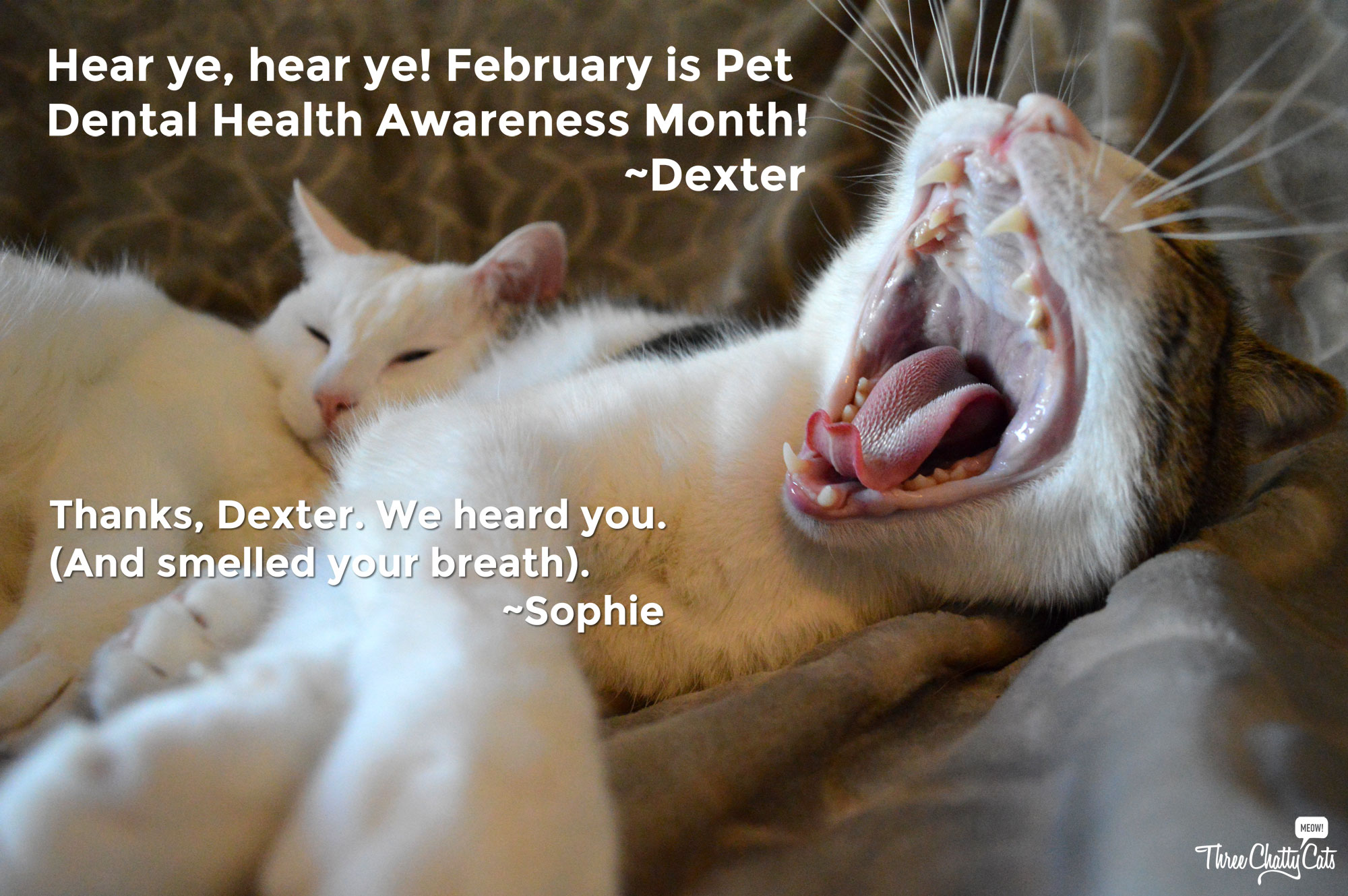 So, as we close out another February, I figured I should hop to and tell you about our recent dental experience with the cats. And stay tuned at the end of the post for a giveaway, thanks to Chewy.com.

Being a cat mom for about six years now, I don’t often get a lot of “firsts” anymore. But I did have one recently. It was the first time I took all three of my cats in (at one time, mind you) for complete dental cleanings.

Surprisingly, up until that point, we’d never been told to do it. But during a routine exam, they recommended it for Olive. And Sophie, well, she had developed some really bad breath. And just to cover our bases and since he’s the oldest of the three, we dragged Dexter along, too. Lucky boy.

The vet requested that we drop off the kitties early so they’d have enough prep time. We arrived at their office around seven in the morning, and in we walked with three cats harmonizing quite nicely to the song of their people. Heads turned, smiles were given, and understanding nods from fellow cat owners were exchanged.

The lady at the front desk gave us the rundown on the potential costs. After Ross, my hubby, and I started breathing again, we signed on the dotted line our agreement to pay. We then bade farewell to our miserable trio and headed home.

The call came in the early afternoon. All three cats did well and were coming out of sedation. Dexter had tartar buildup on his upper right and left fourth premolars. He also had mild inflammation along the gumline of his upper left canine. But overall, no extractions were needed for Dexter. Yay!

There’s nothing of import to note for Miss Sophie (besides the fact that the entire vet staff loves her). Sophie does have a tip fracture on her upper right canine. But she’s had it since we found her and it’s not causing an issue at this time. You can see the tipped tooth in the Periodontal Disease in Cats graphic below (click to enlarge). 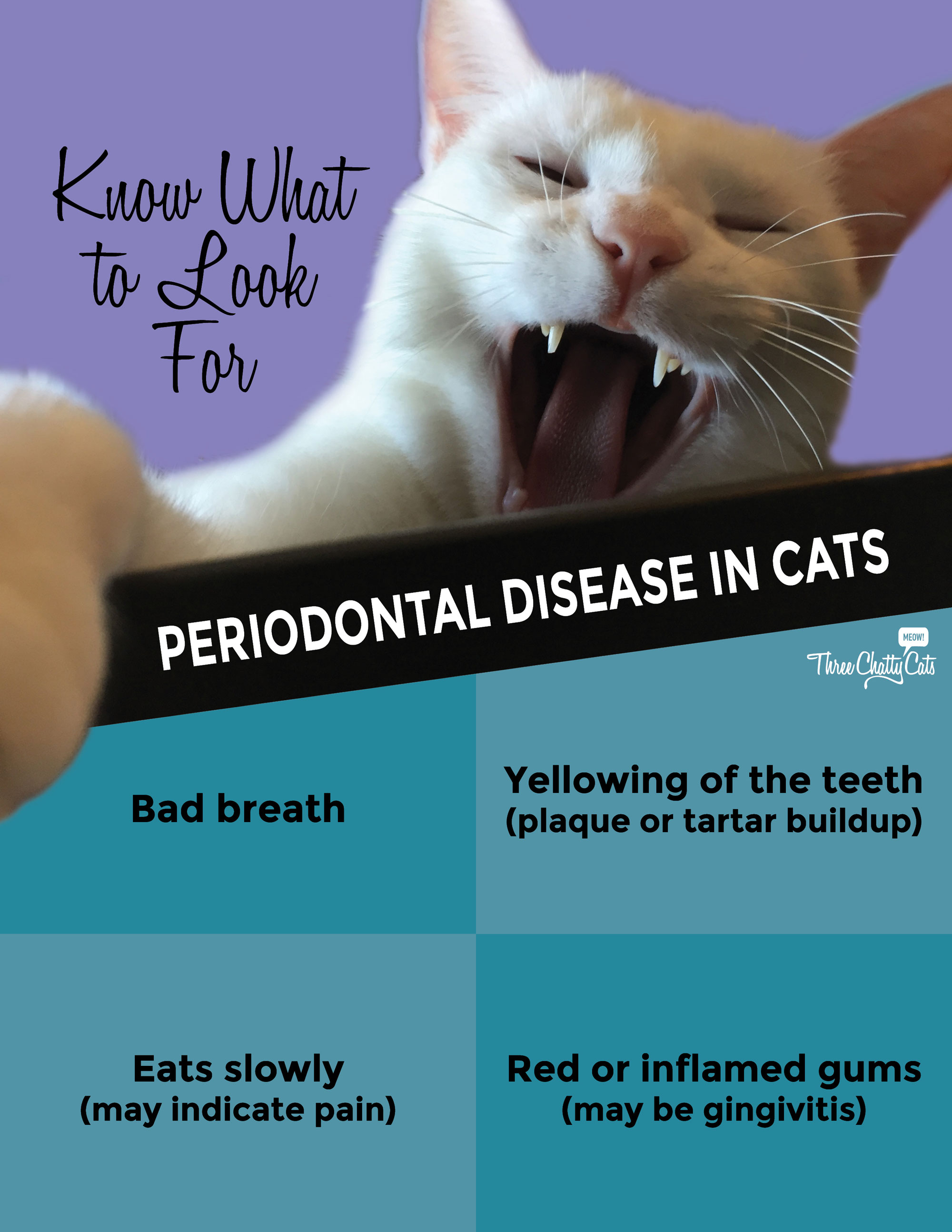 And then there’s Olive. Oh my, poor Olive. Before we brought her in, we’d been warned that she may need some extractions. Turns out Olive needed five extractions, including her two upper canines. (No more fangy grins for Miss Olive.) She also had both of her lower third premolars and her upper left second premolar extracted. So all in all, five teeth extracted! Olive clearly has periodontal disease. Before and after extraction shots are below. But I’m happy to report that Olive recovered just fine from her surgery and could care less about her missing teeth.

When we were finally able to rescue our kitties from the vet’s office later that afternoon, we were sent home with sample dental treats and also told about oral rinses and dental wipes. I’d heard of rinses before, but not wipes. And obviously, they recommend that we brush their teeth – daily! Or, at least 1-2 times a week. I’m sorry, but have they met our cats? We went the dental treat route for now and will also be looking at oral rinses.

I was happy to see that one of the February offerings to try out this month for Chewy.com was Greenies Feline Dental Cat Treats. Since Olive was in most need of these, I let her pick the flavor. Naturally, she went with catnip flavor.

According to the Chewy.com website description, Greenies Feline Dental Cat Treats “have a unique shape and crunchy texture that’s proven to reduce tartar.” That sounds good to me! 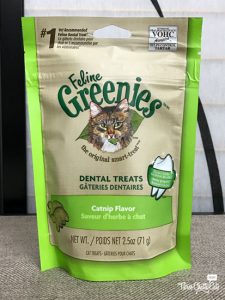 Olive gobbled up these treats. Even with her few missing teeth, she did just fine. And over time, I hope they help her with future dental issues.

You can currently purchase a 5.5 oz bag of Greenies Feline Dental Cat Treats from Chewy.com for $3.89. The treats are available in a variety of flavors. Remember, Chewy.com offers free shipping on orders over $49.00.

And now, why not enter our giveaway to let your cat try out these dental cat treats! One lucky reader will win one package of Greenies Feline Dental Cat Treats, thanks to Chewy.com. Enter a blog comment below and then enter the giveaway.

What steps do you take to ensure dental health for your cats? 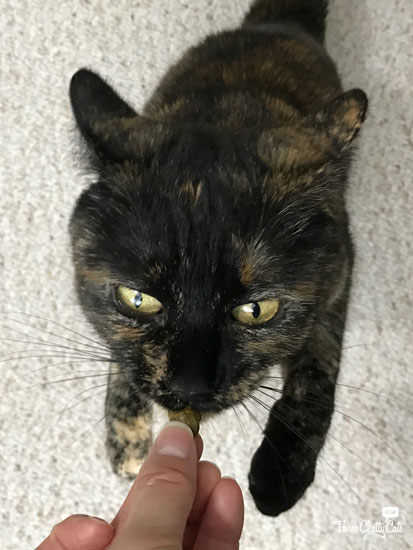 37 thoughts on “Three Chatty Cats go to the Dentist”