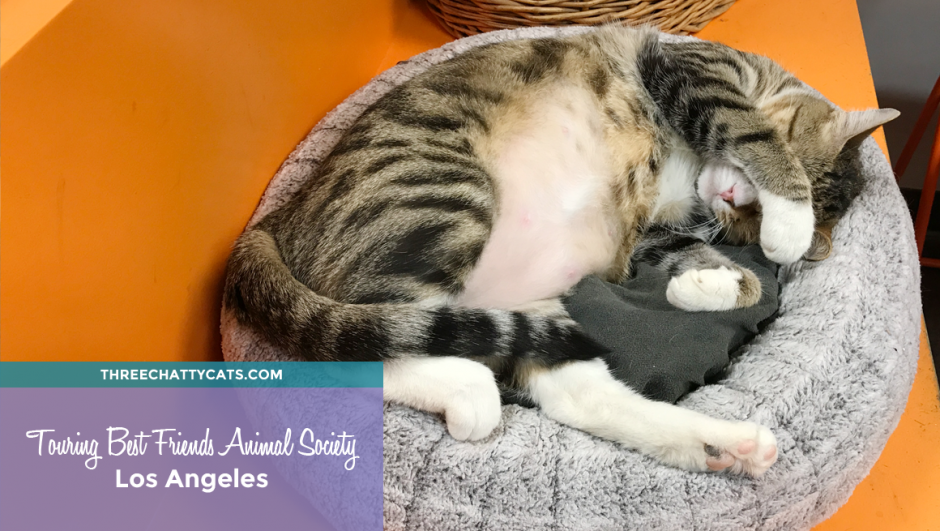 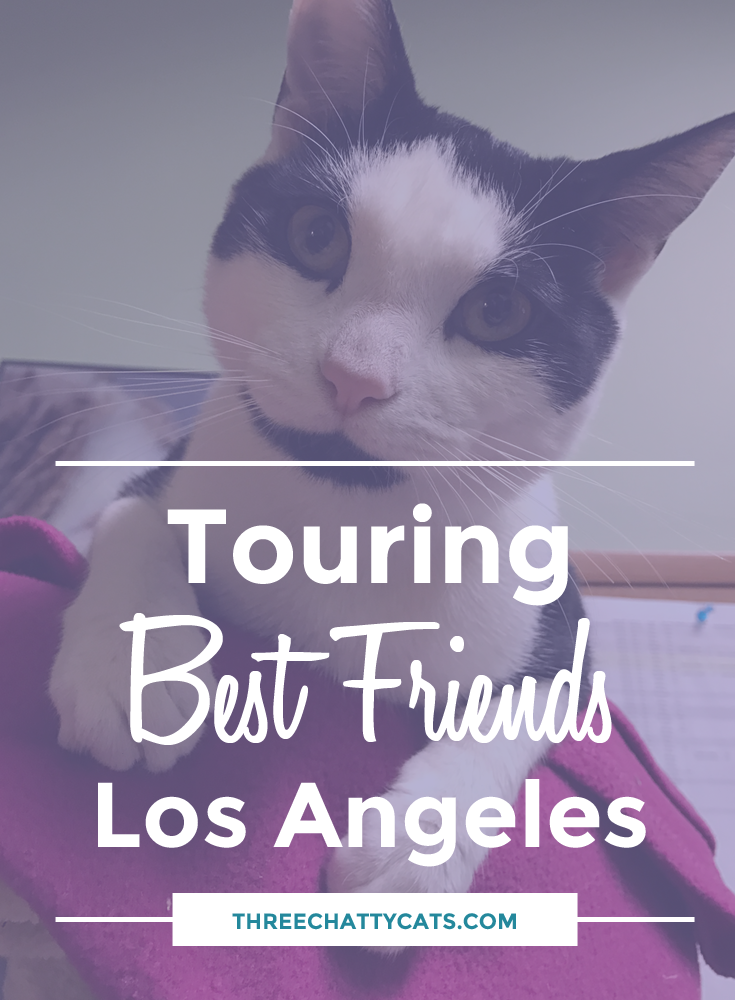 Best Friends in Los Angeles can house up to 700 cats at a time – and that’s not counting the many cats and kittens in foster care, too. 76 staff members take care of the cats and dogs at the facility. And since opening their doors, they have trained 5,245 volunteers at their adoption center!

Upon arriving at the Los Angeles location in Mission Hills, California, the facility appeared smaller than I expected. But boy was I wrong! Apparently, only one small area is visible from the visitor parking lot.

As you make your way inside the Pet Adoption and Spay/Neuter Center, you’re greeted with signs of those already adopted (saved!). This particular weekend that we visited, Best Friends had a $14 pet adoption promotion in honor of Valentine’s Day. We arrived right when they opened, and there were already people lined up at the door. The previous day (Saturday), there had been 23 cats adopted from the shelter!

Because of the high amount of adoptions from the day before, many of the rooms were low on cats, as new ones hadn’t been pulled from the other Los Angeles shelters yet. Ross, my hubby, joined me on the tour. First, we saw some kitties who prefer to be alone or need temporary isolation (perhaps recovering from an ailment). You can see those cats behind the front window in the lobby.

Meeting Some of the Cats

The tabby pictured below is Wynona, a four-year-old beauty, and she can currently be found in the Angels of the City section of the Best Friends LA website. She has no tail, as you can see in the picture on the left.

“Wynona is sweetness personified! This gentle girl will rub up on you for affection and loves to snuggle. She adores people and other cats, too.  Wynona is looking for an extra special, patient adopter as she is incontinent due to an unknown trauma. Wynona does her best to use the litter box, but sometimes just can’t quite make it. There are cat diapers that can help keep her (and your house) clean. If you can open your heart and your home to Wynona, she’ll repay you with a lifetime of unconditional love!” (From profile on site)

Samantha reported that Wynona has come a long way during her time at Best Friends and is at about 80% with the litter box, but she still has the occasional accident. Look how adorable she is! Wynona meowed at us and asked for pets the whole time we were in her cat room. She is just waiting on a very special adopter who is willing to work with her – and I know the perfect adopter is out there. Wynona really is a sweetheart!

Next up, this black and white little lady named Lydia rolled over and asked for loving when we visited her in the kitchen, where they have two walls of condos. The cats are allowed to roam if they want to. And this little one, who is full grown but quite small, was stuck to my husband like glue. 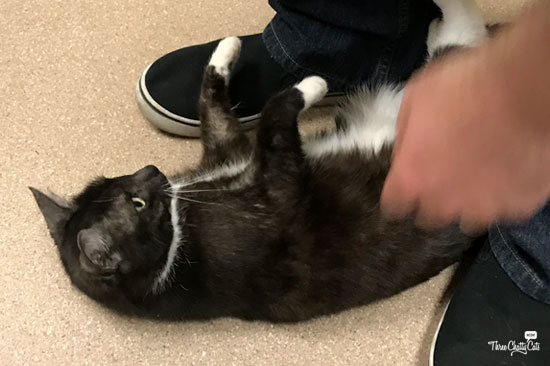 This gentleman below is three-year-old Mocca, who also lives in the kitchen. He was just chilling in his condo watching everyone. As soon as I went up to him, he became very vocal and demanded head scritches (which of course I happily provided).

And finally, here is Mr. Kitty. As you can see, Mr. Kitty is a large feline specimen, weighing in at 20lbs – all muscle, of course! We only saw Mr. Kitty through his office window, as he was intent on escaping through the door at that moment.

In 2016, Best Friends had 2,620 kittens pass through their nursery, which operates 24/7 during kitten season. Staff and volunteers bottle-feed the kittens, clean the cages and prepare food around the clock. The 2017 goal is to house, care for and adopt out 3,000 kittens through the nursery, which will help meet the NKLA initiative goal by the end of 2017, making LA a no-kill city. (More on this below.)

As we walked through the kitten nursery during our tour, we saw one nursing mom and her five kittens, who were only one day old (squee!). This is Kristen with her babies Kyle, Kent, Kora, Kyla and Kelly – born February 11, 2017. The family had the entire kitten nursey to themselves!

Typically, there are not many kittens in the nursery from December to March, as it is not peak kitten season, and the few kittens they have can go straight to foster homes.

During this slower kitten period and since they have more space available, Best Friends can take in more ringworm cases from LA city shelters, where ringworm is a problem. During our tour over the weekend, there were about 50 cats with ringworm, who currently live in three ringworm-specific areas at the facility. Some ringworm kittens are with fosters as well.

Another area that we toured at Best Friends in Los Angeles was their Working Cats section. Before visiting, I had no idea that this program existed.

The working cats structure houses up to 40 cats (and they’re usually always at capacity) that have been deemed feral, or unbonded to humans, at LA city shelters. Best Friends steps in, pulls the feral cats, and houses them until they can be adopted out to enclosed spaces as working cats, which some people refer to as barn cats.

The working cats who are friendly – and aren’t actually feral – are brought inside to the adoption center as space allows and given time to be comfortable with people. Although they may remain a bit shy, ones who are obviously not feral can be adopted out through the normal adoption process.

I wanted to quickly share with you about NKLA, an initiative that launched in 2012.

“NKLA (No-Kill Los Angeles) is an initiative led by Best Friends Animal Society, bringing together passionate individuals, city shelters and an entire coalition of animal welfare organizations to end the killing of homeless pets in L.A. city shelters by the year 2017.”

In 2015, the NKLA Coalition helped 27,100 dogs and cats find homes. Also, over 14,000 spay/neuter surgeries were performed that year in Los Angeles with support from Best Friends. You can learn more at NKLA.org.

In addition to the Adoption Center and Spay/Neuter Clinic in Mission Hills (where I toured), there is also an NKLA Pet Adoption Center located in West Los Angeles, where there are over 100 kittens, puppies, cats and dogs ready to meet their adopters!

After the tour, you know I had to browse the gift shop and snag some Best Friends items. I also purchased two items to give away to one lucky reader! I’m giving away a travel mug and a pair of socks. This is not a sponsored giveaway and Best Friends is not responsible for fulfilling the giveaway.
a Rafflecopter giveaway

The giveaway is open to U.S. residents, 18+ years of age, except where prohibited by law. If you live outside of the U.S. and would like to enter, and should you win, you can choose to send your item to a friend or rescue/shelter in the United States. One winner will be selected randomly by Rafflecopter and contacted via email. The winner will have 48 hours to claim their prize. Failure to do so will result in forfeiture of the prize, and a new winner will be randomly selected by Rafflecopter. The giveaway closes on Monday, February 20, 2017 at noon Pacific.

Be sure to check back later this month, as I’ll be sharing with you more about Samantha, our gracious “tour guide” and the Cat Behavior & Enrichment Lead for Best Friends Animal Society in Los Angeles.