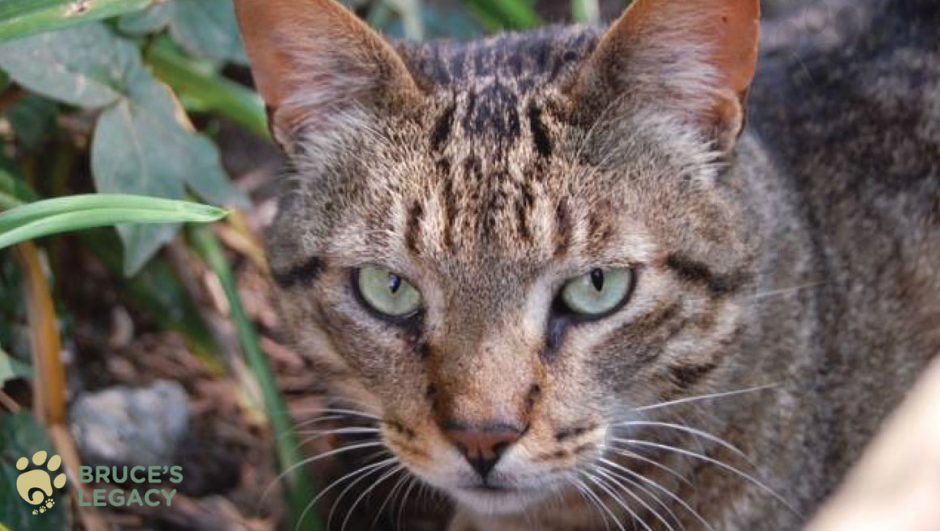 Cat rescues and sanctuaries each have their unique way of getting started. Today, we learn about a small cat rescue in Jefferson Parish, Louisiana, fittingly named Bruce’s Legacy.

Rose Goodwine, founder and president, started the rescue in 2014 with the mission to place rescued cats and kittens into loving, permanent homes. The 501(c)3 group also wants to prevent pet overpopulation through spaying and neutering, and to educate the public about responsible pet ownership.

How Bruce’s Legacy Came to Be

In 2005, shortly after my husband and I returned home from our Hurricane Katrina evacuation, two feral cats who had somehow survived the storm appeared on our back porch looking for food. We started to feed them and named them, although we were unable to make personal contact for quite some time. We named the brown and black tabby Bruce, and we named the orange tabby Rocky, mainly because he often showed up beaten and bruised. We also noticed that Bruce seemed to watch over and take care of Rocky, despite the obvious beatings he took from time to time.

Although it took about two years, we were able to start to pet Bruce as we laid out his food. We finally decided that we would like to bring Bruce into our home, but wanted to make sure he was healthy because we had two other indoor cats at the time. We also kept trying to make personal contact with Rocky.

In early 2008, we found out that Bruce was double positive, having Feline Aids and Feline Leukemia. Our vet told us that Bruce deserved a good home, but he couldn’t be placed with healthy cats due to his condition. In fact, she insisted that we find him a home, even if they had to provide Bruce with temporary accommodations as we began our search.

After sending out approximately thirty emails to cat sanctuaries across the country, one (and only one!!) sent us a response. The sanctuary was Froggie’s Pond in Battle Creek, Michigan run by Dr. Ben and Sara Huelsbergen. They read our email and told us they were willing to take Bruce and give him a home, even though they usually only took in sick kittens and cats from their area.

In April 2008, my husband PJ boarded a plane with Bruce and off they went. After an emotional roller coaster ride lasting more than three months, Bruce was getting his forever home to live out the rest of his days.

During the next two years, we kept in touch with Ben and Sara and even traveled to visit Bruce. On November 13, 2010, Bruce unfortunately passed away. For the two and a half years he lived at Froggie’s Pond, he was greatly loved. We couldn’t have dreamed of a better place for Bruce! We are forever grateful for the generosity and care demonstrated by Ben and Sara for Bruce and for all of the cats they have saved.

Recently, PJ suggested that I do something that I enjoy. After thinking about what transpired with Bruce over the past several years, and admiring what Ben and Sara are accomplishing in Battle Creek, I decided to open a cat sanctuary in Jefferson Parish, Louisiana for abandoned and abused kittens and cats. We talked about Bruce and Ben and Sara during this discernment period and realized they were the spark that gave us the idea.

So, as we remember the tabby who traveled to a new home and with that new home started a friendship between two families who otherwise would not have met, we honor Bruce (and Ben and Sara) with Bruce’s Legacy, A No-Kill Sanctuary for Abandoned and Abused Kittens and Cats.

A Conversation with Rose

Does your rescue have a shelter or is it foster-based or both?
We have purchased the land, but as of yet have not started to build. As of now, the kittens and cats are housed at our house. I would love to have foster homes for our kittens and cats, but at the time I have been unable to associate any foster homes.

Do you partner with any other rescues?
We are presently not in partnership with any other rescue groups but would love to be. As an aside, I will travel anywhere in the country to deliver our kittens or cats to their loving forever home after several interviews with the potential adopters. Saving the few kittens and cats we have rescued, means a great deal to my husband and I. While we aren’t as large as other rescue groups, we do what we can for the ones we can.

Did the flooding in Louisiana last year affect your operations?
Our primary residence was not affected by the recent flooding. However, our secondary residence where I take the kittens and cats every other week for a week at a time was totally lost. We are re-building but it will take approximately seven to eight months to be back up and running. This was a place where all the cats could run around without being in an enclosed area.

Is there anything else we should know about the rescue?
I only adopt out healthy cats. They have all been tested for FIV and FeLV and are healthy. They have had all their shots and have been spayed or neutered. I do not charge for my adoptions but only adopt out to individuals or families that want an indoor cat only. Also, I make it a point to let potential adopters know that if something happens and they no longer want the cat or cannot take care of the cat, that I take my cats back. I don’t want any of my cats going to a shelter or being put out on the street. This is extremely important to me.

What’s a fun fact about yourself?
I guess something fun that sticks out in my mind is the day my husband came home last year. He walked through the back door, I was cooking dinner and he looked at me and said, “I just realized we have 24 cats that we are feeding and taking care of.” I just looked at him and said, “Yes, and this just occurred to you?”

Thank you to Rose for sharing with us about Bruce’s Legacy. If you are interested in donating to or adopting from the rescue, please message them through their Facebook page.

And if you’d like to know what happened to Bruce’s pal Rocky…Well, he became Rose’s third cat! Rose says of the 14-year-old cat, “He is a joy to be around and is a friend to everyone who enters our home. We call Rocky our social butterfly.”

27 thoughts on “A Cat Named Bruce Inspires a Sanctuary”