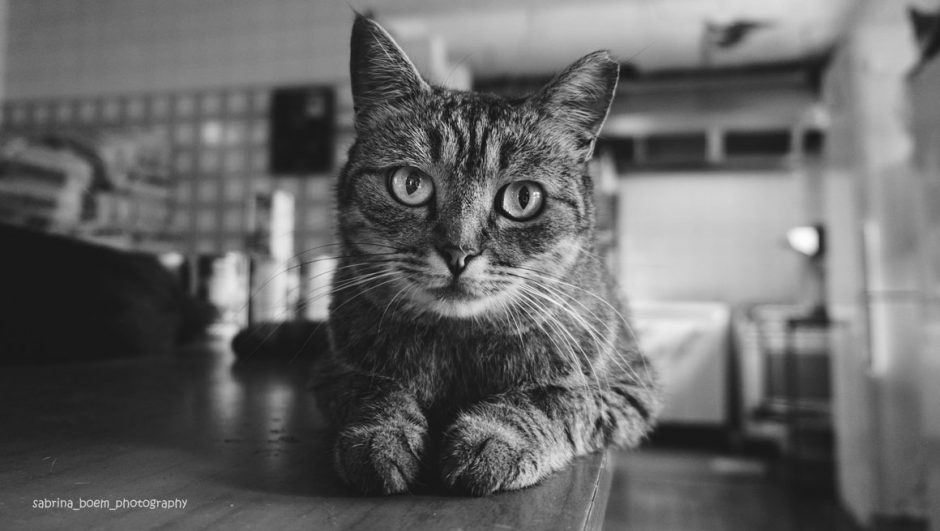 What shelter do you photograph at?
So far, I’ve taken photos in several shelters in northern Italy, in cat cafès where cats are waiting for adoption, in addition to the stray cats and colonies of stray cats that I photograph. I’m planning to go to other shelters in different parts of the country, even if it’s not easy to reconcile work, which is very demanding, and my passion for photography. When did you start taking photos at shelters?
It was only 1 ½ years ago that I went to a shelter as a photographer for the very first time. For two years before that, I had only taken photos of my two cats at home. I loved cats and I wanted to find new subjects. I hardly knew what a shelter was, I had seen one only once in my life when I was thinking of adopting a second cat. It had been a tough experience for me, seeing those cats in cages had been too much for me. It didn’t matter if those cages where as big as a room because all I knew about cats until then was that cats lived freely outdoors and in homes with yards.

I live in a small town near Venice, my vision of cats was stereotyped, but it was the only experience I had had until then. So, when I went to the local shelter looking for a kitty to adopt and saw all those sick, injured and abandoned cats, I just couldn’t handle it and was out of there in twenty minutes. That’s why when one day a friend of mine told me about a shelter where I could go and take photos, I wasn’t very excited about it. The truth is, I was afraid to get hurt again. I didn’t know if I would be strong enough to handle that experience again. But when my friend told me that my photos may be useful to help find a forever home for those cats, I decided to give it a try.

So, I went there and I took several photos. Two of them in particular are still two of the best shots I’ve taken so far. When I went back home and saw those images on my computer screen, it was a very special moment. Something got to me. That’s when I decided that those were the kinds of photos that I wanted to take and that I wanted to devote myself to documentary photography of shelter and stray cats.

What surprised you the most about taking photos at the shelter?
It was the same thing that struck me the first time I took photos of stray cats: their eyes. Stray and shelter cats, especially cats who have lived in a shelter or out in the streets for a long time, months or even years, have such an intense look. I like to have cats look at me when I take their photo. When I’m ready to shoot a photo of a stray cat, for instance, I try to make some noise, not too loud or they would run away and hide, but loud enough for them to notice me and look at me. That’s when I shoot, when a connection is made between them and me. And you know what? When I look at those portraits I see no cats at all. Those are people’s faces. And those are human eyes. Those are the eyes of human beings who tell a story. You just have to know how to read into those eyes and they will tell you so many different stories about how they have lived for years in a home with loving people before those same people threw them out on the streets, like old shoes nobody wanted anymore. Or how they were thrown in someone’s front yard one night when they were still little kitties because the human family where their mom lived hadn’t spayed her because they think that spaying is cruel, besides cats are independent, they know how to take care of themselves, so why not just get rid of them… or how they were born in the street because even if there are so many good-hearted volunteers who take care of colonies of stray cats, they cannot do it all and they can’t manage to spay and neuter all stray cats, so every year many more are born in the streets… These are the stories I’ve read in their eyes, all this time spent at the shelter and out in the streets taking photos of these cats. And that’s why I owe these cats respect, which means that it is absolutely not my intention to shoot pitiful images of unfortunate cats. Pity is not what my photos are meant to inspire. I would rather them inspire compassion, of course, because their life isn’t easy. But at the same time, I want to show how beautiful and dignified stray cats can be. From the very beginning, I shot mostly B&W because even if I didn’t know it back then, in my mind I had already started what a year later would become a real documentary project. I am inspired by photojournalism, my approach to these shots is honest in the sense that I never create any photo opportunity, I only shoot what I see as an impartial observer. Do you share your shelter photos anywhere else besides social media?
Yes I do, which is what makes me feel I’m actually doing something really to help. My photos are available for the shelters where I take them. Some associations do use them for adoption, for their websites where they promote their work, some of those photos were used for a calendar that was sold to raise money. All associations are in desperate need of financial aid, so I’m willing to use my photos to help them as I can. Sabrina Shares the Story of Tarù

I first met Tarù last summer. I was taking pictures in the park where I usually go, the local shelter is located there and lots of stray cats live there, too. I noticed a white and ginger cat following me. He followed me for a while, which seemed strange because usually in that park each cat has its own territory and they don’t move too far from it. But this cat kept following me everywhere. Every time I stopped to shoot, he would come close and start purring loudly asking for cuddles. I had never seen him before.

“I’m here for a shooting, sweetie,” I told him while rubbing his belly. “If I keep cuddling you, I won’t get my work done. Light is changing and I don’t have much time left.”

But when I looked at those big sweet eyes, my heart melted.

I went back a couple of weeks later on an early Sunday morning. There was no one around, all bars and restaurants and even the shelter were still closed. I saw him napping among the chairs on a table of a restaurant. I took a picture of him, that moment was a unique capture.

When I finished my shooting, a couple of hours later I went to the shelter, showed his picture to a volunteer and enquired about him. “That’s Tarù. He’s been here for a while, he’s been abandoned. We try to keep him inside, but the other cats don’t accept him and he doesn’t fight back, that’s why he’s always outside alone. He’s very sweet and always asks for attention, we’ll try to find a special family for him.”

Months went by and Tarù was still at the shelter. Then one day I read an update on the shelter’s Facebook page: “Tarù is missing. We tried to keep him inside the shelter but last night he escaped. If someone sees him, please contact us.”

The shelter is located in a very big park quite far from the town center, so we all hoped that he was just hiding from the other stray cats somewhere in the park. But a few days later, Tarù was spotted in town. How he had managed to go that far nobody knows. He was safely taken back to the shelter, volunteers tried again to keep him inside at night and let him outside during the day. It was clear that he was not an indoor cat and they didn’t want to stress him too much. But a few weeks later, Tarù escaped again and luckily enough he was found in town again. So this time, he was closed in a safe room, but Tarù didn’t adjust to living indoors. He kept begging for cuddles and wanted to go out. That situation went on for a year until a couple of months ago volunteers did manage to find the perfect family for him in a place where cars are not allowed, so he can safely go wherever he wants and he doesn’t have to live indoors.

Have a nice life Tarù. Every time I see your pictures, my heart still melts.

A Special Night for Sabrina

Sabrina was recently asked by the President of the Camera Chiara Photo Club to present her documentary photo project to the club and the public in general. She showed 80 photos from her project and spoke about how adopting her two cats, Sissi and Ricky, started it all, regarding her interest and passion in cat photography. Sabrina also played the video compilation of her photos (which was in a previous post), which moved some in attendance to tears.

Congratulations to Sabrina for all of her success with her documentary photography project. Your photos are beautiful and I look forward to seeing where your talent takes you.

Sabrina shares photos of her own two cats, Sissi and Ricky, on Facebook. You can connect with Sabrina on Instagram and 500px.

If you missed the first two posts with Sabrina’s photography, you can read them here: stray cat photography and people with cats.