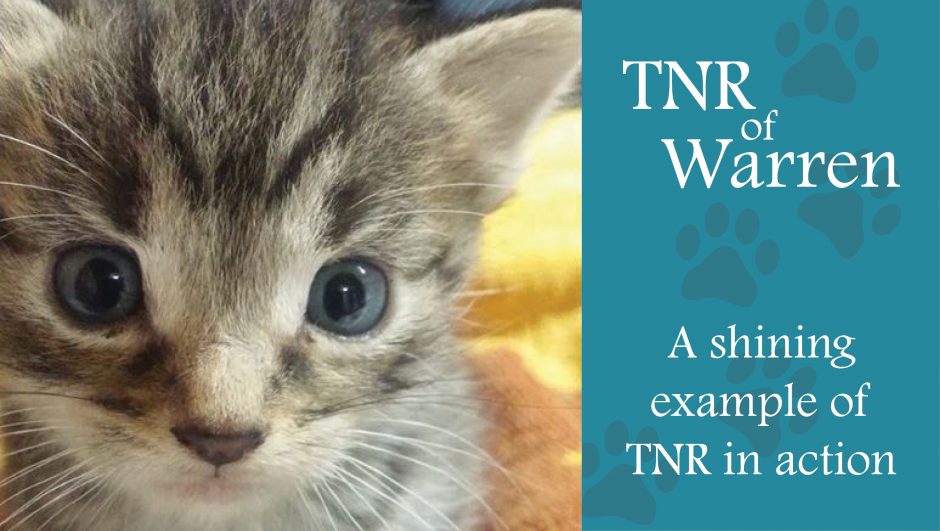 In honor of the upcoming National Feral Cat Day, today we continue with highlighting people and groups who are doing their part to help feral and community cats. TNR of Warren, a group that was founded in September 2008, started “as a vision of what can be accomplished when a Trap-Neuter-Return organization, veterinarians and the community work together for the good of stray and feral cats.”

TNR of Warren, a 501(c)3 organization, is located in Warren, Ohio. They are not a shelter and they do not take in cats from the public for adoption. The group is strictly a trap-neuter-return organization.

Corky, who runs TNR of Warren, has been with the group since January 2009. In the past, Corky has volunteered at shelters, rescued cats and been on the boards of various rescues. But when Corky was adopted by a group of free roamers in her yard, she knew what her life’s mission was… “to help the unwanted cats of the shadows.”

To date, TNR of Warren has spayed and neutered close to 9,000 cats! A Conversation with Corky

What region do you cover?
We turn no cat away. We have fixed cats from Erie, Pennsylvania and into West Virginia and everywhere in between. If someone needs a community cat fixed, we jump in to help. We hold mini-clinics (9 cats) every week, bigger clinics (35 cats) twice a month, and our largest clinics (110 cats) every six weeks.

What is your group’s mission statement?
“Our volunteer staff assists the community in trapping, neutering and returning feral cats to existing managed colonies. We assist caregivers by providing shelters and food to these colonies. We provide low-cost spaying and neutering to low income families within the community. We educate the public on the role of feral cats within the animal population and the need for population control among all felines.”

What is the hardest thing about doing TNR?
Trapping an amazing cat, which is super feral, and knowing the best we can do for the cat is to fix it, vaccinate it and return it because a warm cozy home full of love is not an option. What would you say is a common misconception about TNR?
People are always telling me “I can’t trap” and after some hands-on training, they come to a clinic with smiles on their faces and say “I did it!”

What advice would you give to someone who is interested in starting TNR, either individually or with a group?
Just start, the rest will follow. We began when several ladies attended a graduation party at a local park. There were cats everywhere and people were complaining. One of the ladies was a veterinarian and they all decided that they had to do something – and TNR of Warren began. That park, with over 100 cats in it, now has a managed colony of 10 cats. We monitor it closely. We adopt out any friendly cats that are dumped there and immediately fix every cat. TNR works and this park is proof.

That’s great that you are able to adopt out friendly cats who are dumped at a colony. Are you able to adopt out any of the community cats?
Sometimes, if they are borderline. We have adopted out mousers to some businesses.

Do you partner with any other rescues?
Yes, Angels for Animals offers us discounted spays and neuters and has taken some adoptable cats from us. Cats are People Too works very closely with us to get any kittens adopted. Is there a particular cat that stands out in your mind?
Bernie! Bernie showed up at my colony about eight years ago during a very harsh winter. He always hung way back and would run at any hint of movement. I tried and tried to coax him in closer. He seemed to have a hurt paw and I wanted to trap him, get him fixed and his paw examined. Gradually winter became spring and still no progress with Bernie. I always put out extra food near where I would see him. Then one day I saw that his paw was even worse, even though I was putting antibiotics in his food. He would never go near the trap. The next day I came out and he was in the yard. He tried to get up and run, but he could not. I ran for a towel, scooped him up and dashed for the vet’s office. She examined him and said it was too late, the infected paw had sent poison all through his body. He hardly had any color. I hugged him and told him how much I loved him and how beautiful and wonderful he was as she helped him cross to the Rainbow Bridge. Right before he did, he let out a sigh and looked at me as if to say I always loved you too and thank you. Then he was gone. I will never forget him.

What’s a fun fact about yourself?
In my off time (LOL I use that term loosely), I am in a Coaster club and have been all over the USA riding roller coasters.

Are there any TNR groups in your area?

37 thoughts on “TNR of Warren”