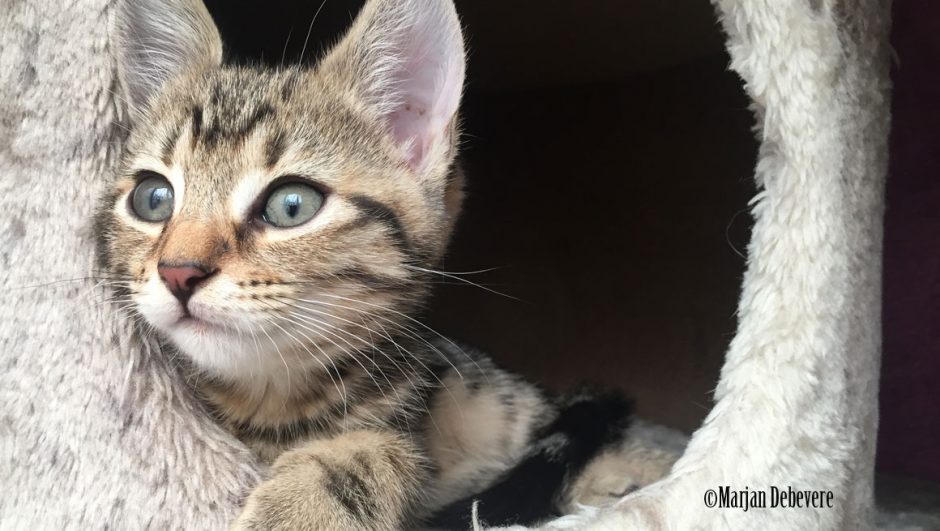 Marjan Debevere, an amateur photographer, has lived in London, England for the past 23 years, but she is originally from Bruges, Belgium. When not taking beautiful photos of shelter cats, Marjan studies Feline Behaviour and Psychology.

Let’s meet Marjan now and also find out what the poem reminders are all about!

A Conversation with Marjan How did you become interested in photography?
I’m just an amateur photographer who has a keen eye for all things interesting and beautiful. I have a small Canon 450D camera. But to be honest, I hardly ever use it to photograph cats. I find it too cumbersome to work with in a rescue environment. I like to have one hand free to interact with the cats, which large cameras don’t give me the freedom to do. All of my photos are taken on my trusted camera phone.

What shelter do you photograph at?
I currently photograph the cats at Wood Green, The Animals Charity, at their London Cat Re-homing Centre.

Will you please explain a little bit about the shelter?
The shelter was founded in 1924 by Miss Louisa Snow in Wood Green, London to care for the many abandoned and injured animals living on the streets of London. It has grown into one of the leading animal welfare organisations in the UK. They now have three centres, one of which is a 52-acre estate that can take in animals of all shapes and sizes.

In addition to dogs and cats, they find loving new homes for thousands of chickens, rabbits, mice, guinea pigs, goats, sheep, ferrets and much more. When did you start taking photos at the shelter?
I originally started taking photos about five years ago for a wonderful rescue centre called The Mayhew Animal Home, also based in London. Three of our four cats were rescued from there.

I remember seeing a photograph online of Hula, one of the cats we now have the pleasure of sharing our lives with, and falling head over heels, there and then. That’s when I realized the power of a great photo.

We adopted Hula and Clive at the same time, and I kept in touch with the wonderful cat adoption coordinator at the time, JoAnna, and offered my services as a cat socialiser and photographer. I spent two and a half wonderful years at The Mayhew, photographing in excess of 1,000 cats for their website, social media, calendars and press.

How often do you take pictures at the shelter?
I go weekly to Wood Green, The Animals Charity. It is their smallest branch, but this means I get to spend much more quality time with the cats, which is only ever a good thing in my book. It gives me that extra bit of time to maybe clicker-train some of the more stressed out or bored cats and concentrate on their mental well-being rather than just making sure I have a great picture of them for the website. Who doesn’t want to adopt a cat who high-fives you? What is the hardest part about taking photos?
Kittens are the biggest challenge to photograph, especially black long-haired ones. Young kittens are still so unsteady on their feet that the camera never quite knows where to focus, or they are having way too much fun with you to let you take the photo. Light conditions in cabins can be challenging as well as making sure no unsightly litter trays and food bowls are in the shot. I like the cats to be the star of the photo and have nothing distracting the eye of the viewer. Oh, and I have found myself sitting in a water bowl more than once!

I have a self-imposed rule when it comes to adopting cats – four and no more! The cats I get the most affected by are those who are 6 years plus and might have slight medical problems, which makes them that much harder to re-home. Kittens are cute, but kittens are kittens and are always re-homed quickly here in the UK. Older cats have a much harder time. It takes an extra special person to adopt an older cat. Will you talk about your interest in Feline Behaviour & Psychology?
Through working as a volunteer photographer and socialiser, I developed a great interest in Feline Welfare, Behaviour and Psychology. It also became apparent that I truly had “a way with cats” that became a great asset to the rescues I spend time in.

I somehow can get through to the cats and unlock them from their fear or upset. Some of my friends and family refer to me as the cat “Fairy Godmother” or “Whisperer.” You all know who you are…

I was at a crossroads in my career as a Freelance TV Producer and decided to start studying Feline Behaviour and Psychology. I originally just did a level 3 Diploma to see if it was something for me, but I got totally hooked so I am now doing a Foundation Degree in the same subject. I’m hoping to be a consultant in 18 months or so.

Is there a cat that you’ve photographed that especially touched your heart?
This may sound contrived but all cats touch my heart. It’s why I want to help as many cats as I can in leading better quality, stress-free lives. Simple measures taken at home can literally change the life of a cat and be the difference between being relinquished to a shelter for unwanted or inappropriate behaviour vs. living a happy, healthy life in a loving home.

In my humble opinion, we have to start with welfare at home so fewer cats end up at shelters in the first place. What pets do you have at home?
We currently have four cats. Yes, I have reached my self-imposed limit. First up Miss Hula, a five-year-old Tuxedo cat who runs the show. Then we have Clive, a five-year-old black house panther who was adopted at the same time as Hula. They are unrelated but very bonded. Hula was born at The Mayhew and Clive was found in a black dustbin bag left to die at five weeks old. They were put together in a cabin and became inseparable buddies.

The very first day I started volunteering at The Mayhew, I was “chosen” by Luigi, another Tuxedo cat who is the rebel, life and soul of this clowder. He is three and a half now but shows no signs of slowing down with the silliness. I hope he never does.

And then there’s Archie, two years old next week, the sweetest Tabby Tux who moved in from next door when he was about eight months old.

One night, my husband and I woke up in the middle of the night with him sprawled out on his back between us. Archie had decided that he wasn’t going home again. We did try to convince him to go back home, but in the end it was decided by the previous owners that he would be much happier with us, so we officially adopted him about 11 months ago.

Do you have a favorite organization that you would like to mention?
I would like to give a special mention to The Mayhew Animal Home. In addition to rescuing and re-homing animals, they also run a TNR (trap-neuter-release) program as well as Therapaws, a pet therapy program that visits care and dementia homes, hospices and hospitals. Their international branch, Mayhew International, trains vets in far-flung places like Russia and Afghanistan, and they help raise funds for animal welfare organizations around the world. They also help neuter dogs in India with the Hope and Animal Trust team.

What is your day job?
I have been a freelance Production Manager and Producer for TV and Corporate Promos for the past 16 years, but I’m hoping to make the switch to Feline Behaviour and Welfare consultant once I graduate. 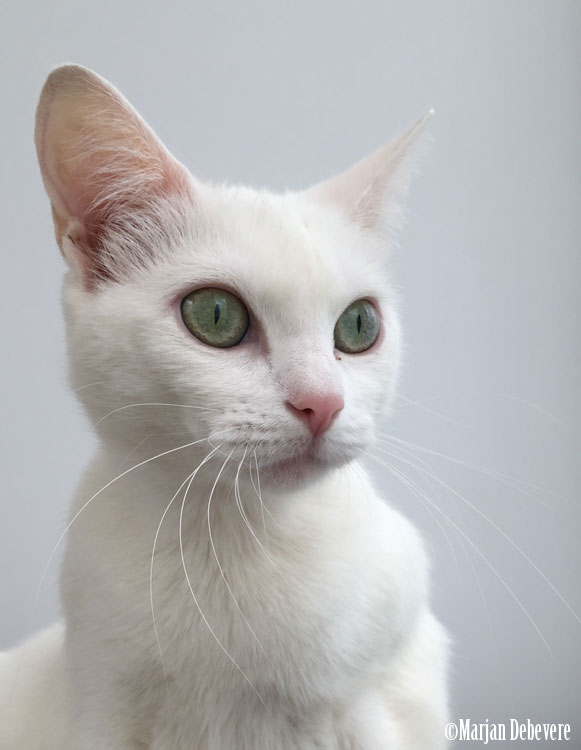 Is there anything else we should know about you?
This isn’t so much about me but my wonderful husband. Simon sends me a little poem every time I go to the shelter to remind me “we have four.” Here are a few of his classics: 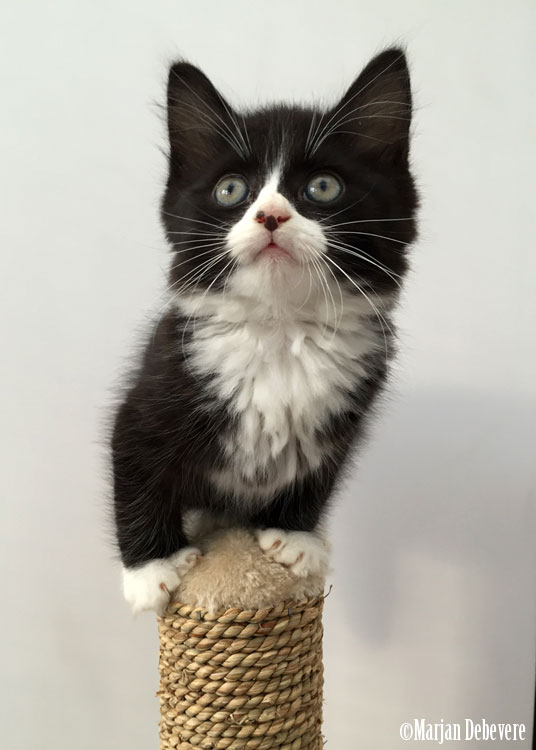 Thank you to Marjan for sharing her photography with us and for spending time with shelter cats, both enriching their lives and helping them get adopted faster with her beautiful photos. If you’re on Instagram, be sure to follow Marjan’s own cats’ account (@lillmanlulu_luigi_and_co).

More photos for your viewing pleasure!