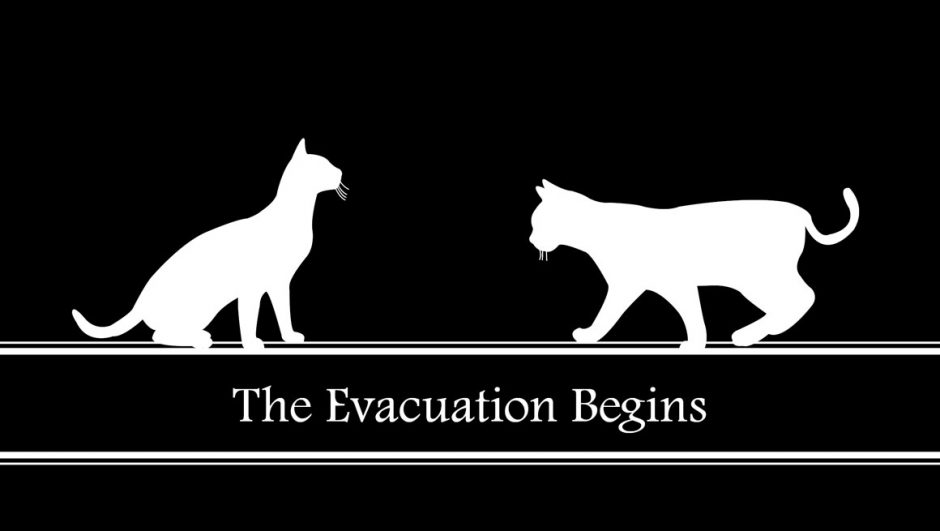 In Part 1 of Kat McCann’s story, we left off where Blackie and GrisGris were the two cats living with Kat. Today Kat shares with us the story of evacuating during Hurricane Katrina. On Thursday, we will learn the conclusion to her tale of survival.

I want to thank you for reading Kat’s story. These posts are longer than usual, but I personally found Kat’s story riveting and I hope you do, too. Three weeks before Hurricane Katrina hit in August 2005, my boyfriend at the time (who will remain unnamed) and I decided to move from our apartment. The one we were moving into turned out not to be ready for us in time. So, we put the bulk of our items in storage, and we stayed with our friends Nona, Karl and their dog Happy (not their real names).

We saw Katrina heading closer and joked about how we could stay in our storage unit, as it was above ground, climate controlled, and had a generator. Two days before the storm hit, Nona and Karl decided to head for Alexandria, Louisiana, where Karl had family. They gathered everything they could carry and basically told us to get out.

My 60-year-old sister Jane, who lived on the westbank in Gretna, Louisiana, insisted that we come to her house for the night so we could decide what to do from there. With Jane, lived my 82-year-old mother, Anne, and my 41-year-old nephew, Glenn. Jane also had Max, a Doberman.

The next day, the storm was looming large, and we decided that we must evacuate. We called shelters to see if we could bring our animals, but we were told NO. Especially when they learned that we had a 90 pound Doberman and two black cats.

We really had no place to go and bring our pets back then, which is why so many pets were abandoned.

I called my vet to see what could be done, and he told me that they could not take on the responsibility of anyone’s pets. But he advised me to make sure that I had all of their papers, and he said to be sure that their rabies tags were securely attached to their collars. Luckily, I am reasonably well-organized and I happened to have kept with me a waterproof file with all my important papers! But my guys were not microchipped. (Today, all of our cats are microchipped!) And because they were inside cats, they didn’t have their tags on their collars. Luckily, I had their tags with me, so I attached them.

We talked to our relatives in Georgia. Between family members, they were willing to provide us with safe haven. So, we packed ourselves up – me, the boyfriend, GrisGris and Blackie into my Honda Civic. And Jane, Mom, Glenn and Max (the Doberman) into her Blazer. The Journey to Atlanta

I only had one carrier at the time. Back then it wasn’t as important for me because GrisGris was used to riding in the car. He settled down in the back seat on our journey, and Blackie was happy to be in the carrier alone. I had the walking harness on GrisGris during our evacuation, and I had an aluminum pan with litter on the back floorboard, along with food and water.

Whenever we stopped, I let Blackie out to use the litter, and I attached a leash to her collar. If GrisGris wanted to stretch his legs, I would pull around to the less busy areas of the rest stop and let him walk with his harness.

And so we went. But it wasn’t as pleasant for the humans.

We had to endure a 24-hour ride to Atlanta from New Orleans. This usually is only a 7 to 8-hour ride! Because of the way that the evacuation routes were planned, we had to sit for hours at a time with no exits. We had prepared ourselves with snacks and toilet tissue, but we had not prepared for our mother. She could not go “in a pinch” – and I think it was one of the most embarrassing moments of her life to have to walk into a roadside rest stop with wet pants. We also had only packed for a week. We really thought that we were going to be back shortly to New Orleans.

And that is one of the reasons why so many people left their beloved pets. They thought they would be back quickly. Everyone looked at the track of the storm and said that it would miss us. It would go into Mississippi (which it did), and New Orleans would get wet, but would be OK! Or so we thought!

People set up their pets with food and water for at least a week and left. Mainly because they had no place back then that would take them with their animals. Also, because some websites had said that this was the safest thing to do, since animals were not allowed in shelters. This has since changed. Now shelters in Louisiana must accept pets with papers in proper carriers. All of ours now have their own carriers and papers!

When we finally arrived in Atlanta, after 24 hours of hell, we found a dry space, room for the animals and soft beds. We saw the weather reports, and it seemed like maybe we had reacted too soon. The storm had lessened when it hit, and it had not hit New Orleans dead on. We could head back home once we were rested. But the next day, something strange happened. I was watching the NASA weather satellite when it did – New Orleans started flooding! The levees broke! I was watching when the satellite showed it, and I watched in horror as it played out. The water kept rising and rising…until I didn’t think it could rise anymore!

During the next week, we found out that while my sister’s house stayed dry, the power was definitely out for a while. We couldn’t go back there right away. The apartment I had come from and the one I was going to move to were GONE. The friends that we had been staying with before evacuating were staying in Alexandria. The boyfriend left two days after arriving in Atlanta. I had no idea what was going on with me, my friends or my home. I just knew that my family was OK because I was with them – and the kitties were OK. I did not know where my friends were, or how they were doing, but I just wanted to figure things out, one day at a time.

So, there we were – me, my family and our pets. We knew that my sister Jane’s home at least did not flood. In fact, most of Gretna, Uptown New Orleans and the French Quarter did not flood. The portions that did flood were devastated and gut wrenching to see. In fact, we did little over the next few days but watch the news.

It Can’t Get Any Worse, Can It?

The day after we had arrived in Atlanta, my mom fell and broke her hip. She had to have surgery and an extended stay in the hospital and rehab. I credit the evacuation with shortening her life. I would have done anything for her not to have endured that 24-hour car ride! So, it was a double whammy when the boyfriend decided he was bailing on the situation the next day – off he went to his mother’s in Florida.

I was staying with one of my nieces, but things were getting uncomfortable. By then I knew from travelling in the past that Comfort Inn and Suites are pet friendly. So when FEMA funds became available, I moved to a Comfort Inn with GrisGris and Blackie. Nothing can ever be simple though, right? We had to switch rooms in this pet friendly hotel because the first room was infested with fleas and ticks from a group of hunting dogs. But the rest of my time in Georgia was spent there, and that room became my refuge.

And I needed that refuge. Almost all of my relatives were talking to me about moving back to Georgia, where I had grown up.

“Come on home,” they would say. “You’ll have to start over, but it’ll be OK.” I tried to explain to them that New Orleans is my HOME, and I was going back HOME.

I was able to reach out to the Georgia SPCA to see what was going on with the pets left in New Orleans. I was told that they sent a group of people to the city to be kind of the first responders for pets. Several local SPCAs around the country did this, and I will always be grateful for that.

Over the next few weeks, the National Guard was sent in to restore order. We heard that the SPCA had set up a temporary shelter in Gonzales for pets, hopefully to arrange for them to be reunited with their owners when they returned.

Jane and I decided that I would move in with her and help her take care of Mom when she was able to return. I started to hear from friends who had evacuated and survived, but most had left their pets behind.

We were all anxious to return. Finally, we were told that Jane’s neighborhood had power, and we decided to return home. Please come back Thursday to read the final part of Kat’s story and learn what happened when she returned home.