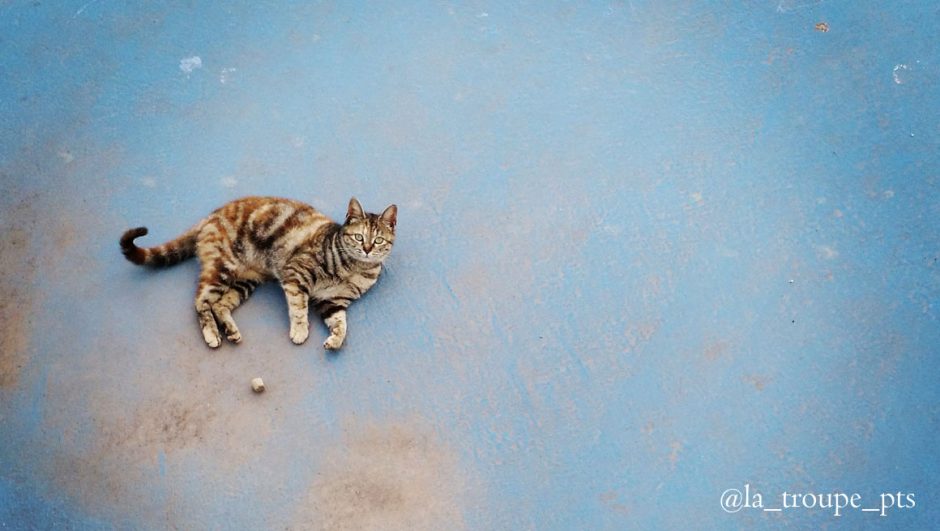 I first became aware of Olalla through her beautiful photos on Instagram. When I reached out to her about a potential photography profile, I learned more about what she does in Granada and discovered that Olalla cares for a colony of about 30 cats. While I will be featuring Olalla’s stray and feral cat photography in a later post, today we look at La Troupe and the colony of cats that Olalla cares for. A Conversation with Olalla

How did you get into rescuing and caring for cats?
My first rescue was a few months after I moved to Granada seven years ago: two abandoned kittens for whom I found an adopter. Three years later, I rescued my cat from a pet store. Someone brought her there because she and her litter mates were stoned; she was the only survivor. My awareness of stray cats’ difficulties has progressively increased and I started to feed a colony, first occasionally and then every day. By the end of last year, I decided to start a TNR project and that is how La Troupe arose.

Does anyone else in the community help you?
When I decided to carry out a TNR project in the colony, I emailed some animal organizations in the area. Only two answered. One helped me at the beginning of the project and the other one is still helping me. In the latter, there is a very lovely person (Maya) who fell in love with the cats of La Troupe and we became a team. She takes care of the colony when I am not in the city and we have been trapping together (she has even trapped alone) since January. She also was Blanqui’s (one of the cats of La Troupe) angel when she had an accident in January. She managed to catch her in very difficult circumstances so we could take her to the vet.

Do you have a personal mission statement?
I try to be active in my commitment with the environment and society, and I think that animals are also an important part. A key point is to raise awareness about stray cats in order to respect and protect them.

Can you describe what you do for the colony?
We try to do our best to improve their lives. We feed them every day, we provide them veterinary treatment when needed, and we are currently carrying out a TNR project. We started this project at the end of January and we have spayed/neutered 22 cats so far. We estimate that there are between 10 and 12 cats left, but it is difficult to precisely estimate it due to abandonment and the unspayed females. We have also found homes for two cats that were abandoned at the colony this year: Leo and Naranjito.

How do you cover the expenses?
At the beginning, we tried to get donations from family and friends, but obviously this wasn’t enough. Some of them decided to support us via “teaming,” which is an online tool to raise funds for helping social causes with micro donations of 1€ a month. But we are only 14 teamers and this means that we needed to look for other ways to raise money. Social media helped us to gain visibility and some followers made a contribution. We are also raising funds with the selling of products (for example, we are currently selling magnets with our logo) and we organized a raffle last month. We are going to sell a wall calendar with the pictures getting the most likes on our Instagram account by the end of the year, and we will also design new products to sell. At the moment, we pay more than 50% of the expenses out of our own pocket.

Is there a special cat that stands out in your mind?
I have to think it is Estampada. She and her sister Blanqui were the reason why I have increased my awareness about strays. I met them last summer when they were kittens beginning the weaning process. They were extremely sweet and they started to wait for me to feed them. When I went there, they always showed up to greet me. They let me know that they trusted me and this means a lot for a feral cat. We had a special bond. Unfortunately Estampada died two months ago. It was the saddest and the hardest moment as a colony caretaker so far. It still hurts when I go to feed them and she is not there. I am still trying to deal with her loss.

Is there anything else we should know about what you do for the colony?
We are using social media to gain visibility not only for our colony, but also for all the strays around the world. Let’s make a more stray-friendly world!

Olalla was kind enough to send us two magnets to give away to two lucky readers! Please leave a comment below by Wednesday, August 10th noon Pacific. The two readers will be selected by Random.org and will each receive one magnet. Giveaway open worldwide! You can follow Olalla and La Troupe on Instagram (@la_troupe_pts). Be sure to “like” the pictures you love the most – and they just may be selected for the wall calendar! You can also follow La Troupe on Facebook. If you would like to donate to La Troupe, you can do so via their Donate button on Facebook (via PayPal). Do you know someone who cares for a colony of cats? Contact us to let us know!