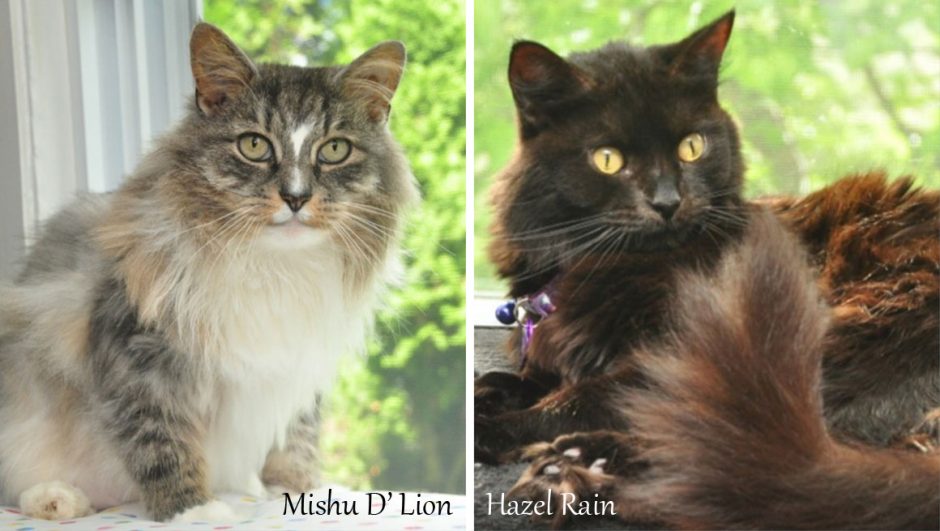 In the second post of the Adoption Tails series, we visit the topic of wanting a specific breed of cat – but that doesn’t necessarily mean you can’t choose adoption.

I’d like to introduce you to Kathleen J., who lives in Westchester, New York. Her story shows how the loss of one brave and lovely cat saved the life of another – through adoption. (Please have tissues on standby.)

To tell you about Hazel Rain, I first have to tell you about Mishu D’ Lion, who came into my life when I moved into a cottage two years ago. Mishu lived on the property at the time and slept under my cottage. She had been homeless for about four or five years, with my landlord and her son feeding her. The cat did not allow anyone to touch her, only the landlord’s son with some scratching on her head. I longed to give this cat a home, but I was not allowed pets in my lease. So, I joined in the feeding and would cook meat for her so she could keep up her strength.

The landlord’s son passed away suddenly, and I knew that the cat would miss what little love she had sought from him. I desperately wanted to save this cat, but she would run away so fast whenever I neared her.

On January 19th, 2015, on what I would call the last warm day of winter, I went to dispose of my garbage and was hissed at. I saw the cat I lovingly called Mish Mish sitting in a sun spot. I said hello and went and got some food and water. For once, she did not run away and actually gave me her head to be petted. I was so happy that I had won the cat over and then I noticed a bloody front paw. My heart broke and I decided that no matter what, I would take this cat in and would explain to my landlord that she would spend the night and that I would take her to a shelter the next day. I wanted to keep her, but I knew it was not possible with my lease agreement.

I quickly ran to the house and got a blanket. When I returned, I reached over and picked her up. She didn’t even make a move to bite or scratch me. I brought her into the house and saw that her paw was swollen and pussed over.

My friend told me to bathe her, which I did. She was so dirty, but out of that mess of a cat came a beautiful girl with a gorgeous chest mane. I went and spoke to my landlord and explained that I could not put her back outside, but that I would take her to a shelter the next day. Or, if she allowed me, I would assume complete responsibility of the cat. The landlord looked at me and told me that I could keep her but only because she knew the cat.

My heart burst into a million pieces of joy and I ran home to call my friend and give kitty a name – Mishu D’ Lion – because of her beautiful mane.

For a week, Mishu slept and I literally had to pick her up and put her in the litter box and lay her back down. She was exhausted from being homeless. I took her to a vet because her paw was not healing. It turns out that Mishu was very ill and on the verge of death, with a raging infection in her paw. With client donations, she had her toe amputated and also was given a lion cut. Mishu flourished, got better and became so gorgeous. We were happy even though she was shy and quiet. Little by little, Mishu was getting acclimated to her new life and home.

On September 15th, 2015, Mishu got an upper respiratory infection that brought forth a whole bunch of problems. She was diagnosed with herpes and calicivirus. For 8 months, I battled this virus to make Mishu comfortable. But she was just so ill and the calicivirus won in the end. I could not watch her suffer anymore. With pain in my heart, I had to let Mishu D’ Lion go.

Mishu taught me that a lot of love, patience and willingness go a long way. That by being wanted and given a chance, wonderful things can happen. I knew that because of my love for Mishu, I would rescue another cat that needed love and a forever home.

With my landlord’s blessing, I started my quest of searching for the one that needed me. After many websites and searches, I landed on allpaws.com. Because of Mishu, I had fallen in love with Maine Coons – so that is what I searched for. During one of my searches, I fell in love with a kitty, but at the last minute the foster mother could not bear to let the cat go. So, that kitty was not meant for me, and I continued my search.

I contacted several Maine Coon breeders and one called back, but the kitten was extremely expensive. And my goal was not to acquire anyway, it was to save a cat in need of a loving forever home. I wanted that kitty to feel what I’m sure Mishu felt with me – pure love and a place to belong.

I kept looking and one picture captured my heart. Her scared face told me she needed me and she was going to be my daughter.

I inquired about her and spoke to the rescue that had her. We emailed back and forth regarding Trixie D, as she was named at the time. I filled out the application and eagerly awaited any news. The rescue was very thorough with their process, checking references and speaking to landlords to make sure pets were allowed. For two days I didn’t hear anything. I was very anxious, so I emailed and inquired about my application only to be told that I was approved. It turns out there was a miscommunication, but I was so happy to have her as my baby girl!

On May 7th of this year, I made arrangements to pick up Hazel Rain (previously Trixie D) from Zani’s Furry Friends in New York City. A friend of mine joined me to go pick her up and bring her home. The rescue group was holding an adoption event in NYC at a pet shop. There, I signed the paperwork and put her in my carrier. The foster mother said that Hazel was “in a mood,” but I was at least able to pick her up and she was good.

When we got home, she was okay and playing a bit. She smelled, though, so I wanted to bathe her. But picking her up was a NO! She went a little crazy, so I let her be. Hazel Rain hid under my couch for a week, only coming out to eat and potty. After five days, she came out in front of me to eat and then ran back under the couch.

Sadly, Hazel was front paw declawed as a kitten. And when she hissed at her previous family, I think they may have hit her. Because when I raise my hand to pet her, she cowers, hisses and hits. The family took her to a shelter and claimed her as a stray, so as not to pay any fees. At the shelter, she was very aggressive, so they isolated her. She spent a year in a cage and was about to be euthanized when thankfully Zani’s Furry Friends stepped in and rescued her. From there, she went to a foster home and was isolated again, as she did not like other animals or too many people. Then, she came to me.

After a week of hiding under my couch, I wanted to help her to not be so afraid. I figured that if she took the chance to be in the same room with me without hiding, then she would understand that she was safe. I watched an episode of My Cat From Hell, and it happened to be one that helped me with Hazel. I thought about it for a bit, as I did not want her to see me as “mean” and I was worried about our future relationship. But I did it – I “smoked” her out from under the couch, and then I blocked all access to hiding places, forcing her to be in the same room with me.

She eventually found a window seat and used the curtain to hide. I took that away from her as well and let her be. Within a few days, Hazel was calmer and more accepting, and I was able to pet only her head. I was also able to administer ear mite medication by distracting her. Slowly but surely she came out of her shell and started shedding her fears.

During the time that she has been with me, her change has been remarkable. I love her so much and I am sure that she feels safe enough to be around me. We sit together and she nuzzles me a bit, and we play a lot. Hazel loves chasing the light around the room, and I love when she walks all over me at night and lies on my back to sleep. She gives me a sweet purr to let me know she’s there.

And there you have it – Hazel Rain in her forever home! Thank you to Kathleen for sharing the stories of both Mishu D’ Lion and Hazel Rain. Their stories show that it just takes the right person to love them and provide a perfect forever home. I hope Kathleen’s story inspires others to rescue and adopt.

Do you have a rescue or adoption story to share? Please contact us to let us know!