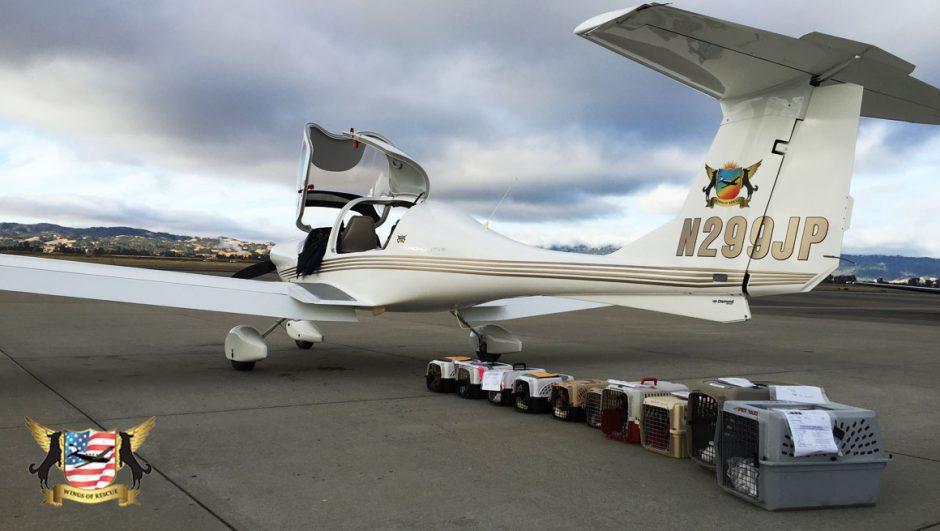 Many of you may have heard about Wings of Rescue, which is a 501(c)3 group of volunteer pilots who perform life-saving airlifts, transporting high-risk shelter pets from one region to another.

Starting tomorrow, Friday, July 8th, Wings of Rescue will be flying over 400 cats and dogs to new locations to save their lives.

Known as “Independence Flights,” Wings of Rescue is transporting the cats and dogs over two consecutive days, continuing the Independence Day celebrations for these lucky canines and felines.

As many know, July 4th is a busy time for shelters, with many pets scared of the fireworks celebrations, prompting them to flee and run from home, only to be brought to a shelter. So, the Independence Flights couldn’t come at a better time for these already overcrowded shelters.

This particular transport event touches close to home for me on both sides, literally. The cats and dogs are being pulled from animal shelters in Southern California, where I currently reside. And where are they going? Approximately 250 of the lucky pets are going to the Pacific Northwest, where I grew up and lived for 18 years. More specifically, they are going to shelters in the Seattle area, while another 150 are going to New Jersey to find their forever homes.

Ric Browde, who wears many hats for Wings of Rescue (including volunteer, Board Member and logistics coordinator!), had this to say about their rescue operation:

“In Southern California we have a profound problem, due to the good weather and pets being irresponsibly left outside by their owners, combined with a lack of enforced spay/neuter laws, we have a lot of backyard accidental breeding. This backyard breeding produces more pets than there are available homes in our market. The traditional way of solving this problem is for the open intake municipal shelters to euthanize the excess population.

We at Wings of Rescue have recognized that the same conditions do not exist throughout the United States and Canada, and therefore have put together a program to transport these homeless pets, who would otherwise be killed in shelters at the taxpayers’ expense, to no-kill shelters primarily in the Pacific Northwest where there are people waiting to adopt these awesome companions.

Wings of Rescue has partnered with Kriser’s Natural Pet and St. Hubert’s Animal Welfare Center as well as with local shelters and rescues in the Seattle area to safely airlift these at-risk shelter cats and dogs to their new loving homes in the Pacific Northwest and on the East Coast. Wings of Rescue relies solely on donations to pay for the cost of their rescue flights, which can cost thousands of dollars each. If you would like to support them in their mission, you can donate at their website.

Isn’t Wings of Rescue amazing? Have you ever been involved with shelter transport?

32 thoughts on “Wings of Rescue: Providing Freedom for 400 Cats and Dogs”