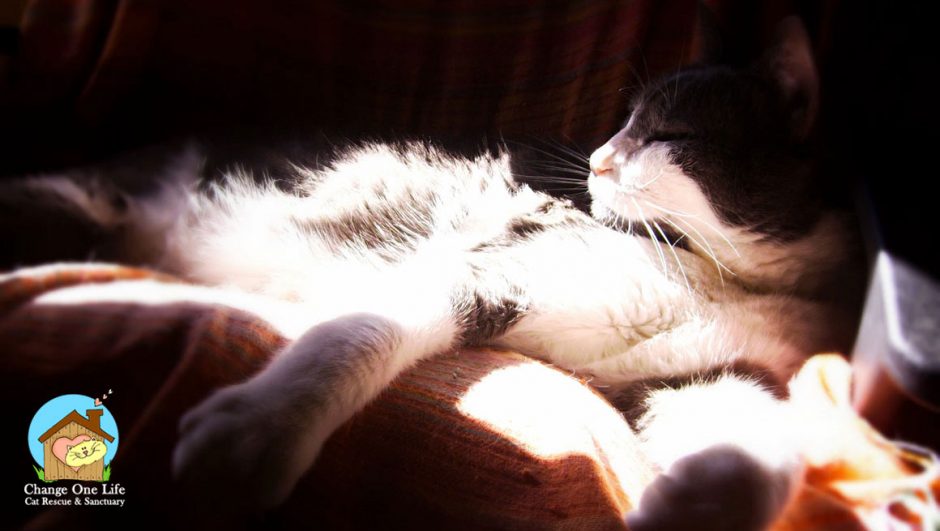 Jackie and Paul founded Change One Life in December 2012, a cat rescue that is a non-profit, volunteer-based grassroots group on the Canary Islands of Spain. They provide a sanctuary for abandoned cats, all of which have been rescued in the Southern area of Tenerife Island.

The rescue does not re-home any of the cats. 99% of the cats were once in homes, but then they were left behind and abandoned. From their mission statement: ‘Change One Life’ Cat Rescue provides a safe place for these cats to heal and be happy again. Homeless cats find in our Sanctuary not only a second chance at life but also and most importantly a loving forever home.

A conversation with Jackie How did Change One Life get started?
We started out a few years ago by providing water, food and care to homeless animals on the streets of our community. Later on, we moved onto rescuing and fostering. Having experienced great difficulties in finding suitable adopters to re-home our rescues, we then decided it was time for us to make a much greater commitment to make a real difference. So in December 2014, we launched our Cat Shelter project, and the goal was to start providing permanent housing to the cats that were already in temporary “foster care” – and from then on, to all our future rescues.

What is unique to your group vs. a traditional cat rescue?
Traditional cat rescues, at least where we are based, usually work as a network of private rescuers, volunteers and foster homes. There are usually many more people involved in the whole process of rescuing, fostering and adopting the cats out. We do everything ourselves, and we take full responsibility of the cats we bring in. What other support do you provide to community cats besides the Sanctuary?
Paul takes care of several feral cat colonies within our community on a daily basis. Every month, we supply approximately 60 kg of dry food, dozens of cans of wet food and gallons of water amongst several feeding stations. Paul spends about 40 hours a month in these tasks outside the Sanctuary, and his hard work on the streets has always played a key role in the success of our cat rescue operation. Do you have any sponsors?
We do not have any commercial sponsors yet! What we do have is a Sponsorship program for our rescues. Supporters sign up to make a very small monthly contribution to help in their basic care. So far, we have 64 active sponsorships out of 160 needed. Do you hold fundraising events?
Yes, we do. We’ve held two online Charity Raffles and a T-fund (funds raised by getting a minimum amount of T-shirts sold). Additionally, there was a raffle organized by one of our supporters in the UK and tickets were sold amongst people in their local community. We also have an online charity shop where we sell our merchandising and all proceeds go towards funding our cat rescue and shelter. Is there a rescued cat that stands out in your mind?
Bono was our first rescue in 2016; he holds a very special place in my heart. Besides the fact that he’s been profoundly traumatized by abandonment, he also suffers from strabismus and vision loss, which makes him extremely fearful and vulnerable. Upon abandonment, he found a hideout at a building parking lot nearby and we started bringing him food and water every day – but some neighbors did not want him there and kicked him out.

He can only see shadows and walks with great difficulty due to some permanent injuries in two of his legs. He was too scared to roam, so he would just wait for us at a corner to get his meals and then he’d spend the rest of the day lying under cars to get some shade. Every single minute he spent on the street he was at risk; we wanted to bring him in since day one, but he wouldn’t trust us. We could feed him, but we could not touch him. After seven long months of trying, we finally rescued him on January 16, 2016. Bono’s full rescue story, pictures and videos can be found here.

Anything else we should know about the rescue?
At the beginning of 2015, our rescues were being fostered in a vacant apartment we managed to “borrow” – a small place full of cardboard boxes and old blankets. Since then, the number of rescues has doubled and thanks to hundreds of people from all over the world who supported our shelter project with generous donations, we raised enough funds to rent a larger place to provide now permanent housing to 17 cats and 1 dog. So much has been accomplished in just a year, but all our hard work and our rescues’ future will soon be at risk again if we cannot find the financial support needed to carry on. Our Sanctuary relies solely on private donations, and funds are often really difficult to raise. What’s a fun fact about yourself?
Well, I guess the most fun fact about myself is that 15 years ago I didn’t really like cats much at all. Although I had been an animal lover all my life, I wasn’t particularly fond of felines until my teenage daughter brought in an orphaned kitten in a shoe box she had found in the garden next door; we named him Tommy. He was so unique, clever and funny that he won me over in spite of me! He was the reason why I decided to become a rescuer a decade later and the heart of our Cat Rescue project. He welcomed many of our rescues and even helped us with foster duties. Sadly, he crossed the Rainbow Bridge last year, on June 24, 2015, just a few months before his 14th birthday. It was devastating for us. He has a memorial corner at the Sanctuary and hopefully his legacy will live on for many more years to come.

A huge thank you to Jackie for sharing Change One Life with us and for helping abandoned cats of the Canary Islands. The Sanctuary sounds like a wonderful forever home for the rescued cats. You can learn more about the group via their website, Facebook and their LoveCATS Blog. You can also connect with LoveCATS via Facebook, Twitter and Pinterest. Change One Life has a GoFundMe page you can visit if you’re interested in donating to the Sanctuary.

You can help me reach my profile goal! If you have a rescue group you’d like to see featured, Contact Us to let us know.

81 thoughts on “Change One Life”