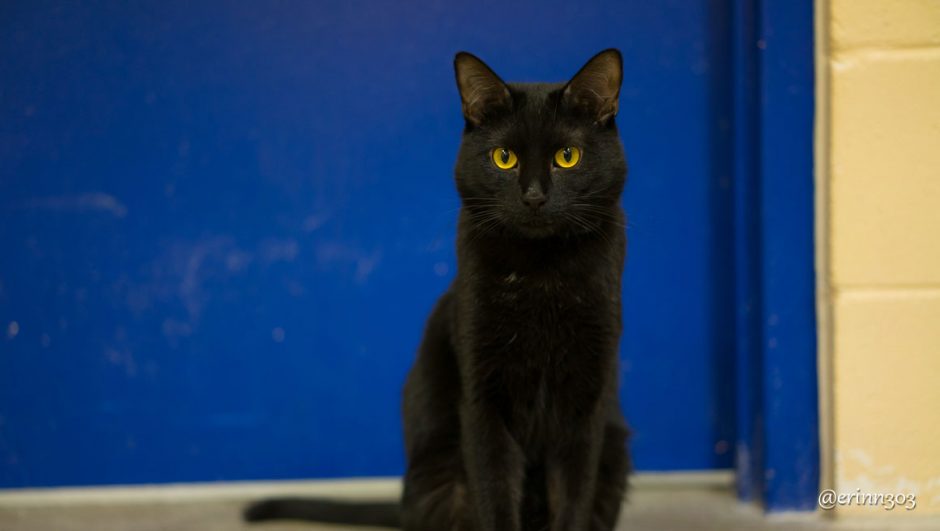 Today’s post is the kickoff to my Adoption Tails series. Each post will focus on a different aspect of adoption or something to consider when adopting a cat. And what better month to start this series than in June, which is Adopt a Shelter Cat Month! So, let’s get started with the series and look at an often overlooked color of cat when it comes to adoptions.

What do you think of when you hear the words “black cat?” I hope you think of beautiful, loving, cuddly, precious, perfect…you get the idea.

Sadly, not all potential adopters feel this way. Some are superstitious; some are looking for a cat that photographs well in less-than-ideal lighting. I can’t really think of any other reason why black cats would be harder to adopt out. A cat is a cat…is a cat…is a cat, right?

A black cat just wants a forever home like any other color of cat, so why don’t we look at a black cat adoption story to inspire others to adopt. And this isn’t the  tale of just one black cat – but three!

This adoption story starts out as many do. Someone wanted to add a cat to their home and contacted an adoption agency. But this someone, Alison, knew she wanted a black cat. So, two years ago when Alison contacted City Critters in New York City, she asked if they had any black cats and also listed a few specific traits she was looking for. The rescue organization was likely overjoyed to have someone calling specifically for a black cat. Alison learned at the time that a stigma still exists with black cats and that they are considered bad luck by some. And oftentimes, they are the first to be euthanized and the last to find homes.

City Critters told Alison about one special black cat who had been with them for a year since kittenhood, with no one wanting to adopt her simply because she was a black cat. Alison said, “It broke my heart that this gorgeous, brilliant little animal had spent all of her known existence in a cage because people are ‘scared’ of a superstition.” I bet you know what happened next. Alison adopted this little black kitty, named her Sally, and the rest is history. Almost.

When the time was right, Alison and her husband decided to add a second cat to their home. Alison asked shelters to let her know of any black cats that needed a home. She learned of a litter of black kittens that had been born on the streets in Brooklyn. “They came to us full of worms and pretty scared of humans. But they have quickly become the most happy, affectionate pair, and Sally took them under her wing almost immediately. The three of them are the sweetest and most fun, affectionate bunch you could ask for, and we are insanely smitten with them!” Alison not only adopted three black cats, but she also does her part to help raise awareness of the fact that black cats tend to be most vulnerable because of false perceptions. Two of her kitties are happy to go out on a leash in public and interact with people who are charmed and delighted by Alison’s cats.

Alison knows that changing people’s thoughts on black cats still has a way to go. But she takes it in stride and pokes a little fun at the silly perception. She gave them all ‘witchy’ names (Sally Owens, Lucius Malfoy and Winifred Sanderson) and refers to them as ‘The Coven’ – which she says makes people laugh and realize how uninformed some are about black cats. “Hopefully more people will give them a chance and open their homes and experience it for themselves!”

If you’re not in the position to go out and adopt a black cat at the moment, you may be wondering how you can help black cats and change their perception. Or, maybe you just want to read some wonderful stories of black cats. Why not hop on over and check out this Kickstarter campaign for Black Cats Tell All.

“This is the first anthology of positive stories about black cats and narrated by the fearless felines to debunk the superstitions. They feel it’s time to tell the world the truth. These 22 real, black cats share nothing in common except the color of their fur and a yen to pen their stories.” Source As we all know, everyone loves taking pictures of their furry friends. And one of the reasons some might overlook adopting a black cat is because they don’t photograph well. Let’s just put that thought to rest and wrap this post up by showing you these beautiful black shelter cats.

If you’re looking to adopt a cat, please don’t discount a black cat. He will thank you for his entire life. And yours will be thoroughly enriched!

A big thank you to all who participated in this post about spreading the word about adopting black cats.

Do you know any beautiful black cats? Bonus question, can you name the three movies that Alison’s cats are named from? Sally Owens, Lucius Malfoy and Winifred Sanderson.