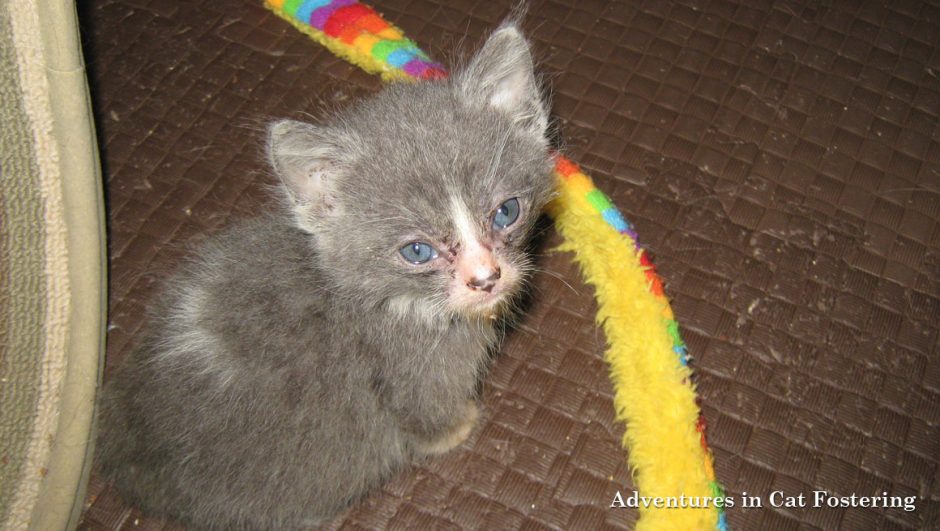 Last month I did a profile on foster parent and fellow blogger Heather Davies. I asked her at the time if she had a favorite foster story to share. While she said she had a couple, her nearest foster fail was a kitten named Hamish. So today, Heather is doing a guest post to share Hamish’s story with us. The quoted text in the story contains passages from original posts from Heather’s blog.

The Story of Hamish

Beautiful queen, Arabelle, and her six kittens were brought to Toronto Cat Rescue from one of our partner shelters outside the city. She was friendly and affectionate, clearly she’d been a pet. And yet she – and the family – would have been euthanized if TCR hadn’t taken them. One of my readers suggested the “Brave” theme and the kittens were named Merida, Willow, Elinor, Angus, Harris, and Hamish. I was concerned about Hamish right away; he seemed to have a terrible upper respiratory infection (URI), he was missing his whiskers and most of the fur on his muzzle and paws (malnourishment?), and was much tinier than his littermates. When I mentioned this, our intake coordinator remembered that the shelter had said something about “throwing him in” with the litter. So Arabelle was not his birth mother.

We figured he was about a week younger than the others (four weeks) and he was desperate for attention and nourishment. But even at this age he was noticeably affectionate – he loved being held. I was extremely concerned about him for the first couple of weeks. He had terrible diarrhea, so we got him on worm medication and I started giving him extra meals by bottle, taking him with me (along with the smallest of the rest of the litter) to work. He did not thrive at first and I noted that “Hamish is definitely the ‘odd man out’. Poor little dude just seems resignedly accepting of whatever happens to him — whether that’s having his little butt bathed under running water or being left out of all the ‘reindeer games’. He’s not improving so we’re trying to get him in to see the vet.” The vet pronounced him sick, but “not as sick as he looks”. They also discovered a scabbed-over, pus-filled sore on his little butt – from the diarrhea, mostly likely. They cleaned him up and all the kittens had to go on antibiotics.

The rest were doing well, but Arabelle was increasingly uninterested in mothering. After just 12 days, two things happened to abruptly change our little world. Arabelle began being actively mean to the kittens. “I discovered blood in Harris’s ear the other night. After a bit of a panic and some cleaning I could see a scratch in his ear! It could have been another kitten, but it was a pretty heavy scratch so I’m guessing it was Arabelle.” The second factor was an urgent rescue of another queen and her seven kittens. They were with a potential hoarder who was being threatened with eviction. So Arabelle was sent to be spayed and re-fostered and was adopted in a couple of weeks. The five kittens – now eating on their own – were split between three other foster homes and were eventually adopted. Hamish stayed with me! “I will keep little special needs Hamish and hopefully integrate him into the new family. Dude is making progress, but still needs extra attention and regular baths!”

Three days later, Gabby and her six kittens arrived. They became the “Hell on Wheels” gang; Mei, Nell, Lily, Lou(ise), Eva, Cullen, and Mickey. FIVE calico girls and two orange and white boys. Hamish was thrilled. He raced around the nesting box, meeting and greeting, and introducing himself to everyone. They were a stunningly gorgeous family and poor little Hamish stuck out – physically – like a sore thumb. But he integrated with them better than he ever had with the “Braves” and was one of the gang almost immediately.

After their first week, I noted: “Although Gabby is clearly on her way to being done with motherhood, she was wonderfully patient with little Hamish. He was (and still is) very needy and she was quite willing to let him nurse whenever he wanted — mostly. In fairness, every time she lay down he’d come running. I do think that more often than not it was the comfort he wanted. I suspect she’ll get firm with him at some point or he’ll happily nurse until he weighs 15 pounds! I’m not going to interfere as long as she’s ok with it — the little guy deserves it, for now.”

Just as everything was settling down, Hamish had to go back to the vet – again! The worst case of ear mites I’ve ever seen. Even the vet was a little grossed out – although totally enamored with him. Hamish, and whoever else seemed to need some extra attention, was still coming to work with me. He became a favourite wherever he went.

About a month after arriving, everyone was settled and stable, though struggling with digestive issues and trying to get big enough for their spay/neuter surgeries. “Murphy [resident cat] has definitely decided he doesn’t like the kittens. Maybe there are too many. Last night I caught him whapping a number of them on the head as they came to investigate him, with Hamish (the Brave) bearing the brunt of his wrath.”

A couple of weeks later, Gabby and the three biggest (not Hamish) went for their surgeries and then to an adoption centre where they were quickly adopted.

“Hamish is, what in bygone days would have been called a “going concern”. These days “pain in the ass” is more accurate. He tortures his siblings and gets into everything. I had to wash his paws multiple times after he ran through fresh cleaning solution; it’s “green” but I still don’t think he should ingest it. He attacked and scattered the bag of scraps from the new floor. While the rest napped he was still ripping around, occasionally jumping on [the other kittens] and generally rabble-rousing. Everything is a toy! The little dustpan and whisk I have for sweeping up scattered litter — while I’m using it; the litter box scoop — while I’m using it; the vacuum — while I’m using it.”

“This morning I saw the sweetest exchange. Hamish is a bit rambunctious. (!!!!) He tends to play too rough with his siblings, especially now that Gabby isn’t around to discipline. The resident cats (and Claire) have been doing their part, if only in his interactions with them. They regularly hiss at him and box his ears. I’ve even seen them knock him flying! I’d feel bad, but he usually deserves it and has to learn. This morning he came up to Jonesy, very politely, and they touched noses. Jonesy lifted a paw in readiness, but Hamish was already turning to walk away. Jonesy, oh so gently, patted him on the head!”

Finally, two months and two days after his arrival, Hamish went for his neuter surgery. He went directly to an adoption centre on a Friday night. By Saturday I was telling myself that if he wasn’t adopted by Sunday he was coming home. But he was adopted, of course. I am extremely lucky that his adopter has kept in touch. I recently received this beautiful photo and report:

“I swear he has to be the most easygoing cat in the world. I took him home to my parents’ house for Christmas – 3 hour car ride there and back, 5 days in a strange house with 5 people he’d never met, Christmas dinner with about 15 adults, 2 babies and an 85 pound boxer, and he was totally cool with all of it. He’s been on the bus, streetcar and subway, and every time just lies down in his carrier and falls asleep (and getting him in the carrier involves opening the door and watching him walk in – that’s it).

Other than his size not much has changed since I brought him home: still purrs the second you pick him up, still loves to be carried around, still licks everyone and everything he can.” So, from one of the roughest starts I’ve seen to gorgeous, pampered pet. I still use him as the example that there is such a thing as an ugly kitten. ;-) Even so, for now, Hamish is “the one that got away”. I still miss him, though it helps to know he’s got a great home and is so loved. And I know that if I adopt any of my fosters, it means I can’t help as many other needy cats.

A big thank you to Heather for 1) sharing Hamish’s story with us, and 2) for fostering and caring for so many cats and kittens! You can follow Heather’s blog to keep up-to-date on her fosters.

40 thoughts on “The One That Got Away”