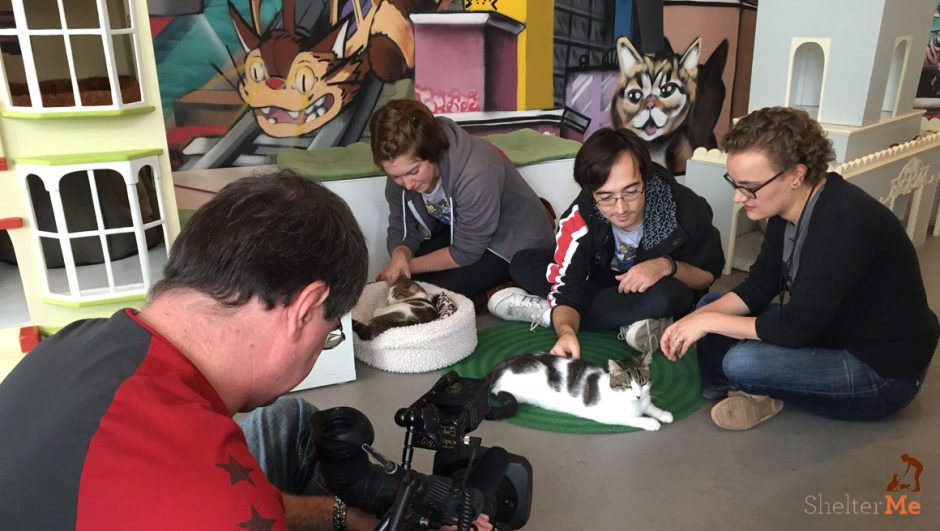 I was recently given the opportunity to watch the upcoming national PBS show “Shelter Me: Hearts & Paws” that premieres on May 22nd. Filmmaker Steven Latham created the “Shelter Me” series because he wants communities to get involved with their local animal shelters by adopting, fostering, donating, volunteering and/or by networking shelter pets through social media.

I was thrilled to watch the episode and then be able to pose questions to the two people featured. Hosted by celebrity animal lover Kristen Bell, the hour-long episode is broken into two parts, and here’s what you need to know about the 6th episode in the “Shelter Me” series.

UPDATE: Episode 6 is now available to stream online at shelterme.tv.

Viewers not only get to see the adorable cats available for adoption at the café, but we also get to follow along and see how the cats are selected from the shelter to be placed at the café. Ann Dunn, founder of the Cat Town rescue group, is quick to point out that they are not rescuing from the shelter, but rather they partner with the shelter. We follow the journey of a few cats selected and also learn about what goes into making Cat Town Café successful.

After watching the episode, I asked Ann about the general direction of cat adoptions in the U.S. and how a space like a cat café is beneficial during the adoption process.

Ann said, “We’ve received such positive feedback from other rescue groups who are trying to do something similar, so I expect we’ll be seeing more cage-free adoption centers like ours. The feedback we get from our adopters is that the process feels more organic, since they can see the cats in a relaxed atmosphere and have an opportunity to see their true personalities, helping them feel more confident they are making the right choice.”

The second half of the “Shelter Me: Hearts & Paws” episode features award-winning artist and “Mutts” comic strip creator Patrick McDonnell and the inspiration behind his “Shelter Stories” series. Viewers get to see a behind-the-scenes look at a shelter, as we follow Patrick along as he spends several days at a shelter, meeting volunteers and staff, adopters, and surrendered animals as well as owners being reunited with lost pets.

It is fascinating to watch Patrick meet an animal or adopter, get his inspiration and then immediately start sketching. At one point in the episode Patrick points out that a misconception about shelters is that there is a lot of sadness – but he also sees a lot of joy, and that is apparent in his strip.

Patrick responded, “With Shelter Stories, my focus is always on the reader – to gently remind them to help homeless animals. But this is a great question. I’ve always felt that art has healing powers and that, with your art, you can be a positive force in the world. So I would wish that my fellow cartoonists would be inspired to ask themselves how can I help?”

In both segments of the “Shelter Me: Hearts & Paws” episode, there are tear-inducing moments, both from happiness and sadness. I said “awww” out loud more times than I can count – and there were a couple of “oh my goodness” moments for me as well.

It is wonderful to know there are people out there who dedicate their lives to helping animals, like Ann Dunn, and people who use their celebrity and influence to bring attention to shelter animals, like Patrick McDonnell. This episode, and the series in general, sheds light on these individuals and reminds viewers about the importance of adopting or simply supporting shelters in your area. And what better way to be reminded of this than by watching these positive and uplifting stories.

While I was permitted advanced viewing of this episode, I can tell you that this is something I would have watched regardless. It is quite inspiring as well as educational. It’s a must-see for any animal lover.

“Shelter Me: Hearts & Paws” premieres on May 22nd on PBS, and you can check your local listing to see when it will air in your area. Also, the first five episodes of the “Shelter Me” series will begin streaming online for free at ShelterMe.tv on May 24th. Celebrity hosts include Jon Hamm, Jane Lynch, Allison Janney, Katherine Heigl and Edie Falco.

Here is the promo piece for episode six. It starts about 30 seconds in, after the Petco Foundation promo. I hope you tune in on May 22nd and enjoy “Shelter Me: Hearts & Paws” as much as I did!

What do you think? Is this something you would watch?