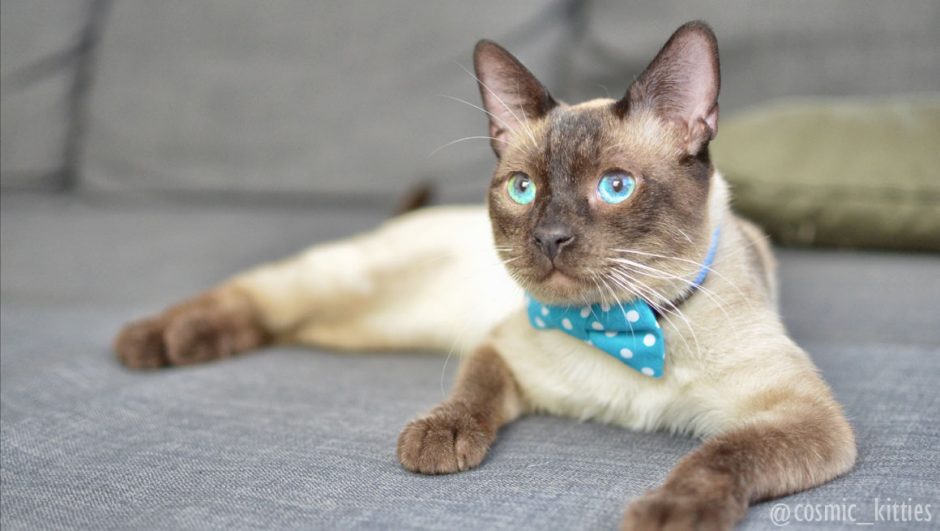 Sophie here! You may remember that the Human Lady Mama told you how she attended America’s Family Pet Expo last month. You can read all about that here. At the end of the post, she teased that she was going to be sharing an adoption story that came from that very expo. That is one of the things that makes the expo so great – all of the animals who find forever homes! Since the Mama said I could have more blog time, I thought I should be the one to tell you about this fellow kitty’s adoption.

It was a gorgeous Spring day on the weekend that Caelum’s adoption story begins. Actually, Caelum started out that day as Arthur. He was one of the kitties that The Cat Cove brought to the adoption event. I imagine Arthur was pretty excited at the thought of finding his new home that day!

Chris and Zac (spoiler alert – Caelum’s new parents) had been talking lately about adding a third cat to their household. Chris said he didn’t attend the expo with the absolute intention to adopt that day, but Zac figured there was an 80% chance of adopting at the expo. The two had previously adopted their other cats, Perseus and Orion (are you seeing a theme here?), from The Cat Cove and they knew the rescue group would be at the expo. When they arrived at the adoption section of the expo, they visited The Cat Cove’s area to see what cats they had for adoption.

When Chris and Zac first walked by the cages, Caelum (Arthur at the time) was sleeping, so they moved along and looked at the other kitties – and some were already adopted! When they passed through again, Caelum was finally awake and full of energy. Perhaps he sensed his new owners were near. He was jumping all around and rubbing up against their hands, probably saying, “You, I pick you two as my new humans.”

Chris said that Caelum had the most adorable face and the bluest eyes (I guess this Chris fella hasn’t seen my eyes, but that’s neither here nor there). Zac eventually asked to hold the cat. And from the moment he was in Zac’s arms, it was a done deal.

Zac said, “I felt such a strong connection with him. And after seeing his face up close, I just fell in love.” Caelum had found his forever home!

Once Caelum arrived at his forever home, he was separated in a room and the other two cats put in another room. Chris and Zac did the scent exchange thingy (providing towels that have been gently rubbed against the other cat, which the Mama says is very helpful when introducing new cats to each other). After the initial separation period, Caelum finally got to meet his new siblings one at a time. First up – Orion. Apparently, some sniffing occurred and they followed each other around for a bit. They seemed to be okay with each other, but very cordial. Next, Caelum met Perseus… and it did not go so well. Perseus was immediately defensive – hissing and growling – and then he ran away and hid in the bedroom. Don’t worry, Caleum. Olive hisses and growls at me all the time. I think it means we’re frenemies.

Chris reports that Caelum is growing more confident and playing more and more every day. He and Orion chase each other around the house, and Caelum loves to nap on the couch and in their bedroom. Perseus still hisses anytime Caelum comes too close, though. According to Zac, when Perseus hisses and growls, Caelum just stands there with a look that says, “I don’t know what your problem is, but can we play together soon?”

Thank you to Chris and Zac for adopting Caelum and sharing his adoption story with us. If you’d like to follow the adventures of Orion, Perseus and Caelum, you can do so via Instagram (@cosmic_kitties).

If you’re thinking about adding a feline friend to your household, please think adoption first! There are so many homeless cats who need forever homes. That’s all for now! ~ Sophie #adoptdontshop 34 thoughts on “Caelum Gets Adopted!”