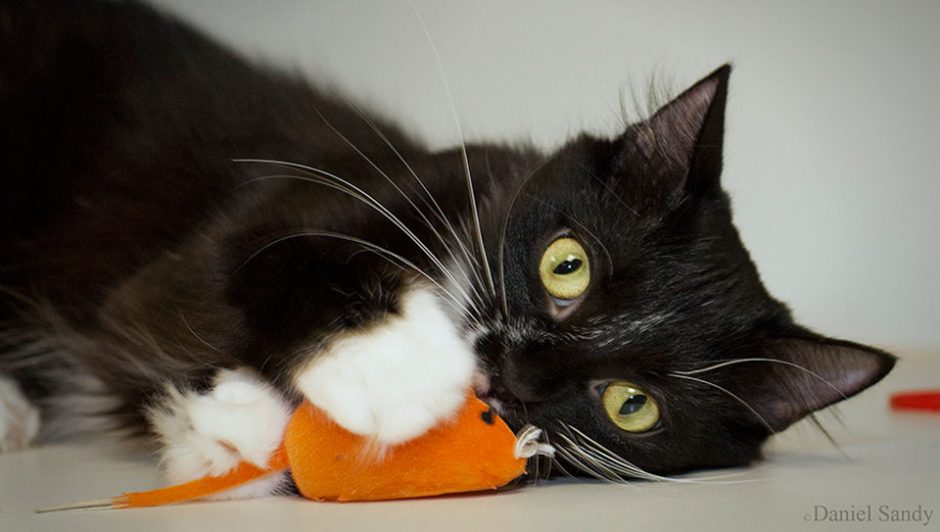 By day, Dan Sandy has been a Computer-Aided Drafter for the past 14 years and is currently a Technical Designer (CADD) in Northeastern Ohio. But Dan doesn’t just use his skills to make maps, blueprints and other technical schematics, he also volunteers at the Cleveland Animal Protective League and takes photos of their shelter cats. He has been volunteering and photographing at Cleveland APL since August 2009.

A Conversation with Dan Please explain a little bit about Cleveland APL:
Located in the Tremont area of Cleveland, the Cleveland Animal Protective League relies solely on donations and program fees to investigate and prosecute animal cruelty in Cuyahoga County and assist nearly 15,000 homeless animals a year through a variety of progressive programs. The Cleveland APL has been creating “happily ever afters” in Northeast Ohio since 1913.

One reason I love them is because they won’t put animals down due to limited space, or the amount of time spent at the shelter. When space is at a premium, the APL substantially reduces the adoption fees through different adoption events, or has even given animals away to suitable adopters! Otherwise, the animals are lovingly cared for until they find their new home! It’s just a great place full of great people.

How did you become interested in photography in general?
Inspired at a young age by my older brother, I’ve had a passion for photography for the better part of two decades. It was only about 10 years ago that I started getting into it a little more seriously. Through joining a local photography club, I’ve been able to learn and cultivate an environment that drives me to learn more about photography!

What inspired you to start taking pictures at the shelter?
It was initially because the online cat photos were less than flattering, but eventually it was just a good excuse to pet a ton of cats while hanging out with some great people. Additionally, I love cats and photography, so I figured it made sense to merge the two.

How often do you take pictures at the shelter?
I go once a week, and typically spend 2-4 hours taking photos, and then an additional 6-10 hours editing the photos later that eve. My Saturdays are almost exclusively spent editing photos of cats… Needless to say, I don’t have much of a social life during the weekend… or during the week due to my job.

What surprised you the most about taking pictures at the shelter?
How much I’d learn about photography and how much I’ve enjoyed being there.

What is the hardest part about taking pictures?
Aside from some of the cats trying to escape while I’m taking the photos, the most challenging thing is the constantly changing lighting conditions between cages. Some of the cages are so poorly lit that photos are near impossible to capture. If it becomes too difficult to get a shot, I’ll ask one of the other friendly volunteers to hold the animal while I photograph the “model”. The rewarding part is that I’ve become more proficient at adapting to changing lighting conditions!

Do you share your shelter pictures anywhere else besides social media?
I upload photos to the shelter’s website, and then I also send all the images to the shelter for use in their promotions and use with media outlets. My cat photos have graced the pages of Cleveland APL’s website & literature, media websites, local newspapers, and even several appearances on the daily news! The funny thing is that I rarely know when they’re published… I typically find out because friends or family tell me they saw the photos.

What’s a fun stat you can share?
I’ve taken just over 58,400 cat photos, and an additional 7,200 photos at different fundraising events for the shelter. When you take into account that I have 4 different versions of each photo (RAW, PSD, Large JPEG and a small “web friendly” JPEG), I actually have over 220,000 image files just from my volunteer work!

Do you have a cat that you photographed that especially touched your heart?
There was an older orange cat that I ran across that was nothing more than skin and bones. Despite his health condition, he was affectionately purring and headbutting while I pet him. I stayed at his cage longer than usual, just petting and photographing this old-timer. He reminded me a lot of my first cat, who I loved dearly. Sadly my first cat had renal failure and had to be put to sleep at the young age of 18. Little did I know that this elderly orange tabby was soon to suffer the same fate. Only a few minutes after I moved on to photograph other cats, my new furry friend was ending one journey and starting another. As soon as I found out what was going on, I was devastated. The one silver lining to this story is that I know that he was happy till the end, and I’m grateful I was a part of that.

Do you have any pets at home?
I have one adorable Smoked Tabby that was given to me by a former neighbor. They discovered that their other cat had FIV, and they didn’t want her to contract it… So, I welcomed Sadie into my home, and have been delighted ever since!

Do you have a rescue organization that you’d like to give a shout out to?
The Cleveland APL is a great organization that goes out of their way to help all sorts of animals. I encourage the readers to check out their website and possibly donate to a wonderful shelter.

The Cleveland Photographic Society is another non-profit organization that I hold in high regard. They are dedicated to teaching and promoting photography, while helping the community. In addition to that, they also have a group of photographers that volunteer their photographic skills for local non-profits (including at the APL!). I’ve learned more about photography in the past 4 years than I did on my own over the past 20 years, and I would highly recommend it to anyone who wants to get more serious about photography.

Anything else we should know about you? A fun fact?
I received the “2012 Volunteer of the Year” award, which is given to 3 people out of over 900, from the Cleveland APL. I’m also a board member and photo competition chair person at the Cleveland Photographic Society. Along with that, I frequently compete in their photo competitions, where I’ve gotten 3 “Photo of The Year” awards in different categories and several additional honors. I also just received the 2015-2016 “Photo of the Year” for nature photography through the Cleveland Photographic Society. Thank you so much to Dan Sandy for sharing his beautiful photos of shelter cats with us. His photos have no doubt helped countless cats show their best side and find their forever home!