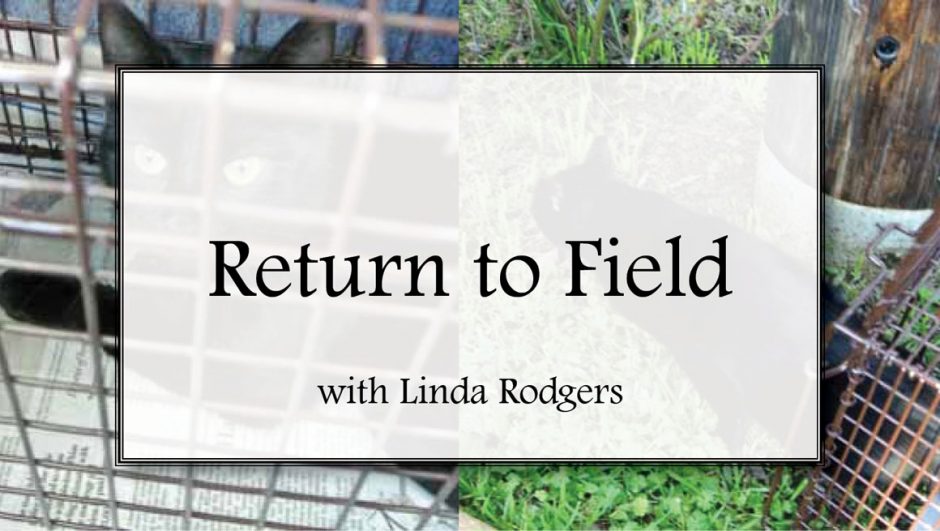 At one of her favorite volunteer events called SNIP (spay, neuter impact program), Linda met the founder of Outcast Cat Help, who is the transfer partner that initiated a Return to Field (RTF) program at the local county shelter – which is how Linda came to be involved with RTF.

Being familiar with Trap Neuter Return (TNR), but having never heard of RTF before, I asked Linda to share and educate us about RTF and how it truly helps cats in the community and is saving thousands of lives.

An excerpt from a blog post Linda wrote explaining RTF:

“A free roaming cat aka community cat, etc., is trapped by a member of the public and brought to a public shelter. Although the cat is perfectly healthy, she is feral and unadoptable. Even if somewhat friendly, the shelter may have neither space nor a foster home to hold her. Traditionally, she would be euthanized, but RTF gives her another chance for life. She is spayed, ear tipped to prove she is altered, vaccinated and held only for a day or two for recovery from surgery. She then is picked up, usually by a transfer partner aka rescue, and is transported back to the location from which she was trapped, and released by the driver.

RTF immediately reduces the euthanasia rate at the public shelter by saving the lives of those community cats who end up there. However, the estimate is that on average, there are 3 more community cats in need of spay/neuter (TNR) for every cat who ends up in the shelter. When we release a cat, we may make a quick sweep of the neighborhood and find out if there are caretakers in need of help with TNR assistance from one of our partner rescues.”

A Conversation with Linda

Do you know about how long RTF has been around?
I believe this was pioneered by Scott Trebatoski, current Animal Services Director for Hillsborough County in Florida. In 2008, he moved to Jacksonville, Florida and in collaboration with community partners, i.e. “private rescues”, he began what was perhaps the first full-scale Return to Field program for a public shelter. This shelter went from likely euthanizing all trapped community cats brought to the shelter to saving over 5,000 cats in the first full year of the program. This is the earliest I can find the mention of RTF. I know that it was later on championed by Best Friends Animal Society and by Maddie’s Fund, where it plays a key role in their Million Cat Challenge for public shelters in North America.

The difference is simple, yet very dramatic. RTF is a public shelter-based program. It is specific to community cats already in public shelters. A privately funded cat rescue organization cannot establish an RTF program without some type of cooperation from the local publicly funded animal services shelter.

All cats in an RTF program were originally trapped by someone in the community and surrendered to the public shelter. In some cases, a cat might be trapped as a stray, and if the shelter finds it to be friendly to humans, it will be placed for adoption. However, the true community cats (ferals), even if healthy and in good body condition, would be euthanized in a few days. Enter “Return to Field”.

In some cases, the shelter performs the neutering and in others, the cats are transferred from the shelter to an offsite clinic. In either case, the cats are returned to their trapping locations by transfer partners, volunteers or even staff.

What do you currently do for RTF?
I am a very proud Feline Express™ Driver. After the cats’ recovery from surgery, I pick them up in their feral dens at the county shelter. I have the addresses for their return early and map out my trip for the best routes. Sometimes I have only one cat, others up to four.

What would you say is the biggest misconception about RTF?
The greatest misconception is that “no one wants those cats returned”. It is true, someone trapped the cat to get it out of the neighborhood and/or because it sprays or keeps having kittens. Over ninety percent of the cats deemed feral, have good body condition scores and have clearly been fed well, as their coats are in good shape. The feeder of the community cats loves them even if he or she cannot pick them up or touch them.

Are there any opponents of RTF?
As with any program which involves community cats who have been trapped, spayed, neutered and then returned, uninformed community members may not want them back. Just as with the TNR program, RTF is a target for Audubon Society members who believe community cats are the sole source of loss of some song bird populations. All RTF programs reach out to local wildlife organizations to insure that community cats are not in public wildlife habitat areas such as local parks, wetlands, etc. RTF includes a key component which is to help educate the neighborhood where the cats are returned. We leave flyers with information about how to deter cats from your yard and a business card to contact Outcast Cat Help if they have any questions. If we believe the cats might come to harm if returned to a particular address, we relocate them to barns, horse race tracks and such to serve as rodent control and they are treated like royalty for their service!

Do you have any stats that you would like to share?
In 2015, Outcast Cat Help saved the lives of over 600 cats who would have otherwise been euthanized as they were considered feral and unadoptable. That number was achieved with little cooperation from our county animal services shelter due to former management’s unwillingness to be fully supportive. At that time, OCH was paying to have each cat spayed/neutered, vaccinated, and wormed, flea and ear mite treated, etc.

However, at the end of 2015, Contra Costa County Animal Services brought a new very progressive Director on board. Since her arrival, she and her staff and medical team have fully supported the RTF program, and the animal services department absorbs all costs for S/N, vaccinations, Revolution treatment and worming. By the end of March 2016, we have saved 147 community cats through the RTF program. We anticipate surpassing the 2015 number.

Is there a rescue group that you would like to mention?
I take great pride in being associated with the RTF efforts that Outcast Cat Help has worked on so hard over the last 20+ months. This is an all-volunteer 501(c)3 cat rescue dedicated to “humanely controlling the community cat population”. #morepurrlesshiss

What does Savannah think about RTF and your involvement?
Savannah’s Paw Tracks is a blog created to serve Savannah’s life goal – “Let’s Paw It Forward”. She is also known by her Twitter handle as Ms. Savvy Do (@mssavvydo), an endearing nickname I gave her early on. She believes that as a former adult shelter cat, it is imperative to spend all of her nine lives on having fun, being silly AND taking on Paw It Forward projects that will help adult shelter cats survive and thrive. But she also never forgets the time she spent living alone, outdoors, fending for herself. Savannah gives me lots of APAWS for everything we do to support humane management of overpopulation of community cats. I could not do this work without Savannah by my side so to speak.

And if you’d like to share – what’s a fun fact about yourself?
For myself, I guess a “fun fact” might be that I used to be a sort of crazypants silly person. I have photo evidence of showing up at my job dressed as a “lady of the night” (in the 70’s complete with blonde wig and white patent leather heels), Santa Claus and yes, I did wander my university employer’s grounds in Athens, OH on Halloween dressed as a “mime” clown passing out candy. Scared the heck out of the University President when I crashed his executive staff meeting! Now I am a boring, retired, shy senior woman looking to Paw It Forward with Ms. Savvy Do.

What are some resources that people can visit to learn more about RTF?

A big thank you to Linda for sharing what Return to Field is all about! Not only is she an excellent resource on the topic, she’s also fully dedicated to helping the lives of community cats by volunteering with Outcast Cat Help and supporting their RTF efforts!

Did you already know about Return to Field? What do you think about it?