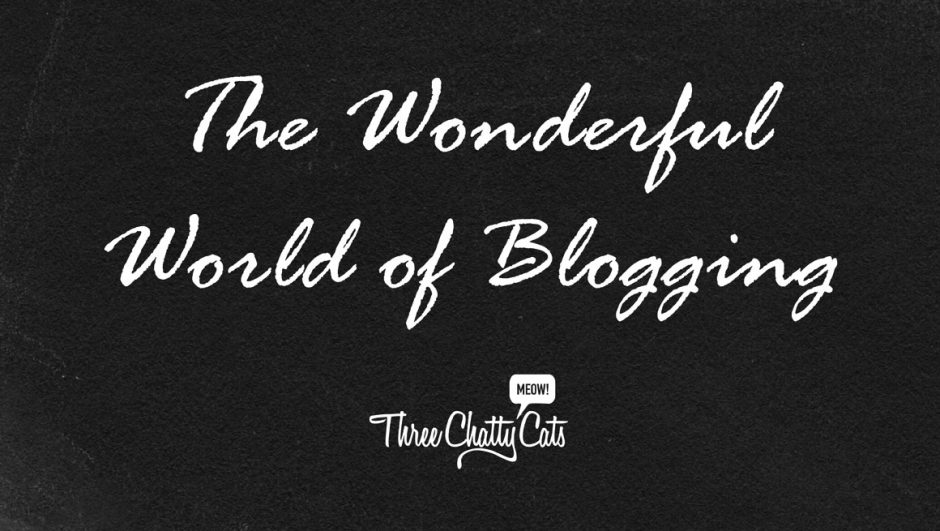 In three days, I will officially have had my blog for three months. I’m still quite a newbie in the blogging world, but I feel so welcomed and supported by those that I’ve met (virtually) and hope to meet in person at the BlogPaws 2016 Conference in June! While the majority of my new-found blogging comrades are within the pet blogging world, I have also enjoyed getting to know non-pet bloggers as well. Pet or not, bloggers are certainly a supportive group of people and a great community to be a part of.

One of the pleasures I’ve had while blogging is collaborating with other bloggers on a few posts, which I definitely hope to do more of. I’ve also learned so much about cat welfare in general and the rescue system. Blogging has been quite an education process for me.

Not only are my fellow bloggers wonderful, but so are the readers! I have received great support from a number of dedicated readers, and that’s one of the main reasons why I started Three Chatty Cats – for the reader! I have also witnessed so much giving and support from the readers to the rescue groups I’ve featured and individuals I’ve profiled. More often than not, I’ve seen a post connect a reader with a group or rescuer to either donate items or money – or just offer general words of encouragement. And that is really what this is all about!

To top it all off, I have received kind words of support and encouragement aimed at little ol’ me. I received a Liebster Award Nomination from Beyond the Blue Coat in February. I was completely surprised and honored to be thought of. At the time, I didn’t know that such blogging nominations existed or went around, but of course I have since learned that they are here to help get to know fellow bloggers. I humbly accepted the nomination from Paula and you can read that post here, if you’d like.

Since that nomination, I’ve been even more flabbergasted at receiving a few more nominations. I thanked each blogger at the time, but I never posted anything on Three Chatty Cats because I didn’t want to bombard my readers with here-I-am, read-about-me type posts. I’m not one to toot my own horn and I even feel a bit awkward posting this. My blog is dedicated to the kitties, not me! Know what I mean?

But with all that said, I don’t feel that’s fair to the bloggers who took the time to read and nominate my blog. I want to share them with you as well and show my appreciation for all their blogging efforts and hard work they have put into their own blogs.

So, here are all of the bloggers who have been so kind to recognize Three Chatty Cats. I’d like to give them my deepest appreciation. Thank you to everyone for supporting and reading Three Chatty Cats! I’m looking forward to meeting even more bloggers and readers as I continue my blogging journey.

If you want to actually learn more about me, you can read all of my answers to their nomination questions here.

Beyond the Blue Coat

Written by Paula, a veterinary student. She writes about life as a vet student, travel, photography and more. (Liebster Award Nomination, February 24, 2016)

Luca, who resides in Italy, shares his cats with us and also the occasional poem. (Liebster Award Nomination, March 4, 2016)

“Felines opine on the world from their viewpoint” – Written by Anita, an unashamed cat fanatic. (Liebster Award Nomination, March 10, 2016)

The world of Buddy Foster, the cat, as shared from his ailurophile cat mama, Brenda. (Liebster Award Nomination, April 10, 2016)

If you’d like to support me on my blogging journey, why not pop on over to my Profile Goal page and make a suggestion or two.

52 thoughts on “The Wonderful World of Blogging”