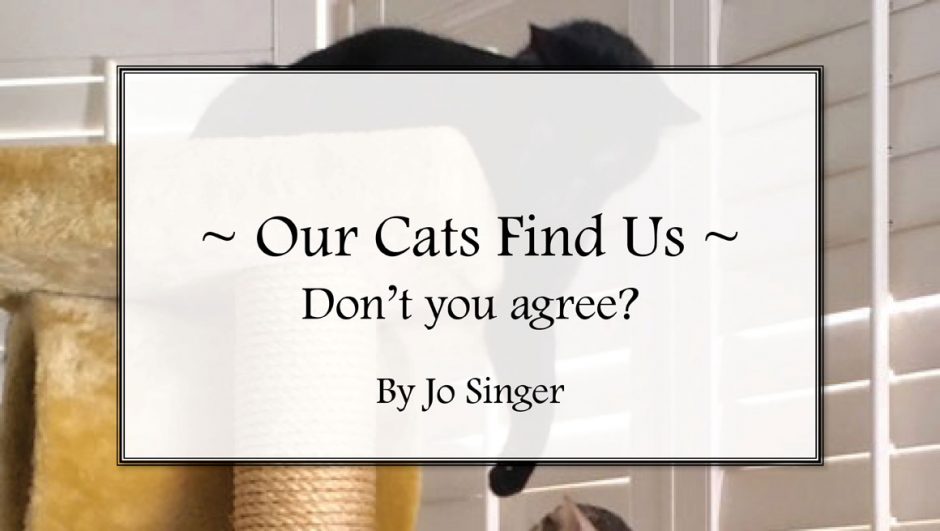 Today’s heartwarming tale comes from Jo Singer, the “two-legged furless one” behind the wonderful site Purrabula – A Feline’s Search for Meaning. But before you mosey on over to read the musings of Jo’s three cats, why not learn about how the gang of three came to be and how Jo became their chosen one.

Our Cats find us: Don’t you agree?

My name is Jo Singer. My husband Marty and I live in Central Florida; after we transplanted ourselves to the Sunshine State in 2001. Kitties have captured our hearts forever.

Cats captured my heart when I was a little girl. My dad was an avid felineophile; my mother – not so much; so I wasn’t owned by kitties until I got married. One of my husband’s friends gave us a teeny black kitten as a wedding present. We named him Nemesis to fit his personality. We then adopted a black and white female kitty who we named Circe.

A few years later a friend gave us a Seal-point Siamese named Yo-Yo; a remarkably sweet, precious being. She brought so much joy into our lives and taught me a lot about felines in general.

I remarried in 1990. Thank goodness my second husband, Marty, loved cats. Through a set of miraculous circumstances, we were able to adopt two Oriental Shorthair kittens. We named the white one “Trouble”, since he always was getting into mischief. The lilac point had been named Hush Puppy, but a few years later we renamed him Dr. Hush Puppy. We also renamed “Trouble” to Sir Hubble Pinkerton; a name that was inspired by his adorable pink ears, nose and paw pads.

Sir Hubble Pinkerton and Dr. Hush Puppy were joined at the hip. They did everything together and were always curled up together in a ball when they weren’t flying around the house at breakneck speed. Sadly however, shortly after Dr. Hush Puppy turned 15, he became very sick. We tried everything to help make him better; to no avail. We couldn’t bear to see him suffering. It was then that we made that incredibly difficult decision to release him from his pain and suffering. His loving veterinarian gently transitioned him to the Rainbow Bridge in my arms, surrounded by those who loved him so deeply.

Sir Hubble pined for him. He roamed through the house calling for him. He slept in all the places they shared together. He grieved deeply. About two months later Marty and I decided that getting a kitten might help ease Hubble’s loneliness. It was around that time that Hubble stopped eating, so Marty and I went to Petco to buy several different varieties of cat food that might tempt Hubble’s appetite. We were suddenly drawn to the adoption area.

Suddenly a small black paw appeared from a cage, reaching out to us. It was then that we met Edgar Allen Poe – a five month old kitten who told us that he picked us to take him home. Without any hesitation we contacted Angels Have Whiskers; the shelter that had put him up for adoption. Two hours later Poe (the name he came with) was settling in our bedroom, but he told us that his name was really Edgar Allen Poe.

After the two week isolation period was over, we slowly started introducing EAP to Sir Hubble Pinkerton. Hubble wanted nothing to do with the kitten. He didn’t appreciate EAP’s high energy play in the least. We tried site-swapping, we tried everything in the world to help these two kitties enjoy each other’s company, but it was not in the cards. Since we had made a commitment to EAP for life; rehoming him was out of the question. A veterinarian friend told me that the only solution was to get another kitten. I thought to myself if we get another Oriental Shorthair, it might be easier for Sir Hubble to relate with.

It turns out that I was right. Within a few weeks we met a breeder who had a kitten who also needed a home. She sent us photos. We were smitten with the kitten! Although it was hard for us to have to wait until he was old enough to leave his mom and sibling, we finally brought the stunningly beautiful kinked-tail blue ticked tabby home. We named him Aki.

To make a very long story shorter – Aki and Sir Hubble are starting to be joined at the hip. Aki plays with EAP. They also have a very special bond. Since they are always chasing each other around the house and finding great games to play, the don’t bother Sir Hubble at all. Hubble is an old man – 15 ½ years old with several serious health conditions. But he is so happy to be able to curl up with Aki, his new baby brother. While we still greatly miss Dr. Hush Puppy, Aki has also crawled into our hearts.

Since EAP was never socialized with people as a young kitten and was shifted from shelters to fosters and then back to shelters, he missed out on early bonding with humans. He and Marty are finally bonding and EAP is showing him affection. I am hoping that EAP and I will soon bond more closely too.

We have three cats! They have all made a remarkable adjustment. Marty and I are overjoyed and feel so blessed that these kitties have found us. We love happy endings; don’t you too?

We do, Jo – we love a happy ending! Thank you for sharing the story of your three kitties with us. And we agree – our cats do find us!