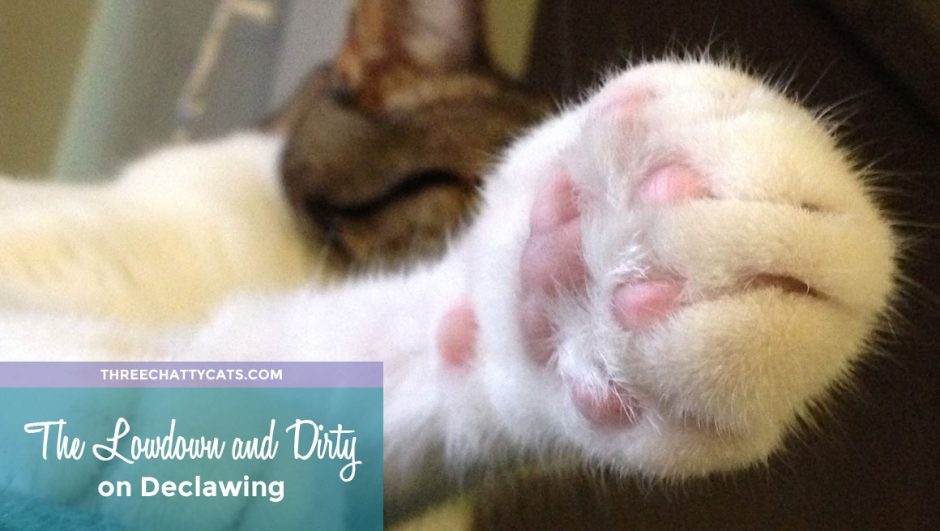 Declawing, a.k.a. onychectomy, is a very heated and controversial topic. In honor of Declaw Awareness Day (March 29th), I want to do just that – raise awareness about what declawing is and its harmful effects on cats. I can only assume that the majority of cat owners who have the elective procedure performed on their cats simply don’t understand what is actually involved with the surgery, hence Declaw Awareness Day!

Here are some snippets I’ve grabbed from the wonderful worldwide web. I hope, hope, hope that someone considering declawing does their own thorough research and then realizes why they should not declaw their cat. (Full source info listed at the bottom of the post.)

Here are some quotes that I have gathered on declawing and the “no-declaw” movement.

South Orange County Animal Hospital is one of only two clinics in Orange County, California (that I could find) that does not perform declawing. When I asked them why they do not declaw, they provided the below statement:

“South Orange County Animal Hospital does not offer declawing. This decision is a combination of anecdotal experience of its staff members, as well as peer reviewed journal articles regarding the medical consequences of declawing cats. Our staff members collectively have a wide variety of experiences, some including performing declaw in cats and others with extensive experience in animal shelters seeing relinquished declawed cats with behavioral problems including biting and inappropriate urination. As we discussed this as a team, as a hospital, all staff members were educated of the consequences that can occur with declawing a cat. Subsequently, our position has been and will be that declawing will not be performed in our facility.”

When contacted by Three Chatty Cats for a quote as to why she got involved in the “no-declaw” movement, Lori at City the Kitty said:

“I got involved in the no-declaw movement a couple years ago after I had read all about the cause on the PawProject.org website and saw how many cats are having that inhumane procedure done to them. After more research, I realized how many cats are unnecessarily suffering and going through such a cruel and disabling surgery. It really broke my heart seeing that millions of cats had to go through such a painful thing and all for the sake of a piece of furniture. I jumped head first into the cause with City the Kitty and now work 16 hr days, 7 days a week as a volunteer to help end it.”

Susan Whittred, DVM and New York co-director for The Paw Project, who we interviewed for a profile on our site earlier, supports a bill that would make New York the first state to ban declawing. She was recently quoted at ArtVoice.com saying:

“A relatively high percentage of cats are still being declawed despite all the recommendations against it. Targeting this problem through legislation is necessary and overdue. This bill is not an infringement on the veterinarian’s role at all. In fact, veterinarians are helping lead the efforts to see it pass.”

After all that, why do we declaw in the United States?

Apparently money talks. From what I can gather, that is the only reason to do an elective declaw surgery. Why else would veterinarians do that to a cat? In an article I’ve provided below as suggested reading, it is mentioned about one Southern Californian vet that “he declaws every cat that comes in the door because it makes him between $75,000 and $80,000 a year.” Source

But there are people with compromised immune systems. The American Animal Hospital Association (AAHA) is a group that “strongly opposes the declawing of domestic cats and supports veterinarians’ efforts to educate cat owners and provide them with effective alternatives.” And their website states: “The U.S. Centers for Disease Control and Prevention does not list declawing as a means of preventing disease in either healthy or immunocompromised individuals.” Source

Is declawing ever okay? Elective declawing – no. But there may be times when it is medically necessary for a cat to have its claw removed, perhaps because of cancer or non-healing fractures. With these rare cases, it would usually just be one toe declawed, not the entire paw.

Now that we know that declawing is not the way to go, what can you do if you are worried about your furniture?

Full disclosure – I am not a veterinarian, nor do I have any medical background. I am simply someone who loves cats and wants to see them treated humanely. What I’ve stated above is generally widespread information and can be Googled and found at multiple sources. I have listed additional articles and sites here as suggested reading, along with the sourced bullet points above.

It’s about awareness, folks! Please help spread the word for Declaw Awareness Day on March 29th. Do you have anything to add about declawing?

Sophie loves her scratcher because she has claws!

57 thoughts on “The Lowdown and Dirty on Declawing”