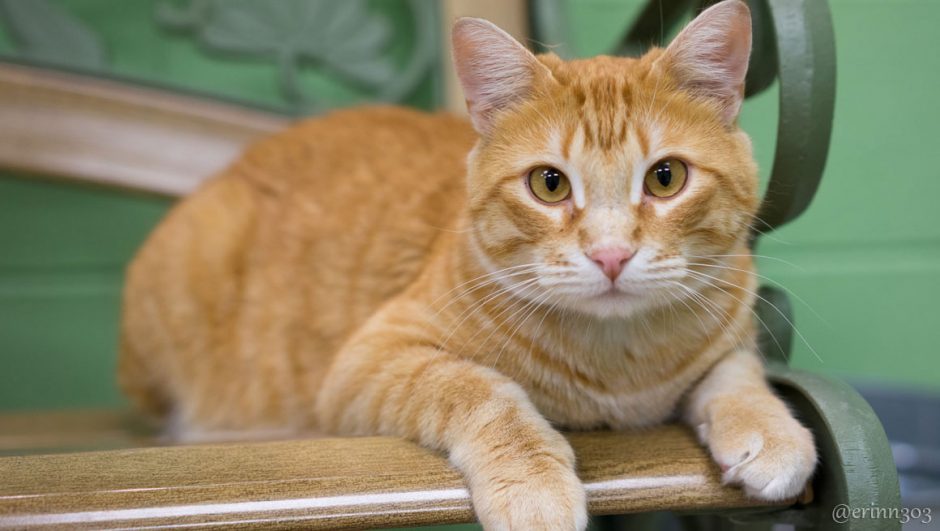 Erinn R. volunteers and takes photos at Adams County Animal Shelter located in Commerce City, Colorado. The government-owned shelter covers seven counties north of Denver. Erinn says, “It is an older shelter on the far side of town that doesn’t get as much foot traffic. I take photos in hopes to bring more people in to visit the cats and dogs.”

A Conversation with Erinn

When did you start taking pictures at the shelter?
I’ve been taking photos at shelters for three years now. I started off at the Boulder Humane Society shelter, which has more volunteers and money than the shelter I am currently at. There were other photographers there who taught me what makes a good adoption picture. I found out that the shelter that was closer to my home didn’t have a photographer, so I started to help them. 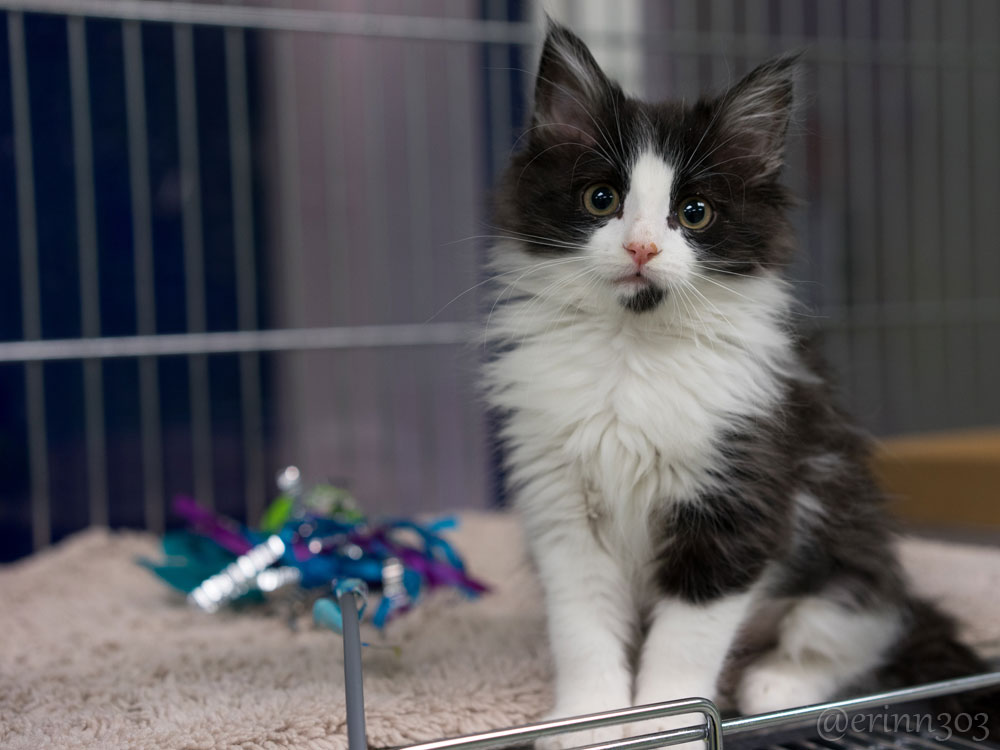 How often do you take pictures at the shelter?
I volunteer at least once a week, 2 hours a visit. During the winter, there aren’t as many cats so I only need to go once a week. However, in the spring (kitten season) and summer we can get up to 40 cats at a time, and I will go there 2 or 3 times a week to take photos. It is my favorite part of the week. 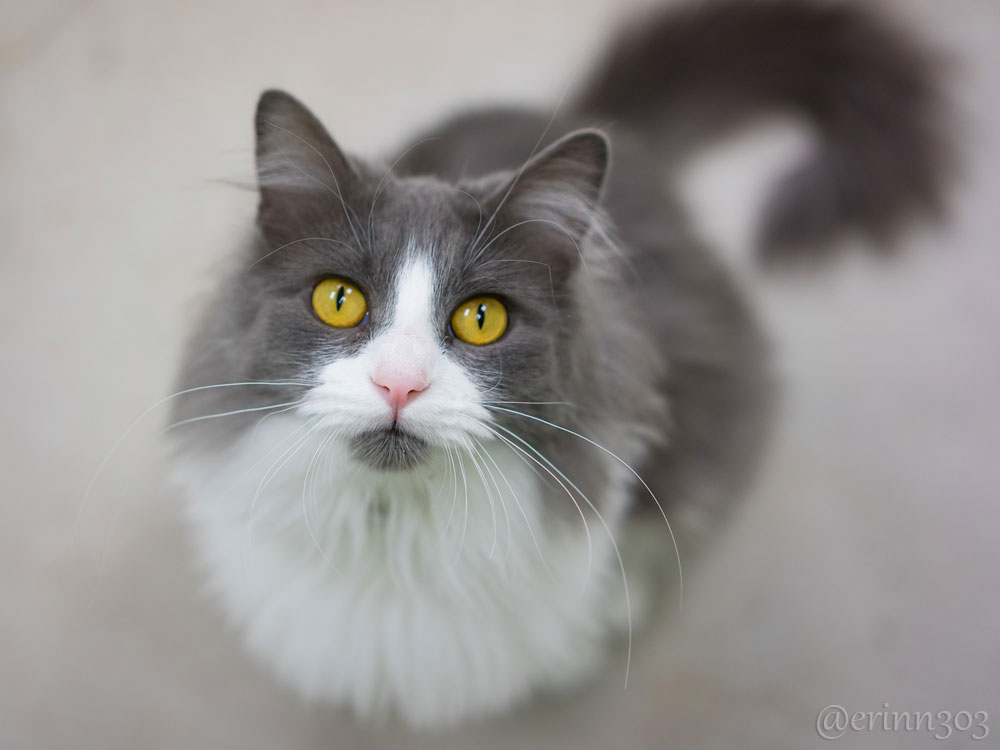 What inspired you to start taking pictures at the shelter?
Like many cat owners, I have always enjoyed taking photos of my own cats. I was ecstatic when I found out that shelters needed people to take pictures of their cats. I know that a lot of people pore over the adoption sites looking for the right cat (like Tinder), and I want to give the cats the best chance of finding the perfect family.

What surprised you the most about taking pictures at the shelter?
I probably seem crazy saying this, but cats really do have a smile. Sometimes I’ll start taking photos and they will just stare at me. However, if I pet them, talk with them and give them treats, I really do see the sweetness come out and that is when I get the photo. It really makes a huge difference. What is the hardest part about taking pictures?
One of the hardest things about volunteering at the shelter is seeing some cats not get adopted. Most cats will get adopted in one to two weeks, but sometimes there is a cat that will be at the shelter for months. The shelter I volunteer for does not euthanize for space, which means a cat can be there for however long it takes for them to get adopted. It takes a great deal not to just take all of the cats home. Eventually the cats do get adopted to loving homes. Where do you share your pictures?
I mainly take photos for the shelter so they can update their adoption site. They don’t have their own site, but they use PetHarbor. When animals first come in, they are stressed and people who work there don’t have the time it takes to get a photo of a calmer more natural cat. They do an intake photo, which often doesn’t portray the cat in the best light. So then I come in when they are more relaxed, sit with them for a while and get a what I call the “glamour shot.” Below is an example of an intake photo (left) and my photo (right).

What’s a fun stat you can share?
I have given 1,100 photos of cats to the shelter over the past year to use for adoption pictures. All of the cats I photographed have been adopted.

Do you have a cat that you photographed that especially touched your heart?
At least once a visit, I find a cat that I love and really touches me. I feel bad for the ones where their owner surrenders them and I want to take them all home. I have a very special place in my heart for calicos. This cat below was named Kitty, and she was there for a month, which I couldn’t understand. She was sweet and a very good subject. Thankfully she was adopted on Valentine’s Day by a special family. Do you have any pets at home?
I have two Scottish Fold sister cats who are 12 years old – Pixel is a calico and Muffin is ginger and white. This summer I fostered kittens and fell in love with two tabbies. (#fosterfail) They are currently eight months old. The boy is Sir Earl the Grey and the girl is Clawdeen. I was only going to keep one boy, but he cried when I tried to take his sister away, so I ended up keeping both of them. 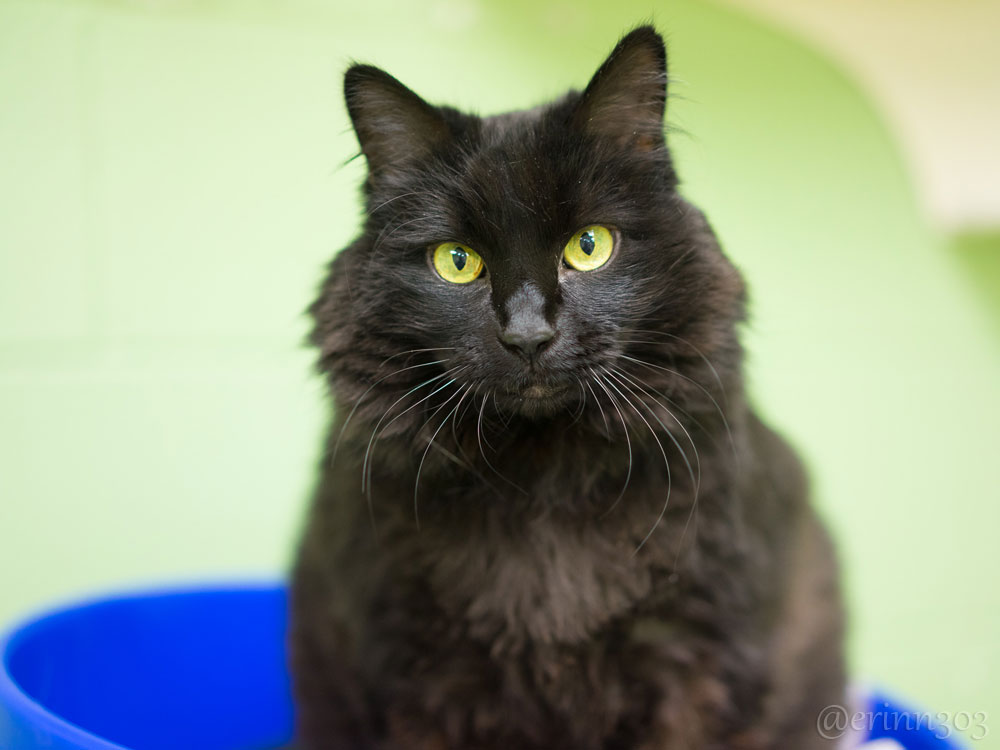 What’s your day job?
I work as a computer programmer.

Anything else we should know about you?
I fostered three families of cats this summer (moms and babies) and one mom dog and four puppies. It was a very full and fun summer. Erinn, your pictures are gorgeous! Thank you for sharing them with us and for helping shelter cats show their best side for adoption! You can connect with Erinn on Instagram via @erinn303. Erinn also shares her photos on Facebook.