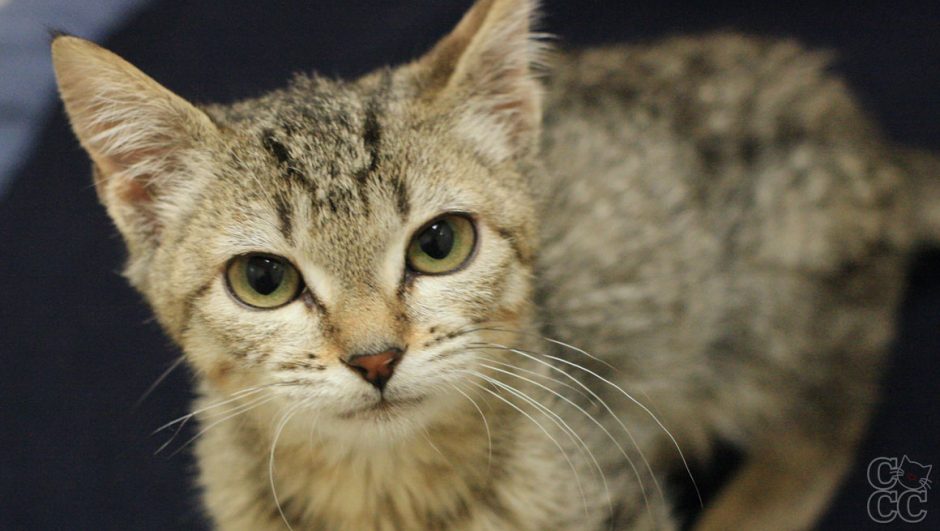 So far on Three Chatty Cats I have tried to highlight the positive side of rescuing by presenting cat rescue groups, foster parents, people who use their photography talents and those who do TNR. But rescuing cats and kittens isn’t always bright and cheery. And today’s post highlights the importance of TNR – and how it doesn’t always work out for kittens born to feral cats.

When I was in contact with SLU Campus Cat Coalition regarding their profile, Leyna shared with the me the story of two kittens, who sadly did not make it. And to reiterate the importance of TNR, I would like to share with you those two stories now. Although this is a somber post, I feel it is valuable to share. So, here is the story of Sundae and Button, who have both crossed the rainbow bridge.

Leyna shares with us Sundae and Button It’s not often that we lose kittens, but when we do, it only reinforces the importance of our mission. A few months ago, we lost sweet little Sundae. She was found in a hay bale at just about a week old, estimated to be born around September 1st, 2015. When Sundae stopped growing and was lagging behind her siblings, I took her in to give her some extra TLC, which was in early October. She did great at first, but one day went downhill very quickly. We brought her to three different vets within the span of about 12 hours. But in the end, her little body couldn’t fight anymore. The vet suspected that Sundae had underlying congenital problems that caused her to decline so quickly without any obvious cause.

Sundae’s death came one day after the anniversary of finding Button. Button was a tiny kitten that we found not long after our organization started. All by herself, late at night, scrounging for food at one of our campus feeding sites, we discovered what we thought was a kitten less than five weeks old. This was on October 28, 2014. Button was named after Benjamin Button because she looked and sounded like an old cat, but at the size of a baby kitten. Little did we know how spot-on that was.

Button meowing shortly after she was found.

While Button was the happiest, silliest kitten we’ve ever known, she never really thrived health-wise. She wasn’t growing at the normal rate, and she would have periods of lethargy that prompted many days in the hospital. After a few months of this up and down routine, we visited an internal medicine specialist. It turns out that Button got the jackpot of congenital issues. The reason she was so tiny was because she had a very rare condition called Congenital Hypothyroidism. She was essentially a dwarf. She wasn’t completely there mentally either and was mostly deaf, among other things.

Despite Button’s issues, veterinarians gave us reason to hope that tiny Button could possibly live a happy and pain-free life of 2 to 3 years. X-rays showed that she was actually around seven months old, which means she was three months old when we found her, not five weeks like we first thought. Her growth plates had almost completely fused, but she was less than two pounds and would stay that way.

Sadly, a few weeks later, Button began to have difficulty breathing. It was the final obstacle that she could not overcome and we had to say goodbye to our sweet little girl.

I only had Button for four short months, but it felt like years. I got so incredibly attached to this funny little girl. Her personality isn’t something I can fully put into words. She always had everyone laughing.

The short lives of Sundae and Button both make it painfully obvious the importance of TNR. Cats that reproduce out of control can easily have kittens with health issues. Whether it be as simple as overcrowded teeth, or as serious as a fatal congenital condition, the fact of the matter is that the vast majority of feral kittens born with serious issues will go unnoticed, suffer and die because no one is there to care for them.

While only with us for a short time, both Sundae and Button left a huge impact on our lives.

SLU Campus Cat Coalition would like to recognize that Button’s vet care was paid for by Cat Haven. She wouldn’t have made it nearly as long as she did without them. You can visit Cat Haven’s website or connect with them on Facebook.

Thank you to Leyna for sharing the stories of Sundae and Button.  If you would like to support the SLU Campus Cat Coalition and their TNR efforts, you can visit their YouCaring and Amazon Wish List pages. Or you can email campuscatcoalition@gmail.com for more information on how to help the CCC and their community cats! You can also find them on Facebook, Instagram, Catastic (@slu.campuscats) and Tumblr.

29 thoughts on “The Importance of TNR”