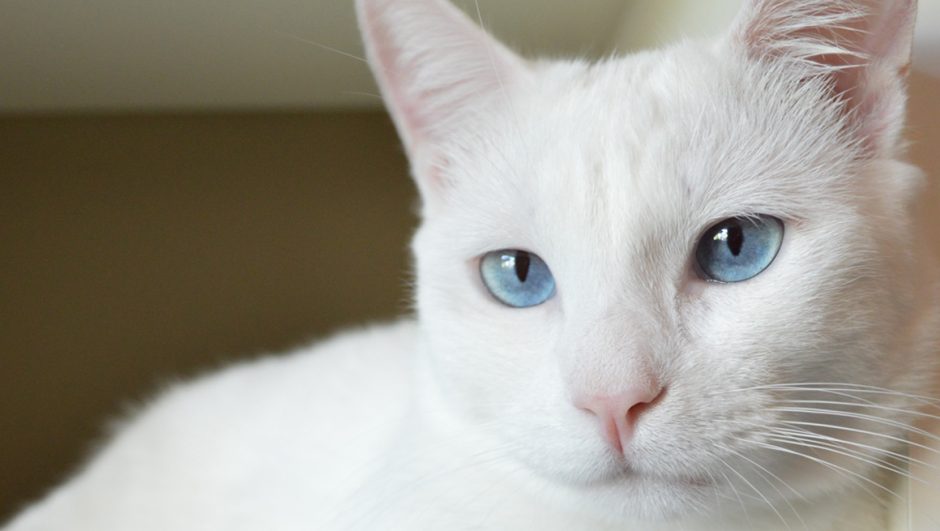 Rescue story: It was just another night out at the movies for humans Rachel and Ross. Rachel went to take a pre-movie bathroom break at the movie theater and saw a security guard standing outside the glass door with a white kitten circling at his feet. On her way back into the theater, she saw the security guard was now holding the cat. Unable to help herself, Rachel went outside to ask the guard what was going on. The first thing he said to her, “Do you want a cat?”

OF COURSE Rachel wanted a cat, but she already had two at home, not to mention a dog who would probably never speak to her again if she brought another cat into the house. Against her better judgement, Rachel went back into the theater to tell Ross she was going to take the kitten home and then come right back to watch the movie (Birdman). She took the kitten back to the house with the intention of finding her a forever home. Well, that home ended up being her own.

To her credit, Rachel did contact a cat rescue that was willing to take in the all white, blue-eyed kitten, estimated to be six months old. They said she’d go quick. Give her a fun “Christmasy” name like Noel or Snowflake and she’d be snapped up in an instant (this was two days after Thanksgiving, with Christmas fast approaching).

But as time went by (a day or two), Rachel couldn’t bring herself to give the sweet kitten away. So, she ended up being the third kitty of the household!

Dexter, just like with Olive’s rescue, took to Sophie immediately (he’s such a good boy). Olive, well… Olive is a different story. She and Sophie will never be friends. Occasionally, very occasionally, they may sit next to each other for a moment or two, but it’s usually an accident. And poor Eddie, the lone dog of the house (and 11 years old at the time), just couldn’t understand why his humans would keep doing this to him!

Sophie has been an endless source of entertainment to her humans. She is the ultimate goof! She has blue-BLUE eyes, is a little on the tubby side, very mischievous and loved wholeheartedly by her humans.

Here’s some proof that Sophie is a goofball!