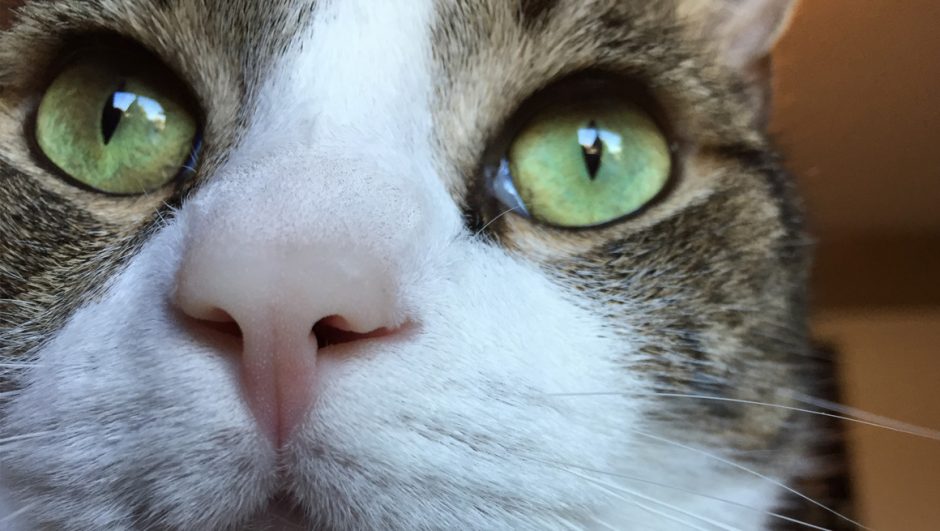 Name: Dexter (male)
Date of Birth: June 1, 2010 (approximately)
Date of Rescue: June 20, 2010
Likes: Shredding Kleenex, sneaking into the garage, cuddling with his sisters, grooming, looking grumpy, and eating Sophie’s special diet wet food
Dislikes: Everything else
Known for: Crying loudly in the morning until his mama human gets up to feed him

Rescue Story: It’s been several years since the humans stumbled upon the lost, scared, and starving Dexter on the mean streets of Palm Desert, California.

The date was June 20, 2010 – Father’s Day. It started out as any other scorching, mid-day dog-walking expedition through the back trails of a senior retirement community in the California desert, where Dexter’s future human servants were spending the day with the man human’s grandparents. While three dogs Eddie, Ben, and Artie led the way, the man human (Ross), woman human (Rachel) and mother-in-law human (Debbie) trotted along behind as the pack sniffed for a place to do their business.

Out of nowhere, a squirrel darted across the open path ahead, instantly grabbing the attention of all three dogs. But wait… was it a squirrel?

Ben was the first to react, racing after the tiny creature, who was desperately searching for safety (and shade) under a bush, Ross being pulled along for the ride by the standard (pretty much gargantuan) poodle. Upon arrival at said bush, the three humans crouched down to peek at what was causing the three normally docile dogs to bark like mad.

And there it was… the little kitten who was hot in the 100 degree weather, scared and starving. Ross scooped him up and took him inside to the comfort of air conditioning. After spending the day in Palm Springs, the humans took him home to Orange County. He had a gash on his upper lip (that he still has a scar from), big ears and dirty whiskers. They gave him a bath, a full bowl of food and fresh water.

The kitten would be known as Ellie for a short time… and then later become Dexter (after his second visit to the vet and when things were more ehem in place). Weighing only 12 ounces when found, the vet estimated the little bag of bones to be three weeks old, so June 1st was selected as his date of birth.

The once frightened three-week-old kitten, and first feline of the household, has since grown into a handsome cat, now older brother to Olive and Sophie. Does he rule the house? Who is he kidding? With two female cats, nope. Is he much loved by both humans and cats alike? Definitely!